We'll wrap up our 2012 Alternative NHL Awards with a look at hockey's great villains - the most frequent hookers, holders, slashers and bashers who end up serving time in the penalty box. There are many different flavors of on-ice criminality, and some players have made a real art form out of their preferred crimes...

Chairman of the Boards

Two players tied for the NHL lead with 5 Boarding penalties apiece, Anaheim's Luca Sbisa and Derek Dorsett of the Columbus Blue Jackets. We're going to give the Award for Outstanding Achievement in Boarding to Dorsett, however, given the fact that 3 of his 5 Boarding calls came in the offensive zone. We can forgive a defenseman for getting nasty protecting his own end of the ice, but Boarding in the offensive end? That's just stupid.

"Terrible" Ted Lindsay used to refer to his hockey stick as "The Great Equalizer", a multi-purpose tool that can not only be used to play the puck, but makes a pretty handy weapon, too. If we lump together all the vicious stick fouls into one category (Cross-checking, Slashing, Spearing) we have a runaway leader in Anaheim's Corey Perry, with 12 such penalties (as if you needed another reason to dislike him as a player). Three guys tied for second place here: Pittsburgh's James Neal, Carolina's Jussi Jokinen, and Vancouver's Alex Burrows. 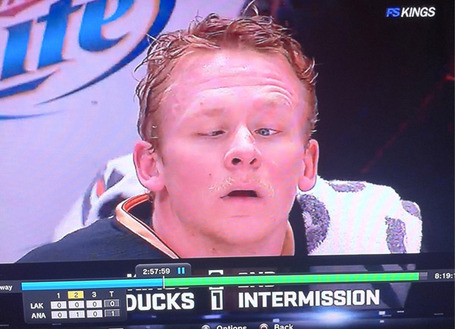 Hook 'em, Hold 'em, Do Whatever You Can

One of the signs of when a player gets beat defensively is how often they resort to obstruction-related fouls (Hooking, Holding, Interference, Tripping & Holding the Stick), so we'll categorize this as an all-around Sloppy Defender Award, won this year by Montreal's P.K. Subban with a total of 22 such penalties. Buffalo's Derek Roy came in close behind at 21, and we have a tie for 3rd place with Calgary's Mark Giordano and Vancouver's Henrik Sedin with 20 each.

Diving is perhaps one of the riskiest endeavors in all of hockey. On the one hand, it's a violation of sportsmanship and when executed poorly, serves as an embarrassment to the player and his team. When worked to perfection, however, a dive can draw a call which generates a critical power play opportunity for your team (and merely gets called "a savvy bit of embellishment"). Referees tend not to call Diving for what it is (there were only 33 such calls during the regular season), but the leader this year was Alexander Semin of the Washington Capitals, with 3. Nashville's Jordin Tootoo and P.A. Parenteau of the New York Islanders tied for second with 2 each.

Somebody needs to sit down with Phoenix Coyotes goaltender Mike Smith and explain the Trapezoid Rule. Smith was whistled four times for playing the puck in the dreaded "no-goalie" zone, which is as many as happened around the entire rest of the NHL this season. Four different tenders got called once each.

Driving towards the front of the net is essential for any aspiring goal scorer, but plowing the goalie over is another thing entirely. This year, Scott Hartnell of the Philadelphia Flyers led the league with 7 Goaltender Interference calls, just ahead of Ottawa's Nick Foligno and Detroit's Tomas Holmstrom with 6 each. What did those guys ever do to you, Harts?

Penalties don't get much more frustrating than bench minors for Too Many Men on the ice, and this year, the Florida Panthers led the way with 14 such calls (so much for that Kevin Dineen-for-the-Jack Adams Award talk, eh?). Following the Cats were the Detroit Red Wings with 12, then Dallas and Ottawa with 11 each. Among the most mathematically gifted teams were the Winnipeg Jets (2) and Los Angeles Kings (3).

So there you have it, another season's worth of penalty-related curiosities found by digging through the Play by Play files. Maybe one of these years I'll get invited out to Las Vegas to present these awards in person?