What many hoped to be a super sophomore season for Jonathon Blum turned instead into a step backwards, as he started out with the Predators but went back to Milwaukee for AHL duty before the halfway point.

After a season which went almost completely opposite to his 2010-2011 campaign, can Blum turn things around and reclaim a spot on the depth chart ahead of other young contenders working their way into the mix?

Based on the way 2010-2011 wrapped up, it was hoped that Blum could lock down a regular NHL job on the 2nd or 3rd pair at even strength, and contribute on the second power play unit, manning the right point in relief of Shea Weber while Ryan Ellis worked his way along in Milwaukee.

Heck, I even picked the guy as a depth option on my fantasy team. Whoops.

Perhaps the easiest way to describe Blum's even-strength performance is to use the recent Player Usage Charts 2011-2012 (PDF) published by Rob Vollman. Just read the PDF for the scoop, but there are really five pieces of information to take in here:

1) The placement of each player's bubble from high to low represents tougher or weaker competition faced.

2) Left vs. right reflects how often the player started his shifts in the defensive vs. offensive zone.

3) Blue bubbles reflect a positive influence on Shots For & Against, clear bubbles are negative.

4) The size of each bubble reflects how large that influence was (i.e. small & blue = mildly positive, big & clear = really bad).

5) Purple names denote defensemen, and an asterisk represents a player who switched teams during the year. 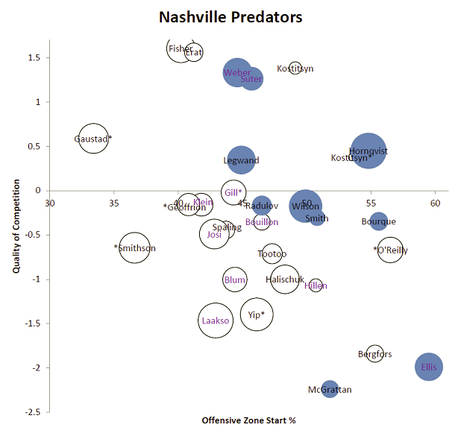 Blum generally played with and against 2nd-tier players, and like most of the team, lined up in the defensive end fairly often since the Predators as a whole got out-shot so much. He came out mildly underwater in terms of pushing Shots For & Against in the right direction, but what really made his season look like a stinker was the way the Goals Against piled up.

Last season, when his possession numbers were actually much worse, the hockey gods showered Blum with good fortune, with sky-high Team Shooting and Save Percentages (13.9 & .929) during his ice time. In 2011-2012, however, the pendulum swung the other way (10.1 & .888), with that save percentage being worst on the team by far.

Now, was Blum's play so horrid that he coughed up the worst possible scoring chances night after night, ones which Pekka Rinne couldn't handle? It's possible, and Blum did end up posting a team-worst -11 Plus/Minus in Milwaukee as well (we don't have fancy stats for the AHL).

Where Blum could have saved his figurative bacon, but failed, was on special teams. Despite 33 games of second-unit PP work, he didn't even record a single point with the man advantage, and the team popped in just 1.52 Goals/60 minutes of 5-on-4 ice time when he was out there (by comparison, the Preds finished the season scoring 7.6 Goals/60 in 5-on-4, and even in 5-on-5, they scored 2.5). The penalty kill was a bit of a grease fire, too (11.4 Goals Against/60 in 4-on-5 play, worst on the team by a country mile).

Blum scored the game winner back on November 3rd as the Predators skated into Phoenix and took a 3-0 victory over the Coyotes:

So, after two seasons of split duty between the NHL and AHL, we have a guy whose only positive impact in the big leagues came at the end of the 2010-2011 season thanks to ridiculously fortunate puck luck. The signs are tilting negatively right now on Blum's NHL future, but at age 23 there is still hope that he can develop into a reliable puck-mover.

With the number of young defensemen competing for ice time in Nashville, however, Blum is running out of chances. Stay tuned for what should be a very interesting competition during training camp this fall.