Nashville's sports radio landscape has been going through quite a bit of development lately, with the debut last year of a second FM sports radio station (and Nashville Predators flagship) in 102.5 The Game, and the battle for the attention of local sports fans will surely intensify over the coming months with the return of George Plaster to the airwaves. Now, one leading trade industry magazine is giving Music City some major props as a sports talk hotbed.

The debut edition of the TALKERS "Heavy Hundred of Sports Talk" features three Nashville entries among the nation's top 100 sports radio shows, a pretty impressive achievement when you consider the number of nationwide competitors (such as Dan Patrick, Jim Rome, etc.) and the fact that Nashville as a radio market ranks 45th in the country. One would think a city of our size would be lucky to get one, maybe two entries on that list.

Follow after the jump to take a look at the honorees...

All three shows, interestingly enough, come from 104.5 The Zone: 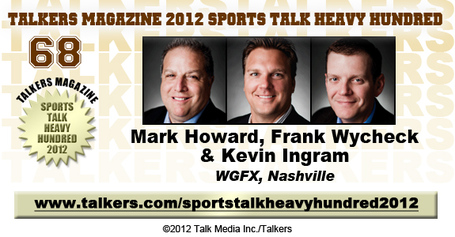 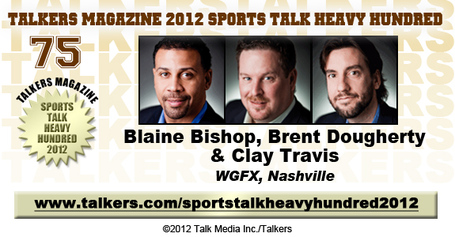 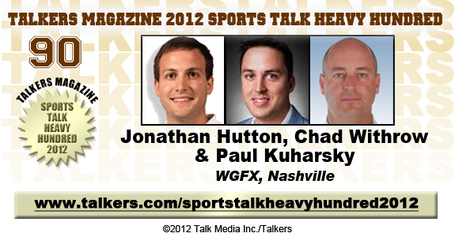 Congratulations to the Wake Up Zone, the 3HL, and the Midday 180, which all made the cut. Remember, folks, it's not whether you agree or disagree with the guys you see above, but are they engaging? Are they topical? Do they get the conversation going?

The answer is, absolutely. And as Nashville sports fans, the good stuff is just getting started...