While a full 82-game regular season NHL schedule still remains up in the air for the 2012-13 season, the beat will go on in the virtual world. NHL '13 is set for release on September 11, 2012, and we're slowly, but surely starting to learn more and more about the game.

Today, EA released the player ratings for Western Conference teams, which of course includes our beloved Predators. Follow after the jump for ratings (minus the new guy), OUTRAGE and a fancy graphic: 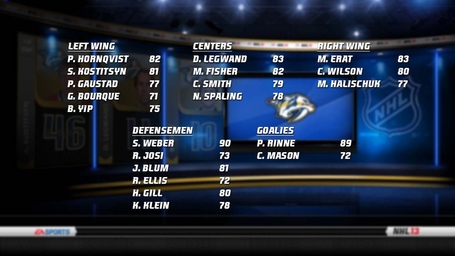 As a Predators fan, I think you have to be pleased with these ratings, because it looks like, for the most part, they went with the best case scenario.

A few things that stand out:

Thoughts? Comments? OUTRAGE of your own?

[h/t to @jrlind for pointing this out]