Share All sharing options for: Old Time Hockey Rebels: The "Love Me Littles" of Queen's University

It takes a rebel to change the course of hockey history.

Jacques Plante defied his coach in order to wear a goalie mask, quite literally changing the face of the game forever. Ted Lindsay stood up to the establishment to try and establish a players' union back in the 1950's, laying a foundation upon which the modern NHLPA is built.

Long before those legends came on the scene, however, back in the 1890's, a group of young ladies at Queen's University in Kingston, Ontario ignored the words of the local archbishop to pursue what was then a very new sport for women.

So let's take a trip back in time with OTF reader Linda Sparks, who related some remarkable background information and photos via email...

About two summers ago, unknown to me at the time, I was researching one of the first pioneers of women's ice hockey in Canada. Her name was Marion Fraser and I was to discover that she was indeed a very young and stubborn woman. At the time that Marion Fraser was making ice hockey history, she was merely eighteen years old and attending Queen's University in Kingston, Ontario, Canada. According to the Queen's archives Marion Fraser attended Queen's University from 1894 till 1896, and although she seemed to have struggled with her studies, Marion excelled in hockey, which was a feat in itself, considering that the Archbishop of Queen's had said at the time something to the effect that young women didn't play ice hockey, for it was greatly frowned upon.

Looking back in time, women's ice hockey in North America and in particular in Canada dates back to the 1890's, when it was first played at the university level. Queens's University in Kingston, Ontario was one of the first Canadian universities to field a women's ice hockey team - due to the determination and the strong will of the very young women, who at first, called themselves The "Love-me-Littles" back in 1895. Although the young women weren't getting too much support they still carried on with " very enthusiastic" ice hockey practices and in the following year of 1896, they became known as the Morning Glories and took to the ice!

The Daily British Whig of March 6, 1896 (P.1), reports the Morning Glories of Queen's College defeated the Blues and Blacks of the Ladies College in a "unique game of hockey":

Miss M. Fraser (centre or rover) scored one goal for the Glories in a 2-1 victory over the Blues and Blacks. Other members of the Queen's team were: K. McLean, goal; E.Griffin, point; M. Parker, cover point, N. Watson, centre; D. Yates, wing; and A. Brock, wing.

"Play was brilliant and free from rough house....The only thing uniform about their costumes was the length of their skirts which reached just to their boot tops."

It was also reported that "Miss Carr Harris repeatedly rushed and lifted the puck into the goal." And that she scored twice for the Blues and Blacks of the Ladies College."

Sadly, Marion Fraser died in Ottawa, Ontario, Canada in 1922 after falling out of window, that she had just opened for some fresh air.

Linda was prompted to do this research after she and her husband (who is Marion Fraser's nephew) came into possession of the hockey stick (autographed by Fraser's teammates) and photo from 1896 which you can see now in this exhibit at the International Hockey Hall of Fame in Kingston, Ontario. 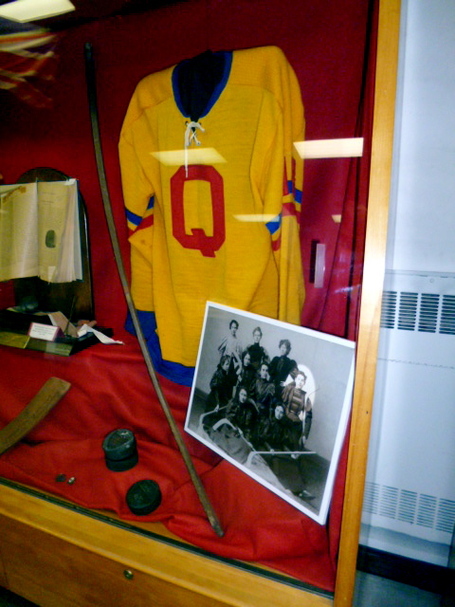 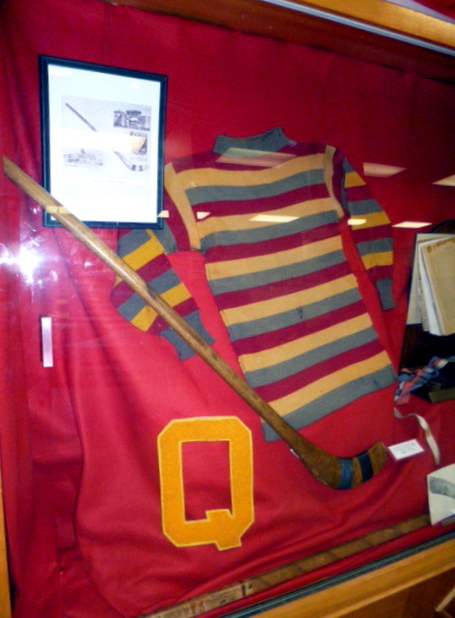 Hmm... I wonder where this gear would rank on the recent Uni-Watch list of NHL uniforms? It looks like the modern women's hockey team at Queen's University (now known as the Gaels) has kept much of that color scheme, and even the signature "Q" hasn't changed much.

Anyways, here's more on Linda, to whom I owe great thanks for this post:

While raising her three children, Linda Sparks began to write articles for a local newspaper in Aylmer, Quebec, Canada which lead to her having her own weekly column entitled The Faces of West Quebec which won the second place in the reader's poll as the most read column. One of the highlights of Faces of West Quebec was an interview with Canadian and fellow Aylmerite Dean DeBlois of Lilo and Stitch fame who had co-written and co-directed the animated hit film with Chris Sanders for Disney Films.

From there, she went on to interview the late Harry Elton, who was one of the original producers of television's long running soap opera Coronation Street and the voice heard on CBC radio as the host of CBO's Morning Show and the classical music programme Mostly Music.

She then took scriptwriting and producing courses at the Canadian Screen Training Center in Ottawa, Ontario, Canada before she went to work for the Ottawa-Gatineau Film and Television Office in the city of Gatineau, Quebec.

While working out of the OGFT office, Linda began to network as a location scout with other producers as well as directors from across Canada and abroad. One of her more memorable experiences while working in the film industry was working on the Rolling Stones video shoot Streets of Love at the Zaphod's club in the Byward Market in the city of Ottawa. Linda is currently working on writing her first fictional book for young adult readers about growing up and playing hockey in North America.