Now that we have seen pre-season games cancelled due to the NHL Lockout, and are likely to see regular season games get the ax relatively soon, the Nashville Predators have communicated a policy to season ticket holders outlining how they can get refunds for cancelled games. In addition, the team has offered a number of incentives for people to leave their funds with the team, which they are calling "Loyal Legion Benefits".

Follow after the jump for a look at the email which has gone out to season ticket holders...

We couldn't be more excited for the 2012-13 season to begin. Both on and off the ice, our organization has made moves this off-season, all designed to strengthen the team to benefit you, our partners and fans. Coming off our second straight trip to the Western Conference Semi-Finals, the Predators also ranked 14th out of the 122 professional sports franchises in ESPN The Magazine's Ultimate Standings that was recently released.

This offseason, we re-signed several key veterans and young players and are prepared to continue our quest for the Stanley Cup. We have been working aggressively to continue to enhance your fan experience and are confident that you will enjoy the upgrades and new initiatives inside Bridgestone Arena.

Our hope is for a quick resolution. The NHL remains committed to negotiating around the clock to reach an agreement that is fair for all parties and will allow for the long-term success and growth of the game we all love.

As we previously communicated, we will not process any outstanding payments nor will you receive any future billings until a new Collective Bargaining Agreement is reached.

Additionally, as we said in the previous communication, we have created the most attractive benefits plan for the best fans in all of professional sports. When you leave your season ticket investment on account during the work stoppage, you will receive credit up to the amount paid on your account equal to the dollar value of tickets for games cancelled and not rescheduled, plus 10.25% bonus credit (on an annualized basis) on those cancelled games. The bonus credits will appear on your account once a new CBA is in place and a revised schedule has been released. This credit and earned bonus credit on your account can be applied toward purchases of food and beverage, merchandise, select Bridgestone Arena events, single game tickets, 2013 Stanley Cup Playoff tickets or your 2013-14 season ticket renewal. Refunds for cancelled games are available as a second option, however if you elect to take the cancelled game refund, the bonus credit and corresponding benefits will not apply. During the course of the work stoppage the Predators will send Season Ticket Holders weekly updates on additional ways to use these credits in Season Ticket Holder Benefit alerts. You can view a current benefits summary here.

Furthermore, you will also receive 7,000 points in Smashville Rewards to use toward concert tickets, autographed items, meet and greets, once-in-a-lifetime experiences and special events at Bridgestone Arena. Smashville Rewards is the most dynamic benefits platform in professional sports and we use this program to reward you for your loyalty to the Predators organization. If you have not yet registered for Smashville Rewards, go to smashvillerewards.com to begin participating in the program today.

Here is the benefit summary mentioned in the email: 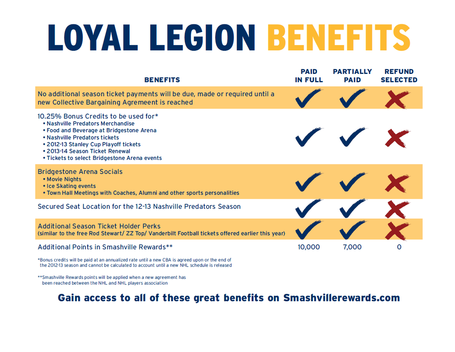 Clearly, the emphasis here is on encouraging people to leave their money with the team, but at least it sounds like the Predators are offering significant additional value if they do so. However, as I mentioned the other day (and this applies to folks in every NHL city, not just Nashville), if fans want to have any sort of input on getting NHL Lockout 2012 resolved sooner rather than later, they'd be well advised to put some action behind their words:

So if you're a Nashville Predators season ticket holder, what are your plans?