The Milwaukee Admirals kick off their season this weekend with a roster featuring some prospects that Nashville fans should be very interested in.

Join me in welcoming Jack Goods to the OTF Crew as our Milwaukee Admirals writer. Jack is a student at Marquette University this fall, and has contributed previously with our SB Nation colleagues at Die By the Blade (hence his heretical Twitter handle, @GoodsOnSabres). - Dirk

As the Nashville Predators are getting into the swing of things in the NHL season, their prospects in the AHL are just now ready to get things going. The Milwaukee Admirals kick off their season this weekend with games on Friday and Saturday against the Abbotsford Heat (AHL affiliates of the Calgary Flames) as they try to replicate the success of last season's squad, which finished second in the Midwest Division before falling in the opening round of the Calder Cup Playoffs.

This year's roster features many of the same names as last year, including head coach Dean Evason, who begins his second season behind the Admirals' bench. This is the first "normal" season under Evason, as last year's NHL lockout led to a lot of uncertainty with the team's roster.

"Last year with the lockout we didn't know if we were going to play in the NHL," said Evason. "The guys know they're here. They're here to battle, to win hockey games, and get to where they all want to go: the NHL."

The Admirals boast a few players who have already gotten some time up in Nashville, as well as some players that are right on the cusp. Among these players is Austin Watson, the Predators' first round pick in 2010. 2012-2013 was his first professional season, and despite playing a majority of the season in the AHL he did get a taste of the big leagues. He played in six games for Nashville, scoring his first professional goal.

"I want, as well as everyone else here, to play in the NHL but at the same time we’re focused on our trip to Abbotsford," said Watson. "I’d just like to keep playing well and do whatever I can to help our team win. I was fortunate enough to have a good middle end of the year last year and I’d like to continue to build on that."

Watson showed a lot of promise in his first pro campaign, finishing third on the Admirals in points with 20 goals and 17 assists. He believes the biggest adjustment, and what he's learned the most from his first year playing with men, is to keep his feet moving and keep on pace. If he continues to produce the way he did last season, he could set himself up to join Nashville for a longer period this year.

Also returning to Milwaukee is Taylor Beck, entering his fourth season with the Admirals. He got his first chance in the NHL last season, playing in 16 games in which he scored three goals and added four assists. Beck, one of the two players on last year's team who scored more points than Watson, will likely be called up at some point as well.

Goaltender Magnus Hellberg came over to North America last season from Sweden, and it took him some time to adjust. However, his game heated up at the end of the year, finishing off the season with an 18-7 stretch. He looks to build upon that finish in his first full year as the starter.

"He did all the right things as far as getting himself into physical shape, mentally learning the North American game," said Evason about the young goalie. "If you watch him from game one to the last game he was not only a completely different goaltender but a completely different person as well. He’s an extremely mature player, his teammates love him and we expect him to teach our younger guys."

Hellberg suffered an injury that kept him out of some of camp, but he believes that's all behind him now.

"Its unfortunate he had a little bit of an injury in camp and wasn't able to participate at his highest level," said defenseman Scott Ford. "He's been great. Obviously down the stretch last year he was fantastic."

Joining Hellberg in goal is Marek Mazanec, who like Hellberg last year, will be playing his first year of North American hockey. The Czech-born Mazanec was the Predators sixth round pick in 2012 and has already seen some playing time in the top league in the Czech Republic. The Admirals hope that his transition can be a bit faster than Hellberg's was.

"He had a fantastic camp in Nashville as well," said Ford on Mazanec. "He’s going to push Magnus [Hellberg] right to the limit. I think its going to be a great tandem."

Ford returns to the Admirals for his first full season since his trade from the Blues. This is his second stint with the team. He played in Milwaukee previously from 2008 to 2010.

The Ads are missing a few key names from last season, including players such as Zach Hamill, Michael Latta, and Mattias Ekholm, but they have added some names that should fill in the holes quite nicely.

New Kid On The Block 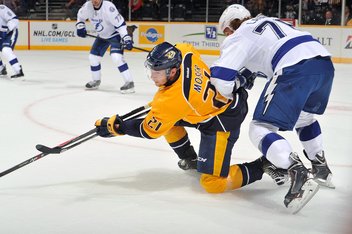 New to the team this season are two Nashville second round picks in Colton Sissons and Miika Salomaki. Sissons joins the team after his most impressive year in juniors, where he scored 67 points and was an incredible +43 for the Kelowna Rockets. Salomaki has already been playing in Finland's top professional league, the SM-Liga, with Karpat for the past three seasons. The speedy forward looks to make waves early on in the AHL.

One of the surprising members of the team is Simon Moser, who Nashville signed to a contract after a successful tryout recently. With a great deal of experience, including international play with the Swiss national team and scoring 110 points in the Swiss Elite League last season, he should be a name to watch as Moser hopes to prove that he can produce on this side of the Atlantic as well.

No Blueline Promotions... For Now

From a Nashville perspective, it doesn't appear that any defensemen will be called up at this point to replace the injured Roman Josi, at least according to Evason.

"At this point no," said the coach on a possible defensive call-up. "They play tonight, we'll see what happens... As we do in the minors we watch the games, we read the injury reports, and then talk to them after."

Overall the roster is solid, with plenty of names that Predators fans should keep an eye on. The goal is clearly to make the playoffs again, but as for the greater picture Evason hopes to ingrain the style the whole organization prides itself on, which he described as "hardworking, gritty, hard to play against, fast, [and] competitive." On Friday the journey begins for the top guns, as each player attempts to prove he's worthy of a spot in Nashville.