Was he the most beloved Predator of all time? No, but he was a damn good hockey player, and the Preds could certainly use a center of his stature once again.

Arnott played for six teams - Edmonton, New Jersey, Dallas, Nashville, Washington and St. Louis - in his NHL career. He played in 1,244 NHL games, while scoring 417 goals, 521 assists and 938 points, and recording a plus-minus of +81 and 1,242 penalty minutes. Arnott's career was highlighted by his Stanley Cup-winning goal for the New Jersey Devils in double-overtime in game six of the 2000 Stanley Cup Final against the Dallas Stars.

"I would like to thank everyone who helped me throughout my NHL career, including my family, friends, teammates and fans. Playing in the NHL was my dream, and I am very proud and appreciative of the fact I was able to play at the highest level for 19 years, with the best players in the world," said Arnott. "Each of the teams I played for provided me with great experiences and memories, and our Stanley Cup team in New Jersey certainly stands out among all of them."

Here in Nashville, Arnott played four seasons, including a stint as captain from 2007-2010. He still ranks fourth on the team in career goals, and his 33 in 2008-9 remain a franchise best.

Of course, along the way Arnott fought his way through multiple injuries, including the infamous concussion which Alexander Radulov gave him during the 2008 playoffs against Detroit, just after the captain scored perhaps the most exciting goal in team history: 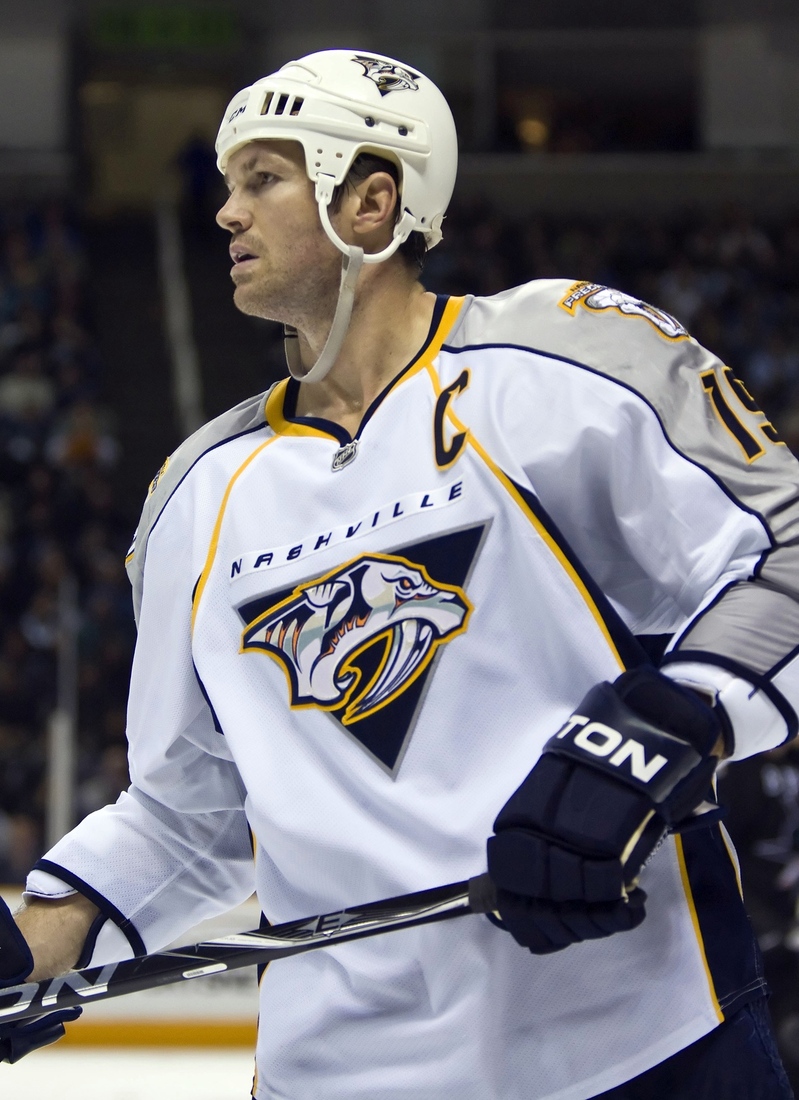 Back in 2009 OTF readers voted on an all-time Preds team, and Jason Arnott won handily at the center position.

While not enjoyed by some fans who didn't appreciate his relatively low profile for an NHL captain and sometimes surly manner, I remember being really impressed when the Preds signed Arnott, recalling him as a strong center who burst onto the scene in Edmonton before playing a key role on excellent teams in New Jersey and Dallas. Simply put, his move to Nashville was a signature statement by David Poile as he assembled a legitimate Stanley Cup contender for the 2006-7 season.

To my mind he doesn't get enough credit as a leader who stepped into a void following the Great Fire Sale and helped the Preds defy convention by making those 2008 playoffs. He tried his best to get the 2008-9 squad back to the post-season after Alex Radulov jumped ship (recall him returning to action early from a concussion and scoring goals like crazy down the stretch), and led a deep 2009-10 team into the playoffs against Chicago, where he disappointed with just one goal as the Preds were defeated by the Blackhawks.

During the summer of 2010, he was traded to New Jersey in exchange for Matt Halischuk, when it became evident that the team was looking to head in a different direction rather than extend Arnott a new contract.

Was he the most beloved Predator of all time? No, but he was a damn good hockey player, and the Preds could certainly use a center of his stature once again.

Jason Arnott retires today. He's 90th in NHL scoring and 79th in games played. Only five active NHLers have played more than him.