Well it's about time I got started on these again, and there's nothing like the New Year and a swift kick in the rear to get going! I'm excited that the Preds actually won the game I decided to write up, so maybe I should do these more often... Let's take a look at the final two goals of the Preds vs. Kings game from Saturday.

Normally I would post a video of the goal so you could watch it first, but NHL.com's video highlights are throwing a tantrum and I can't find a link to any highlights on YouTube either, so let's just get started instead. 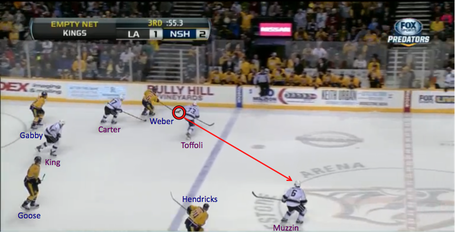 This goal actually started with a bad outlet pass from Shea Weber that was intended for Matt Hendricks. Unfortunately, it never got to Hendricks and was instead picked up by Jake Muzzin. Neutral-zone turnovers FTW. Oh, also worth pointing out (just in case you forgot), is the fact that LA has pulled their goalie, so it's 6 on 5. 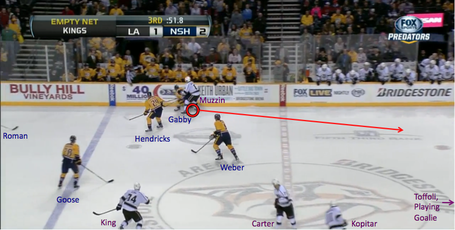 After a little bit of back and forth in the neutral zone, LA regains control of the puck over by the Preds' bench. The sudden change in possession and positioning has left the Preds a little bit disorganized and heavily clustered on the bench-half of the ice. All of LA's forwards, however, are waiting for the puck on the pretty wide open other side of the ice (except for Tyler Toffoli, the 6th man, who I assume is covering for their absent goalie). Man, that could have gone badly, eh? 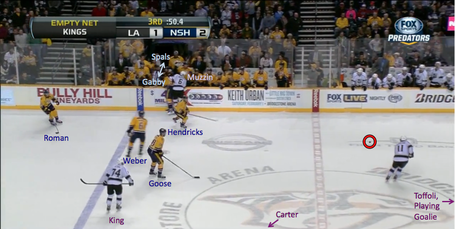 Muzzin wins the puck battle and passes it back to Kopitar, since Toffoli is still on the ultra-defensive. The Preds take this opportunity to regroup (and take a line change, Gabby for Spals) and reorganize just a little bit. Kopitar circles back down into his zone to let his teammates also regroup, and then the puck gets dumped into the Preds zone. 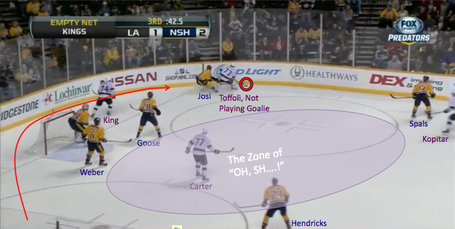 The Preds have regrouped and look much more organized, but there's the ever-present problem of covering the high slot, which I have more accurately labeled here as The Zone of "OH, SH....!". As we all know, this is just really not a good place to let guys pull up a chair and stay a while, because it rarely goes well. Here, we can see Jeff Carter casually coasting through this zone.

Toffoli decides to join his buddies, and he and Josi battle for the puck along the boards. Dwight King is the Kings' second man into the battle, and once Kopitar joins the fun (not pictured), Goose scoots over to help Josi out. The problem is that this leaves Jeff Carter, who would normally be somewhat of Goose's responsibility, all by his lonesome. 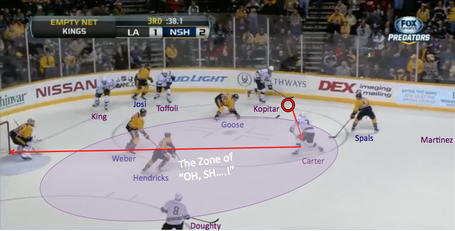 Nick Spaling is valiently trying to split the distance between Alec Martinez (out of frame) and Jeff Carter to cover them both. This indecision ultimately leads to Carter's goal. If Spals had just ignored Martinez and covered Carter instead, the puck would have gone up to the blue line instead of to a wide-open sniper. If Spals did anything but exclusively cover Carter, who has approximately zero-to-one Predators on him, is hands-down the more dangerous player of the two, and is certainly in a better position on the ice than Martinez, something bad is probably gonna happen. And amazingly enough, something bad did happen. 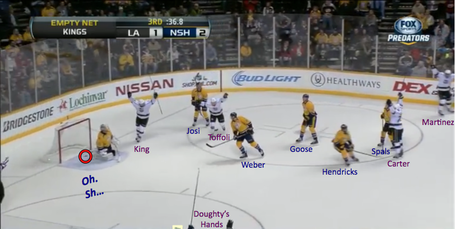 Joffrey Jeffrey Carter scored, tying the game 2-2 with 36 seconds left. For most teams, never mind Nashville, this would be the end of the game... 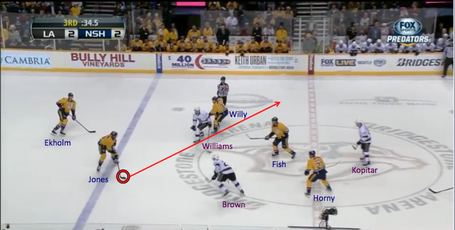 Nashville wins the face-off after the tying goal, and Seth Jones sees Colin Wilson about to make a break for it across the ice. It's kind of a bold move, but he threads a pass through a few Kings' sticks and Willy gets ahold of it. 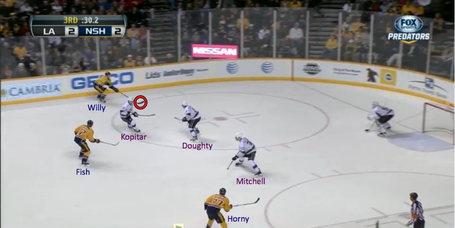 Willy makes his way down the sideboards with Kopitar keeping an eye on him, when Kopi notices that Mike Fisher is tagging along just far enough behind the play to end up in The Zone of "OH SH...!". He cuts over towards Fish, and Doughty trades him for Willy. 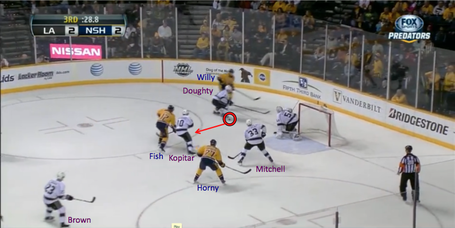 Now what I can't capture in picture form is Mike Fisher quickly sneaking his stick up and over Kopitar's. This tiny adjustment gave him the freedom to move, and prevented Kopitar from really doing anything to impede him. Smart move. Willy sees Fish with the opening... 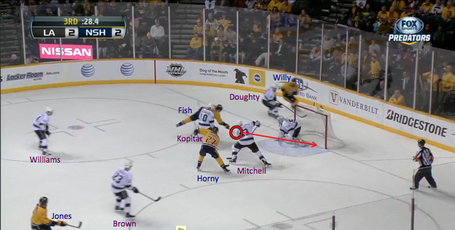 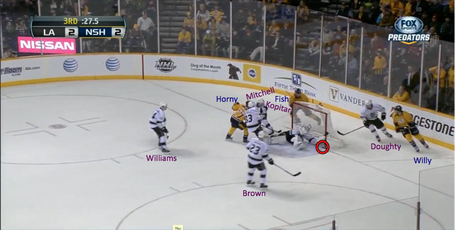 For a second it looked like Ben Scrivens actually had the puck, but then it trickled over the line and behind the post. Just 10 seconds after Los Angeles tied it up, Fish scored his second of the night to win the game with 27 seconds left in regulation.

I don't think anyone expected that ending, but what a happy one it was! 2 point nights are the best nights.