Concussions in the NHL: The Tale of Jason Arnott, Alexander Radulov, and Exuberant Celebrations

As part of SB Nation's series on Concussions in the NHL, Caroline takes a deeper look at perhaps the most unusual and impactful concussion in Nashville Predators history...

Share All sharing options for: Concussions in the NHL: The Tale of Jason Arnott, Alexander Radulov, and Exuberant Celebrations

In 2008, the Predators had finished the regular season with 91 points (41-32-9) and had snagged the 8th seed in the playoffs. It was a great year for Jason Arnott, who finished the regular season with 72 points - a mere four points below his career high. The Predators were up against the first seeded Detroit Red Wings, and had not been fairing extremely well. Down 2-0 in the series, the Preds came back to Nashville for the next set of games. During Game 3, the Predators scored two goals in nine seconds. This ended up being the second of three times in this series that the Predators scored two consecutive goals within less than a minute of each other (Game 2: 2G/11 sec.; Game 3: 2G, 9 sec.; Game 4: 2G, 32 sec.). I actually didn't know that before writing this article, so that was a pretty cool fact to stumble across. Hold on to that one; I'm sure it'll come in handy some day.

Let's take a look at those 9 seconds, shall we?

After an eventful first two periods (two goals for each team, 5 PKs, 3 PPs) and a quick Detroit goal to start off the third period (40 seconds in), the Predators finally came roaring back to finish off the game. Ryan Suter, who was just 23 at the time, struck first - his second career playoff point - with a slap shot from the left point. The game was tied at 3-3. The team celebrated, and the Bridge Sommet went crazy. Everyone lined up again, and before the commentators could even finish discussing Suter's goal, Arnott ripped another slap shot past Dominik Hasek from the right face-off dot.

Guess who was really excited about that? 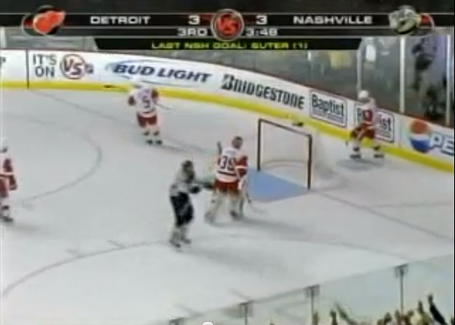 Arnott crouches, preparing himself for the hug... 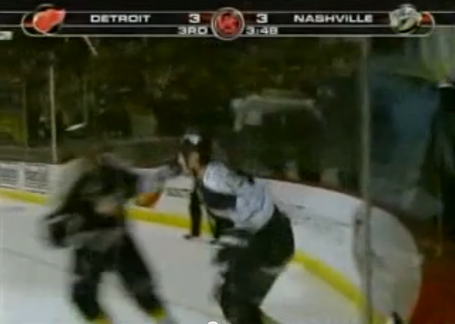 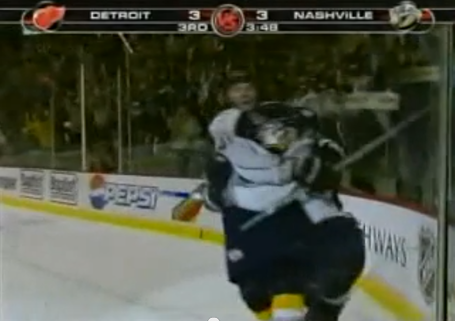 What happened next, no one could have predicted.

Despite Arnott preparing himself for Radulov's leaping hug, the momentum caused him to lose his balance and fall backwards... into the dasher. 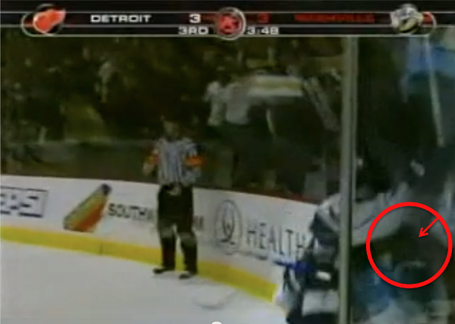 Because someone took this video with a potato, it's almost impossible to see where Arnott's head lands from just a screen cap, so I included an arrow. What's labeled above is the back of Arnott's head smashing against the dasher board, while Radulov cheers enthusiastically above him. 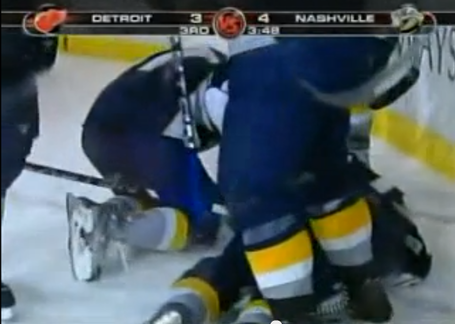 ...Clearly this did not end well. Arnott laid on the ice for a few seconds before being helped to his feet by his teammates. He skated slowly onto the bench, and talked with the trainer.

Believe it or not, Arnott actually came back for the next game (#4), and had a solid 18 minutes (17:56) of playing time. He took one shot, blocked one shot, had one hit, and was +1. He also took a puck to the head during that game. After the game, the Predators flew out to Detroit. Following the morning skate before that night's game, Arnott began to feel "ill" and was scratched from the remaining games. Concussion awareness/interest wasn't exactly at its peak in 2008, so not much information was released about the details of Arnott's injury, though possibly because not many people seemed to ask for any.

What happened to the Predators?

The 2007-2008 season was a strong one for Arnott. He finished the regular season with 72 points in 79 games (0.91 P/G-%age) and was second on the Predators in scoring behind JP Dumont. He had one point his four playoff games that year, but with extensive playoff experience (100 GP) and a career playoff point percentage of 0.64, he was an invaluable asset to the still relatively young Preds.

The series was tied 2-2 when Arnott fell out of the lineup, and the Red Wings went on to win the next two games. Across the first four games of the series (while Arnott was still playing), the Predators scored 11 goals, and the Red Wings scored 12 goals. In the final two games (in which Arnott did not play), the Preds only scored 1 goal, while the Red Wings scored 5. It's debatable as to how much of change that can be attributed purely to Arnott's presence/absence, but as the captain of the team and as one of the most experienced players on the team, it almost certainly played a large role.

What happened to Arnott?

Arnott came back for the 2008-2009 season and set the still-standing franchise record for goals scored by one player in a season (33). He was the recipient of another heavy hit in March of 2009, which took him out of the lineup for several months, and he returned [probably too] early in hopes of helping the Preds make the playoffs (they didn't). He played one more season with the Preds (during which he received yet another concussion in the spring) before being traded to New Jersey for Matt Halischuk and a 2nd round pick.

Something I find worthy of mentioning is Arnott's point-per-game percentage throughout the remainder of his career. Whether the result of age, multiple concussions, or a combination of both, Arnott changed after the 08-09 season. He began the slow decent from NHL-star to high-end mediocrity, and he wasn't really ever able to turn back:

As we all know, he was turned away from the New York Rangers this year after failing to pass their physical. At this point, Jason Arnott's career is basically over, as it's highly unlikely that any other team will want to take a chance on him.

The Radulov/Arnott incident serves as proof of the unpredictable circumstances in which concussions can be received. Most players receive a concussion as the result of a poorly timed and/or illegal hit or elbow to the head, but concussions do not discriminate. It is important for players and fans alike to remember this. Nothing can ever be taken too seriously when it comes to head-related injuries. Jason Arnott had a long and successful NHL career, but the multiple concussions he sustained during his final few years had to have affected his ability to play to the best of his ability.