Nashville Predators vs San Jose Sharks: The Fight in Section 114

Last night, about half way through during the third period of the Preds/Sharks game, a fight broke out in Section 114 of the Bridge. Many fans from around the arena documented their experiences of the fight. These are their stories.

Share All sharing options for: Nashville Predators vs San Jose Sharks: The Fight in Section 114

Last night, I was happily (sorta) watching the Preds on Center Ice and hanging out in the GDT. It was the third period, things were starting to pick up a little bit, and I was feeling a bit better about our chances. Then the fans started booing. This irked me a little bit, as I was under the immediate impression that they were booing the Preds despite the fact that they had gotten their act together (and held it together relatively well) after the first period. A few other GDT participants noted the fans' change in tone as well, but no one was really sure what was going on until someone made the announcement:

"There's a fight in the stands. Section 114." (Thanks to DonBorvio for keeping an eye on Twitter during the GDT!)

After the game, I went on a Twitter expedition to see what records I could find of the fight. Some are more extensive than others, but no report was as thorough as Chris Burton's. His paragraph is at the very end.

Disclaimer: We recognize that these were the actions of one individual, and that they do not reflect the character of the entire San Jose Sharks fan-base.

Editor's Note: We don't normally devote space to events like this, but they are exceedingly rare at Preds games, and I think it was worth sharing with those who only caught fragments of the story. - Dirk

Update: Earlier this evening, I received an email from a gentleman who, while on the town after the game, ran into both the Preds and Sharks fan involved in the altercation (separately). According to him, neither fan was arrested. He and a friend took pictures with both fans, and the Sharks fan appeared to be in good spirits. - Caroline

@PollakOnSharks: Ugly, ugly fight breaking out in stands here. #SJSharks jersey on at least one of the combatants. Ridiculous.

@puckscenedotcom: We have a brawl between a Sharks fan and several Pekka Rinne shirts in Snowbird’s Ice Box. #preds #sjsharks

@ThePredatorial: A female Sharks fan just got booted from section 104. Not sure why.

The Fight Goes Down

@Bucklette117: Sharks fan flies backward downstairs toward ice. Sharks players start noticing and watching. Security comes out of no where

@ebee228: @nickmcduffie he was heckling a preds fan, then said "you wanna go?" And went up to the preds fan and ended up tumbling down the steps

@ThePredatorial: It's not good, either. Sharks fan goes flying down the stairs, #Preds fans jump on. (Section 114, my mistake).

@chaseallister: Did everyone see the Sharks fan whiff on the haymaker and then do approximately eight backflips down the stairs? Best.

@chaseallister: Preds fans are the best fans. Dude Matrixed the hell out of the Sharks fan haymaker then tossed him down a whole section.

@Krazykylepreds: No matter how drunk you are, never fight on stairs. Never.

@ThePredatorial: So far, 3 stars of the game: Rinne, Niemie, Preds fighter in 114

Pictures of the Fight

@snyder023: Fight at the Preds game was awesome! Oh, did I mention it was in the stands! 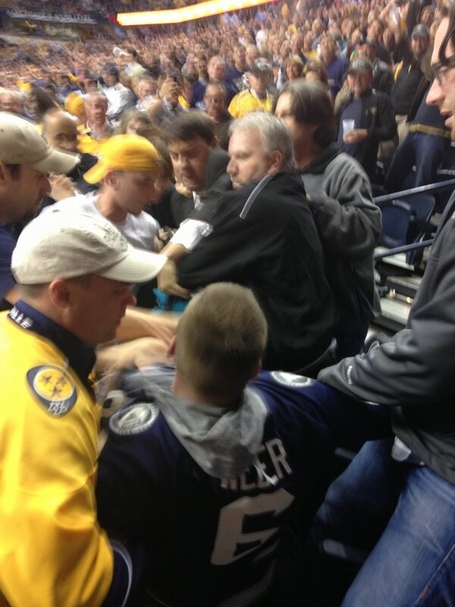 Thanks to vols7381 for providing the link to the next two pictures (click to enlarge): 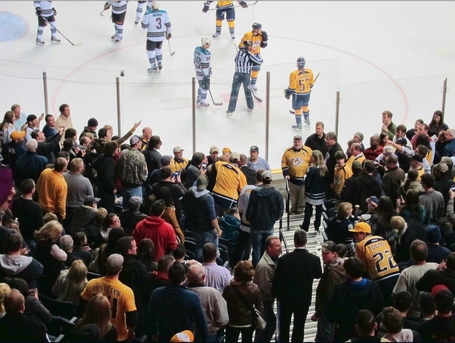 If you look carefully, you can see the two gentlemen in the khaki hats from the tweeted pictures in this picture as well. I'm guessing they were taken at almost the exact same time. 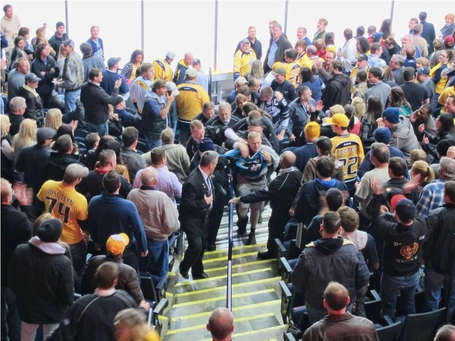 Aaand there goes the disgraced Sharks fan (just moments after his girlfriend was ejected).

Video of the Fight:

Update: Here's a look at the altercation from far away:

I was also able to find a close-up video. It's literally 3 seconds long, but you take what you can get:

The Entire Tale, by Chris Burton

The fight reporter of the evening, online at least, was Chris Burton (@predatweeter), who sent out about 20 tweets describing the whole event, the discussion he had with an involved fan and his girlfriend, and answers to questions from his followers. I've taken the successive tweets and shoved them all into one big paragraph to make them easier to read.

Was in the section over from the fight in the stands, saw it all. Really brutal. And sad. Sharks fan yells obscenities/flies bird at her whole section – she’s ejected. Fans cheer, her boyfriend gets angry, starts same thing. Boyfriend asks Preds fan six rows away to fight – he comes down stairs, they go tumbling down several rows, throwing punches. Sharks fan rails on Preds guy till everyone else in the section goes to break it up. Sharks fan gets tangled in his own shirt, takes beating. Bunch of guys in Preds gear jumped on him till it was diffused. Definitely blood, arrests. Ugly. Booze clearly involved. Don’t condone Preds fans actions, but largely self defense/helping. Hated to see it. From what I saw, most Preds fans attempted to break it up. Sharks fan kept throwing punches/yelling after being detained. Finally, multiple people escorted out of the stands. Too bad, missed a good ending – thanks to @TheViewfrom111 for the great seats.

Will point this out for those who don't go to Preds games - I've been going since 2007 and [have] never seen a single fight.

I mentioned this briefly above, but earlier this evening, I received an email from Preds fan Troy Lozano, who ran into both the Preds and Sharks fans involved in the 114 fight. He sent me pictures he and a friend took with both fans and gave me permission to publish them in the article. He also told me a little bit about what they said in regards to the fight.

Lozano and his friend ran into the Predators fan immediately after the game at Honkey Tonk. He was a man of few words, but in respect to the fight, he did say that he "didn't want to be that guy". He wasn't injured in the fight. He was also happy not to have been arrested (obviously).

About two hours after the game, Lozano and his friend saw the Sharks fan at a gas station on Broadway. He's from Birmingham, AL and he came up to Nashville for the game. He said that he likes Nashville and has no problems with Predators fans. He also seemed "pretty ashamed of his actions, like the Predators fan" and was similarly thankful that he had not been arrested. 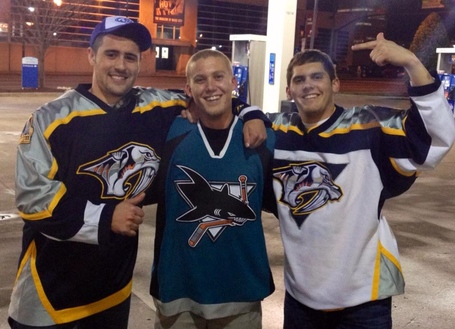 The Moral of the Story

If you're a visiting fan who doesn't always know when to say when, make sure you have a friend with you who will let you know when you've gone to far. I'm sure both of those guys are really nice and friendly people, but all everyone knows is that they're the dudes who started a fight in the stands. Don't be "that guy". It's not cool for the home fans, it's not cool for security to have to deal with, and it's not cool for your fan-base, because they end up having to defend your actions.

Let's just be glad this ended as well as it did, and hope it never happens again.