A proposal to realign the NHL for next season was discussed tonight on Hockey Night in Canada, and it would see Nashville lose the Detroit Red Wings as a close rival in a four-conference setup.

Eliotte Friedman rolled out a realignment scenario along the lines of something that was put forth last season as well, but shot down by the Players Association prior to the CBA negotiations and subsequent lockout.

Here's the layout that was discussed, thanks to a couple tweets from Nick Cotsonika:

Look folks, I know people will miss Detroit as a steady rival - but be honest, it's not a real two-way rivalry. Ask any Red Wings fan, and the Preds probably aren't in the Top 3 of their most-hated teams. Under a four-conference setup where teams have to work their way out of the division during the playoffs (which has been talked about previously), that's when REAL rivalries are developed.

Just look at the recent situation between the Preds & Ducks, or the Preds & Canucks. There's more juice to those rivalries than they have with St. Louis, which has been in their division all along. Since they've never met in the playoffs, however, that matchup hasn't risen above a simmer.

As for Columbus? I guess we'd miss the Blue Jackets like the Harlem Globetrotters would miss the Washington Generals.

But what do you think about this idea? 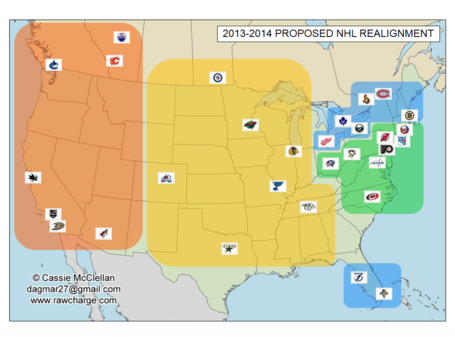