The battle to drive play into the offensive zone is one in which the Nashville Predators have struggled this season, but when you break the details down, a few heroes (and goats) emerge.

Rob Vollman of Hockey Prospectus has passed along his latest Player Usage chart for the Nashville Predators, which provides an individual breakdown of how Shots For & Against are flowing in an easy-to-read, visual format.

There are 3 pieces of information which go into this chart:

Make sure to check out the Hockey Prospectus 2012-13

(they do tremendous work with this annual tome), and click the picture below to get a larger view if you have to: 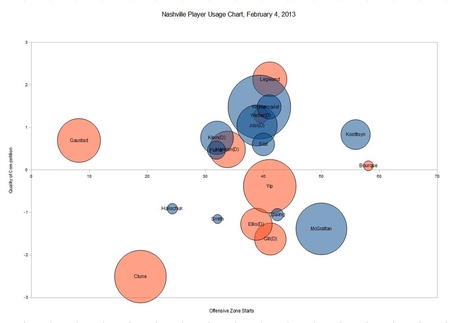 Colin Wilson stands out as the big star here, with a big blue bubble reflecting a strongly positive balance of shots for & against during his ice time, which comes against quality opposition and an average dose of offensive- vs. defensive-zone faceoffs (we should note that this is no fluke, as he stood 2nd on the team in this regard last season). As a team, the Preds are stuck in their own end more often than not, so most guys are to the left of that 50/50 mark. Yes, he only has one goal and one assist to show for his efforts so far, but the hockey gods will reward his efforts eventually.

The other guys faring relatively well are Martin Erat, Patric Hornqvist, Roman Josi and Sergei Kostitsyn (although SK74 has enjoyed the benefit of being deployed in more offensive situations). Brian McGrattan's numbers would look more impressive if he played a regular shift, against regular players.

Brandon Yip stands out as the player whose basic stats (2 goals, 1 assist) overshadow troubling puck possession fundamentals. Is he this year's Matt Halischuk?

Trouble has also been brewing on that third defense pair, as Hal Gill & Ryan Ellis are struggling a bit even against relatively weak competition. Keep an eye on Jonathon Blum to see if he can follow up his solid effort in San Jose on Saturday to potentially earn more playing time.

I'm also keeping an eye on Paul Gaustad, but given the extreme nature of his situation (he takes a zillion defensive-zone faceoffs for every offensive-zone one), his negative Relative Corsi is excused somewhat.

The defense will be interesting to follow for the rest of this season. In the recent past, the combo of Shea Weber and Ryan Suter took on the toughs and also put in team-leading performances, but this year the burden will have to be spread out a bit more. It's a very glass half-full vs. half-empty situation. On the positive side, no single blueliner is standing out as an underperformer, but as a group, the Preds continue to get outshot on a regular basis, and over the long haul that doesn't bode well for team success.