This is not a happy week for goal analysis. Let's look at two goals from two shutouts, shall we?

Note: My apologies for not posting this a few days ago, I overlooked the fact that it was ready. Enjoy anyway! - Dirk 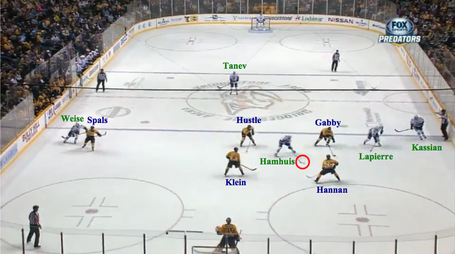 The Canucks are breaking into the zone, and the Preds' positioning could not look beautiful. They're perfectly set up. They’ve boxed Hamhuis in, which will force him to make a decision with the puck, Spals has the far-side winger covered, and Hustle and Gabby are ready to pick their covers once Hamhuis makes his move. 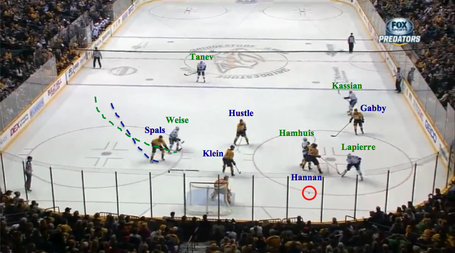 Hamhuis makes it about half way in from the blue line without making a move. Hannan decides that he’s had enough, so he steps up and forces one. Hamhuis dumps the puck in to Maxim Lapierre, who scoots down low to pick it up. Klein will go with him. This is where the first big issue shows takes place. 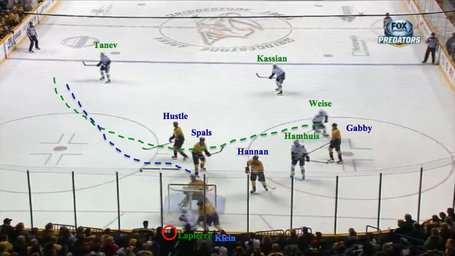 When Klein starts chasing Lapierre behind the net, he leaves the slot empty. Spaling is the center on this line, and as the center, his job is to help whoever needs help - whether it’s a winger engaged in a puck battle along the boards, or a defenseman who has been drawn into the corner. This is why playing center is so difficult, and why you often see younger guys like Colin Wilson and Craig Smith eased into the position; it’s an absolute ton of responsibility, and it requires a lot of attention, vision, communication, and speed (although speed is less of a requirement and more of a useful bonus-skill). So as the center, Spaling feels the need to cover for Klein in the slot. In doing so, however, he’s cutting ties with Weise, who will happily take advantage of not being covered. Spals is aware of this, as he’s looking right at Weise as he skates away. He's gonna do something about that, right?

Assumption 1: Spals is going to communicate with Gabby and let him know that Weise is alone. It’s the most logical move, as Gabby is right there and not really busy doing anything else.

Assumption 2: Hannan is going to take Klein's spot at the front of the net.

Assumption 3: Spaling will go do something else once Hannan shows up, like go find an uncovered guy (maybe the one he left earlier?) or go help Klein pressure Lapierre or something. 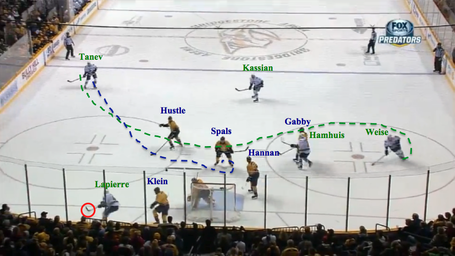 …aaaand this is why you don’t assume.

Assumption 1: Clearly didn’t happen, because Gabby ain’t covering the guy he would be covering if Spals had communicated with him about said guy, and Weise is circling the zone all by his lonesome. This makes me think that Spals assumed that (1) Gabby knew what was happening with Weise, and (2) that Gabby would take care of Weise.

Assumption 2: Hannan leaves Hamhuis, who is heading back to the blue line, and heads to the front of the net to cover for Klein. Hamhuis is certainly still a possible threat, however, and therefore I understand why Gabby decides to cover him; not only is he open, but he's also the guy Gabby would normally be in charge of covering anyway. The other reason Gabby goes after Hamhuis is that he doesn't know about Weise, who has snuck down behind him.

Assumption 3: Not really sure what Spals is doing yet... Hannan appears to be looking over at him, so you'd think Spals would notice that Hannan is back and know that that he's no longer needed in the slot. There's no one there to cover anyway. 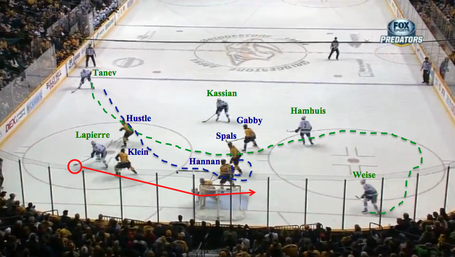 Lapierre goes for the third option: putting the puck on net. He and Klein are both righties, so when he turns sharply and faces Klein, their sticks are opposite each other. Klein isn't going to be able to poke the puck away from Lapierre very easily, and Lapierre can get a relatively uninterrupted shot at the net. Weise still doesn't know whether Lapierre is going to pass him the puck or take a shot. To cover both possibilities, he hovers between the boards and the goal, making sure he can easily get to either one as quickly as possible.

Meanwhile, Gabby, Spals, and Hannan are all sorta piled up in the slot. Hannan is in the slot and he's doing his job. Gabby sees Hamhuis heading up to the point and knows that Kassian, who was covering for Hamhuis, is coming into the zone, so he goes after him. Job well done. Spals, however... Spals is in trouble. There's pretty much no reason for him to still be there anymore. He's not helping anyone or anything. I don't know if he sees Gabby (who's slightly behind him at this point), but I assume he still thinks that Gabby is covering Weise? Who knows. Either way, Spals needs to be doing something that isn't standing around in the slot. He hasn't even looked to see what's going on in the zone beyond of Lapierre. He should probably do that. 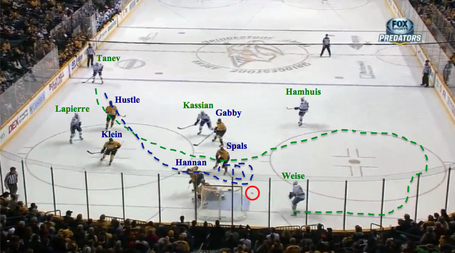 Back to Lapierre. He spins a 180 and flings the puck on net, and it deflects off of someone (can't tell if it's Hannan or Pekka). That deflection causes the puck to bounce across the unguarded crease.

Spals now realizes where Weise has been. 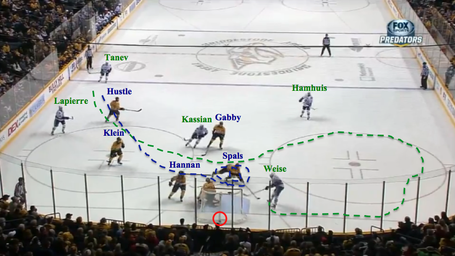 Here we have Weise scoring on a very open net. It's a relatively uncharacteristic mistake for Spals, but it's still a really bad mistake. How often do you see one guy floating around his offensive zone like that? It simply can't happen.

The video angle I chose for the pictures is the replay, not the initial shot, so hang tight until the second half of the highlight.

For those of you who want to see evidence of our big no-no defensive mistakes, here you go. You also get to see Spals playing center correctly, so this a nice little comparison to the first goal. 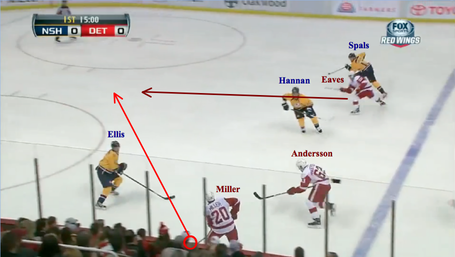 Detroit is breaking into the Preds' zone, and Drew Miller has the puck along the boards. Ryan Ellis is pretty effectively preventing him from taking a direct shot on goal, so Miller decides to flip the puck into the middle of the zone towards a speeding Patrick Eaves (and Nick Spaling) instead.

If you check out Scott Hannan's body positioning right now, you can see that it looks a little weird; he's facing the boards, not looking up ice like Ellis. Here's why: one second earlier, Spals was still hauling his butt out of the Wings' zone and Patrick Eaves was more alone, so Hannan skated backwards towards him to make sure he couldn't come into the zone uncontested. When Spals catches up to Eaves, Hannan transitions back to watching Miller and Andersson, which causes him to lose a stride on Eaves (which you'll see in the next picture). So that's why he's a bit behind in the next frame, and that's why it's okay that he's a bit behind. 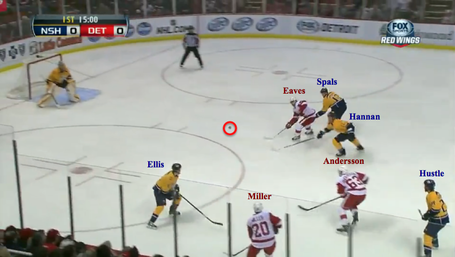 Spaling's job right now is to be absolutely sure that Patrick Eaves does not get full control of the puck and does not put it on net. You can't see it in a screen cap, but the puck takes a weird bounce pretty high up into the air. This luckily prevents Eaves from getting a clean shot, but he's still able to get the puck at the net. 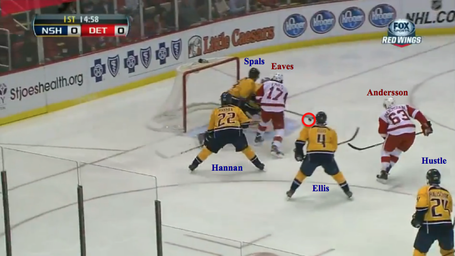 While Spals, Eaves, and Rinne smack the puck around a bit, and the puck pops out towards the corner. Andersson heads after the puck. Ellis sees that Andersson doesn't have a buddy, so he tags along. Unlike the Vancouver game, Spals is keeping tabs on his guy and is going to stick with him as long as he can. 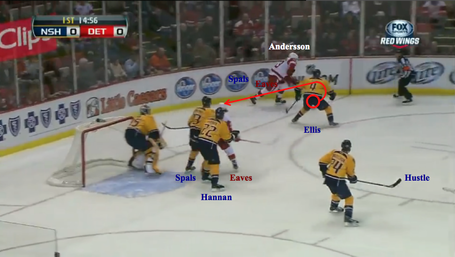 Andersson gets to the puck first, so Ellis positions his body to try to cut off any big passing lanes. My guess is that Andersson probably would have passed the puck up the boards here if the ref wasn't in the way, because Ellis wouldn't be able to get his stick across his body quickly enough to stop it. However, because the ref is in the way, Andersson reverses the puck for Eaves. 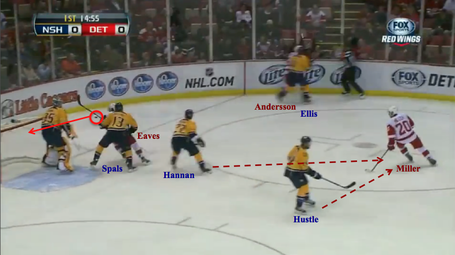 Ellis had stepped up on Andersson, so he finishes his check (good boy, HRS). Eaves and Spals head after the puck. Miller curls into the zone. A communication error takes place.

Hannan and Hustle are currently the only guys in this scene without someone to cover, so one of them needs to be on top of Miller. At this immediate moment in the screen shot, Miller is still up for grabs. That shouldn't be the case for very long, however, as either Hannan or Hustle needs to pick him up (hence the dashed arrows). 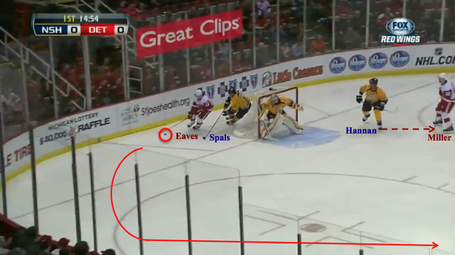 The tough part about screen capping highlights is that you can't always see everything that's happening. This is one of those moments. Eaves and Spaling are rounding the net, Hannan is heading across the crease to cut them off, Miller is just standing there, and I don't know where Hustle is. I know Hannan wants to make sure Eaves can't cut to the net, but as a defenseman, your biggest concern is typically watching for the pass to the guy in the slot. Miller is that guy. 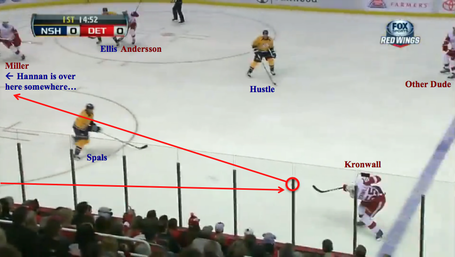 I cut a few seconds out because nothing exciting happens other than Eaves deciding to pass the puck up to his defenseman, Nick Kronwall. Spals leaves Eaves and hurries up to block as much of Kronwall's shot as possible. Hustle is playing the weak-side wing well. He will be able to pressure Other Dude if Kronwall passes him the puck, so Kronwall likely won't do that. Hustle is quite effectively limiting Kronwall's options. Remember how weak-side wing positioning came up with Sergei last time? Well, this is about where Sergei should have been standing.

Ellis has Andersson, and I assume Hannan has Miller? He should, because no one else is there. 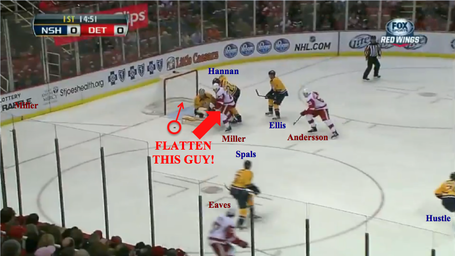 Rinne makes the initial save, and the puck is kicked out to the side. What happens next is something I've been frustrated with recently: Hannan doesn't topple Miller. Look, I know NHL dudes are big and solid, and I don't actually expect him to put him on his ass, but for God's sake, don't let the guy just stand there and whack the puck in the net! Plow into him. Knock him off balance. Get really low and explode up into his armpit/chest area. Don't let him just put the puck in like that. It's a weak goal, not because of what Miller did, but because it was so preventable.

Just flatten the guy. It's your crease/goal area, not his.