It has been an embarrassingly long time, but I'm back...

Geez... Time flies. I had no choice but to put this stuff on the back-burner for a while, but I'm finally back. I'm sorry it's been so long. Things have settled down, so I'll be writing much more consistently from now on.

Alrighty! Well, it's been long enough, so let's get to it. I only have two for tonight because of how old this is. 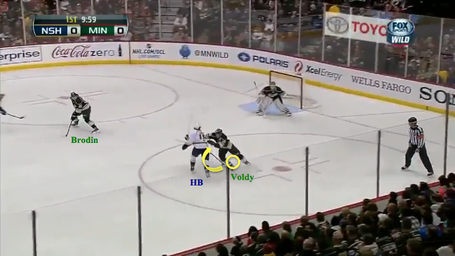 HB had a rough start to the season, but man has he gotten better, eh? I don't really remember how he was doing this game, but he is the entire reason this goal happened, so let's just pretend he was awesome. The best part about this goal is that it starts with HB deking the hell out of Voldemort. It's great. He pokes it through his skates and ducks around him. Voldy gets a little bit of body on him, which causes him to misfire the puck, but he don't give a damn... he tries anyway! 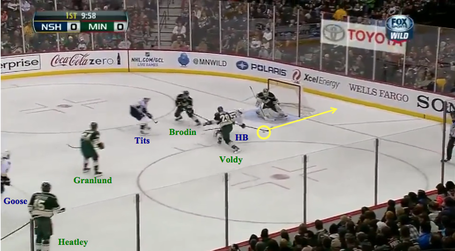 Voldy nudges HB's hip, causing him to miss the puck, which slides into the corner. HB loses an edge and is going to spin across the crease to left of the net. Sergei sees him wipe out and races after the puck. At this point, Brodin and Voldy swap charges (Brodin gets HB; Voldy gets Sergei). 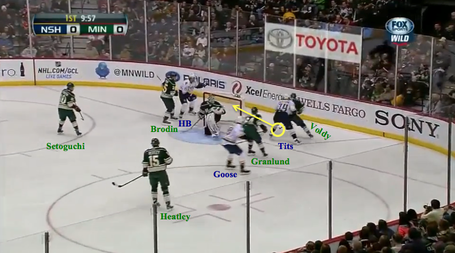 I watched this about 50 times and I'm still not sure who gets the puck down the boards. I think it must be Suter, but I never saw him take a whack at it, so who knows. Either way, the puck gets over to HB, who has picked himself up and repositioned himself as a passing outlet for Sergei. Mikael Granlund is in charge of Goose, who is the third man in. He's keeping an eye on the right boards at the moment just in case the puck comes out that way. (You can see this in the directionality of his skates, which are pointed right.) 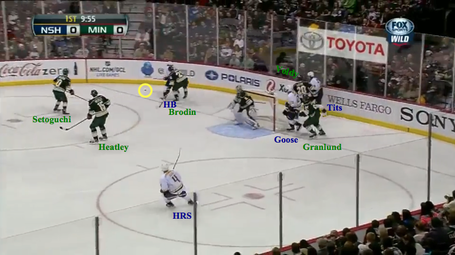 Here's where rookie Jonas Brodin ruins it all for Minnesota: he does a terrible job of containing and controlling HB. Let's look at Brodin's body position for a second. He's a lefty. That means that when he only has one hand on his stick, it's his right hand. HB knows this and takes advantage of this. Let's see what he does: 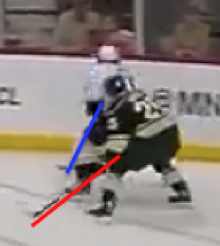 Brodin: "STICK TO THE LEFT!" 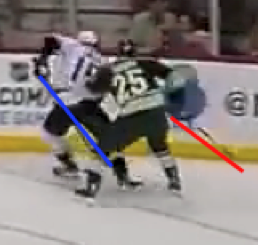 Brodin: "CRAP, STICK TO THE RIGHT!" 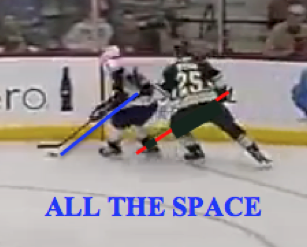 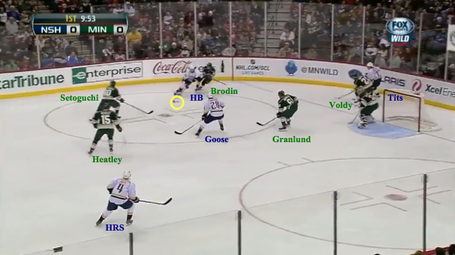 Look at that. That little deke was brilliant. It not only got Brodin to move his stick away from HB's forehand, but it also got him drop to one hand, which is weaker in terms of puck control on the odd chance that he did get the puck. This little deke gives HB all the room in the world. There is seriously no one there. On top of that, Brodin now has to lift his stick up and over HB before he can start to defend again (which he does by taking a two-handed whack at HB's stick). HB basically just ignores him and skates on in uncontested. Setoguchi kinda makes a half-assed attempt to poke the puck away, but HB's on a roll. Ain't no one screws with Honey Badger. Ain't no one. 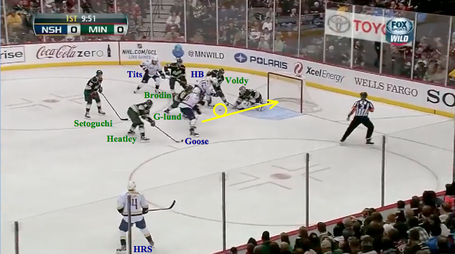 HB beelines towards the net, rips a shot, and tries to get his own rebound but misses. The puck ends up on Goose's stick, and he puts it in the back of the net. Now, a quick note about Granlund, who was supposed to be covering Goose: his positioning up until this final picture isn't bad until HB crashes the net, at which point he understandably panics and leaves Goose to go help Voldy cover HB. I feel for Granlund here, because he's kinda screwed no matter what he does. Here are Granlund's options:

(1) He leaves HB for Voldy to deal with, allowing him to take a completely open shot on goal, and covers Goose, preventing him from putting any possible rebounds in the net.

(2) He goes to help Voldy cover HB, hopefully preventing him from taking a completely open shot on goal, but this also leaves Goose free to put any possible rebounds in the net.

Tough, right? I mean what do you do?? I don't blame him for trying to contain HB, because he was the immediate threat; it's what I would have done (because my playing choices are almost definitely up to NHL standards). Really though, this goal comes down to HB stealing Brodin's jock and flinging it up in the stands, because in that moment, Granlund was suddenly forced in making a crappy decision.

Well, I wish I didn't remember the one period I saw of this game. There's a little bit of lead up to the first picture, but it's unimportant so we'll just jump in right here. 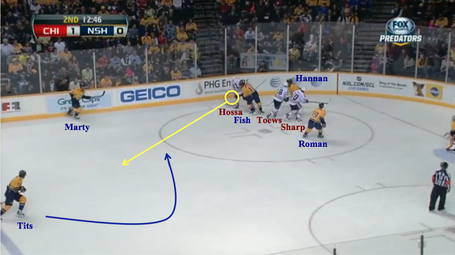 Fish is trying to get the puck out of their zone, but unfortunately he's fighting Marian Hossa. So yeah. That doesn't go well. That's not good on Fish's part. Hossa ends up with the puck, and he'll fling it back to Duncan Keith (who will show up in a minute). In the mean time, Sergei is curling into the zone and doing two things: (1) He's opening himself up to a possible breakout pass from Fish, and (2) he's playing the weak-side wing.

If you don't know what the weak-side wing is, here's an explanation: When the puck goes to one side of a team's defensive zone (say, against the left boards or into the left corner), the defensive winger on that side goes after it, and his center often goes with him for puck support. (It's easier to win the puck when you have more than one guy fighting for it.) This leaves two thirds of the defensive zone wide open. The remaining winger plants himself in the middle of the zone, right between the top of the circles. His job is to help defend multiple areas of the ice; he needs to eliminate the passing lanes up to the defensemen, and he needs to be able to jump into the play down low, if necessary.

Sergei is in the middle of swinging down into position right now, which is good. 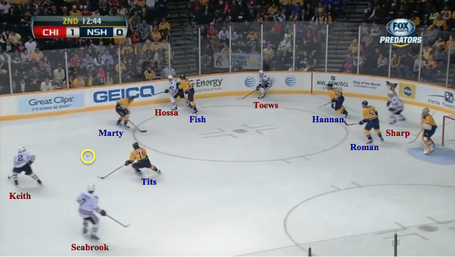 There he is. His positioning isn't great. Ideally, he shouldn't be this nearly this high. When you're this high and the other two forwards are battling for the puck, it leaves a lot of open room in the slot. Like a LOT. That means that if you, as the weak-side wing, get caught, there ain't much standing between the opposing player and the goalie. 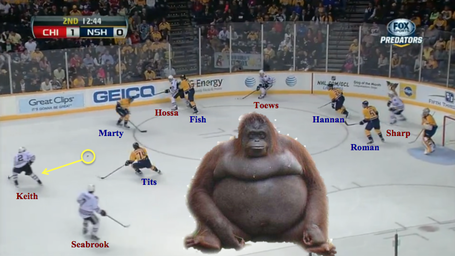 Here's a really fat monkey to demonstrate how much space Sergei has left open by staying up so high. That is an insane amount of empty space. VERY rarely should there ever be that much space in the defensive zone - especially right in front of the net.

So Sergei is sorta in position. He sees the pass going to Keith, and he tries to cut it off. Marty tries to do the same, but it gets through. Once Keith gets the puck, Sergei decides to challenge him. Now this wouldn't be a problem if he wasn't so high up in the zone, but because he is, guess what happens... 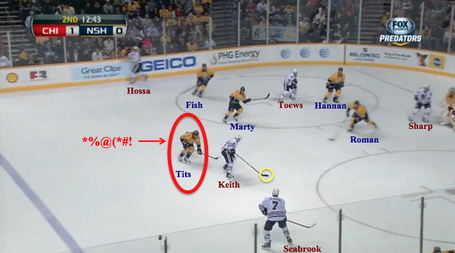 Keith walks right around Sergei. The ONLY good thing about this is that Keith has to go to his backhand to get around him, so Keith doesn't have a strong shot.

Roman Josi is now in the same situation as Granlund. Does he stay with his man (Sharp) and let Keith walk in and take an uncontested shot, or does he leave his man and challenge Keith? Like Granlund, he chooses to step up and deal with the puck carrier. This is good, in my book. 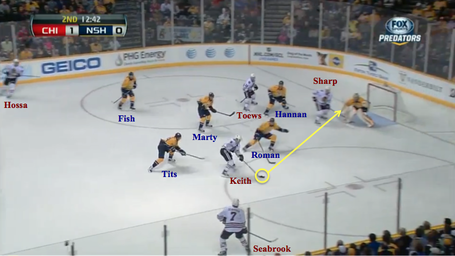 Josi's positioning forces Keith to stay on, and fire the puck from, his backhand... Sharp, who Josi had to abandon, is just chilling in front of the net waiting for the puck. (Like Granlund, this was really a no-win situation for Josi.) Hannan is on his way to cover Sharp, but that means that Toews, Hannan's guy, won't be covered.

Keith gets the backhand shot off, and Pekka gets his blocker/shoulder on it. The puck bounces up and slightly behind him, and the uncovered Toews tips it in.

The highlight for this goal isn't working, but here are the game highlights. If you skip to 1:37, you can watch this all go down.