Modern sports arenas aren't simply hallowed halls immune to change. Venues like Bridgestone Arena work best when updated to meet the changing environment in which they operate, and this summer's modifications are the next step in a long process.

Share All sharing options for: Bridgestone Arena Renovation Just the Latest Step in the Building's Evolution

Right around the time the puck drops on next season, Bridgestone Arena should have a whole new look on the south side of the building, as the Metro Sports Authority yesterday approved the Predators' plans to remodel the "back door" to fit in better with the new Music City Center right across Demonbreun. Nashville's tallest bowtie-wearing reporter shares the details:

Specifically, the arena's south entrance will be significantly modified, creating open space at the corner of Fifth Avenue South and Demonbreun. Two video boards - the one facing Demonbreun will be a prominent 16-by-20-feet - will be installed on the "barrel," the rehearsal hall at the southeast corner of the building. That barrel will also include LED lighting and graphics boards running 130 feet along the building's wall facing Fifth.

A pro shop will be accessible from the street (unlike the current main pro shop inside the building) and adjacent to a street-level pub along the plaza, straddling the existing parking garage.

A second restaurant on the Fifth Avenue side will connect that street with the arena's concourse.

Guiding the continuing evolution of Bridgestone Arena is one of the things that the Predators organization consistently does right. While some cities allow their arenas to remain static, waiting for the day when a team owner can squeeze them to build a replacement, the Preds are treating the building like the economic engine that it is, and are enhancing it over time for optimum performance. Consider a few examples:

So besides Filip Forsberg and this summer's high 1st-round draft pick, it looks like we'll have another shiny new toy to check out in the fall...

Here's another look at things from the view across Demonbreun at the Music City Center: 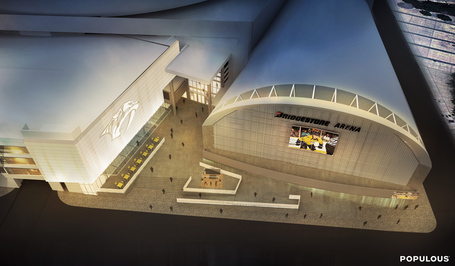 Photos courtesy of the Nashville Predators.