Heralded as a competitive two-way forward, Nick Spaling scored goals at a faster pace than ever this season, but the Goals Against piled up, too.

"Spals to the Wall" is a familiar rallying call seen on Twitter when Nick Spaling scores - as Puckscene.com famously notes, when Spaling pots a goal, particularly on home ice, the Predators usually win. A celebrated role player who made more than a few fans with his run during the 2011 playoffs, Spals' next challenge is to prove he can contribute more than the occasional highlight, and help the team succeed night in, night out.

Spaling's situation is a fairly complicated one - the flow of play, both in terms of raw Corsi and his value relative to the rest of the team, was awful during his 5-on-5 ice time. Despite some fortuitous goal-scoring, Spaling doesn't generate much offensively, so unless he's locking down opponents to a similar level (hint: he's not) the Preds come out on the losing end when he's on the ice.

Ignore the cheery green cells in the power play section, because at 14 seconds per game Spals got an insignificant amount of PP work. On the bright side, however, his penalty killing was pretty good. Spaling seems to make a solid option alongside Paul Gaustad there.

With Gaustad playing the role of primary penalty killer and checking center, Spaling's upside in Nashville is rather limited. What does separate him from his fellow role players is the ability to line up at any forward spot, which comes in handy when injury strikes and holes need to be filled in the lineup.

As a restricted free agent who made $1.1 million last season, the Predators have a tough decision to make here. To keep his rights, the Preds will have to issue a Qualifying Offer which at least matches that $1.1 million figure - do they want to pay that much for a player who fills that kind of role? I'd bet that they will, but will need a better all-around game from Spaling next season if they're going to rebound.

(in cheesiest radio voice) Spals, along with Matt Halischuk, really put the "high" in "highlight" with this trip to the top of the CN Tower last September about a week before training camps were supposed to open: 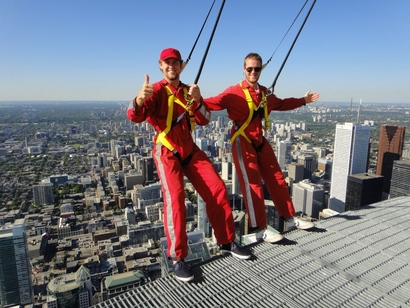