2013 NHL Draft: What if Seth Jones is Available When the Nashville Predators Pick?

Taking a potential elite defenseman with local ties is just too obvious a decision for the Colorado Avalanche to make, apparently, so they're throwing a monkey wrench into NHL Draft speculation.

Share All sharing options for: 2013 NHL Draft: What if Seth Jones is Available When the Nashville Predators Pick?

The Colorado Avalanche have given us some NHL Draft intrigue with Joe Sakic's declaration that should the Avs pick #1 overall later this month, they won't take defensemen Seth Jones:

After a week of internal meetings, Avalanche brass came to a conclusion: Jones won't be their pick. Instead, it could be any one of three forwards: Nathan MacKinnon, Jonathan Drouin or Alexander Barkov.

"If we do pick first, we're leaning more toward one of those three forwards," Avalanche executive vice president of hockey operations Joe Sakic told The Denver Post. 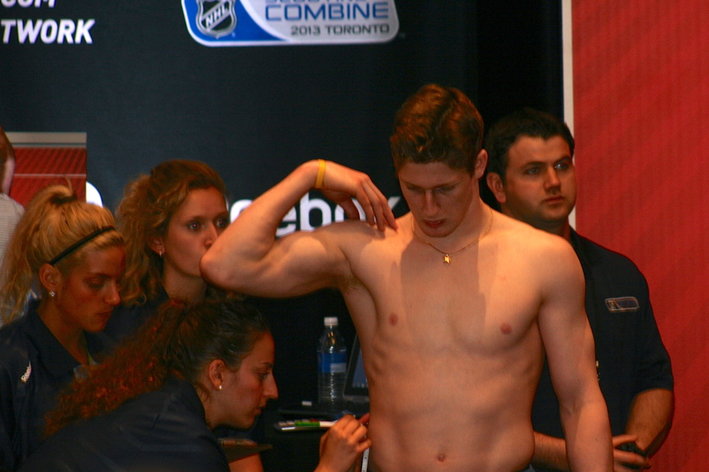 In our Mock Draft, Colorado kicked things off by picking Nathan McKinnon. See how the rest of the board is filling out!

This is more than a bit of a head-scratcher, considering Colorado's relative bounty of talent up front, and paucity on defense. What it does do, however, is potentially make one less high-end forward available when Nashville gets called to the podium for the 4th-overall selection.

While locally we have been preoccupied with the potential for Nashville to land a star-quality center with the #4 pick (I went with Aleksander Barkov in the SB Nation Mock NHL Draft), the team's draft history brings up an obvious, but uncomfortable question:

@ThePredatorial @Forechecker IF Jones were to be available at 4, what do you think the Preds do?

We all know how much David Poile & crew love to draft and develop defensemen. Might they indeed go in that direction this time around?

To D Or Not To D, That Is the Question

Here's the weird thing, though - for the first time in recent memory, the Predators actually have greater prospect depth at forward than they do on defense. When you look at guys who haven't earned steady NHL work yet, pretty much the only defenseman who is on track for the big leagues is Mattias Ekholm, the rangy left-hander who just completed his first full North American season in Milwaukee.

Up front, however, there is much to be encouraged about between draftees like Jimmy Vesey, who had a strong year with Harvard and Team USA, and Brendan Leipsic, the Portland Winterhawk who led all of junior hockey in scoring. Zach Budish has continued his development at the University of Minnesota, and Zach Stepan finished 3rd in the USHL scoring race. Austin Watson and Taylor Beck may be ready to take the step into full-time NHL duty as early as this fall, too.

So perhaps the blueline is where David Poile should focus his attention already? Let's walk through the possibilities...

The right side of the defense is probably the Predators' most well-stocked position at the NHL level, but the argument could be made that the organization needs to address that area for the long-term. Unless there is a plan in place to move one of Shea Weber, Kevin Klein or Ryan Ellis out of the way, however, I wouldn't use a 4th-overall pick on an area which isn't such a high priority. The exception there might be if one evaluated Seth Jones as being head-and-shoulders ahead of the other players available to draft at that point, which probably isn't the case.

You have to admit, however, the amount of forehead slapping that would be induced by the Preds taking a defenseman with the #4 pick would be awe-inspiring.

While the trio of Nathan McKinnon, Jonathan Drouin and Aleksander Barkov are terrific prospects, if they are taken off the board with the first three picks there are a couple other forwards who the Predators might select. Valeri Nichushkin and Elias Lindholm are both exciting talents who could add an entirely new dimension to Nashville's forward lines.

Personally, this would be my preferred choice. Nashville needs a #1-caliber center, and the prospects already rising up through the system mostly play on the wing. As a fan I would be pretty thrilled to see any of the five guys noted in the previous paragraph drafted by the Preds.

If another team really wants Jones, perhaps the savvy move is to work out a deal and move down in the draft. Calgary was reported to have offered three 1st-round picks in exchange for the #1 overall, so might something similar allow the Predators to still get a player they like, along with something else of value?

What do you think? If indeed Seth Jones drops to the #4 spot, should the Predators take him?