Share All sharing options for: Jonathon Blum Season Review: Blummer at the Crossroads

Nashville's 1st-round draft pick from 2007 (23rd overall) approaches a career crossroads after a decidedly middling campaign. Did he do enough to earn a new contract from the Predators?

1st Half Grade: B

The unfortunate thing with Blum is how expectations were unfairly raised by his NHL debut in the spring of 2011. He looked spectacular during the stretch run that season, but most of that perception can be tied to a ridiculously fortunate run of puck luck. His PDO of 1068 came about due to unsustainably hot shooting (13.9%) by the Preds during his ice time, while his underlying possession metrics flashed major warning signs. Sure enough, when his PDO fell back to earth in 2011-2012, and Blum's Corsi-related metrics stayed the same, the guy turned from stud to dud in a hurry.

This season, his possession numbers actually improved pretty significantly, basically falling in line with the team average. Of course, given the team's poor performance in that regard, that's faint praise. He also failed to generate any points during his time on the power play (a major disappointment), and didn't play a significant role on the penalty kill. 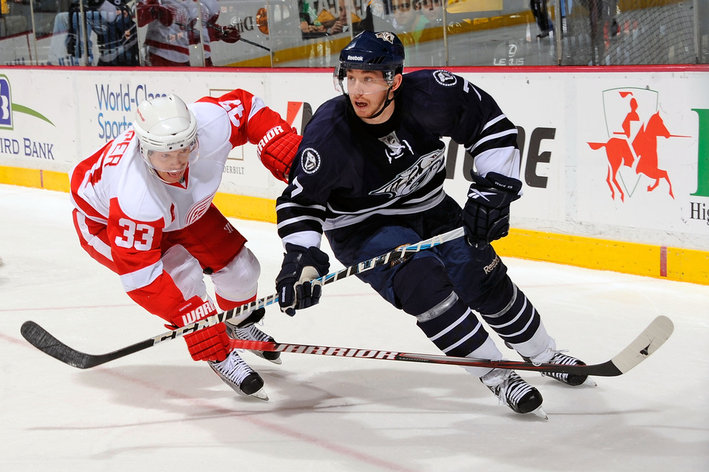 Chris Rydburg portrayed Blum in his season preview of traveling a "road to redemption". Did Blum go far enough along that journey?

Blum stands at an important juncture in his career - for the Predators to retain their rights to him as a Restricted Free Agent, they need to extend a Qualifying Offer (basically, a contract offer for at least a small raise over his $650,000 salary from last season). With Victor Bartley just signed to a 3-year contract, Blum may become a victim of the numbers game and find himself on the way out of Nashville. With Josi/Bartley/Gill on the left side, and Weber/Klein/Ellis on the right, there is perhaps a 7th spot available but that could get split up by the likes of Mattias Ekholm, T.J. Brennan (who was just acquired via trade from Florida, but is like Blum also headed to RFA status), or even another D-man from Milwaukee such as Joonas Jarvinen or Joe Piskula.

While Blum may not be demonstrating top-four potential these days, he could still provide value somewhere as a puck-moving 3rd-pair type of guy. It doesn't appear that there's room for that on Nashville's depth chart, however, so I wouldn't surprised to see him traded (much like Bobby Butler was recently) or the Preds decline to make him a Qualifying Offer, which would turn him into an unrestricted free agent on July 5.

During that wacky Presidents Day game at Colorado, Blum scored a goal late in the second period that brought the Predators back within two goals, giving them a chance to come back: