Nashville Predators Analysis: What's Luck Got To Do With It?

Share All sharing options for: Nashville Predators Analysis: What's Luck Got To Do With It?

Any number of various factors have been cited for the Nashville Predators' 27th-ranked finish in the NHL last season: injuries, after-effects from the lockout, poor puck luck, you name it. Today, Rob Vollman of Hockey Prospectus published an analysis trying to link together a few different factors of hockey which are, to various degrees, "luck-driven".

Caution: when hockey stats guys talk about "luck", it's usually meant to include a number of factors which vary in a random fashion over the course of time, as opposed to more durable indicators of team talent such as puck possession (Corsi, Fenwick, etc.).

These "luck" factors include CHIP (a measure of the significance of man-games lost to injury), PDO (the sum of shooting & save percentage at even strength), performance in one-goal games, etc., all indicators which tend to vary unpredictably from one season to the next.

So how did the Preds fare in 2013? (click the picture to make larger) 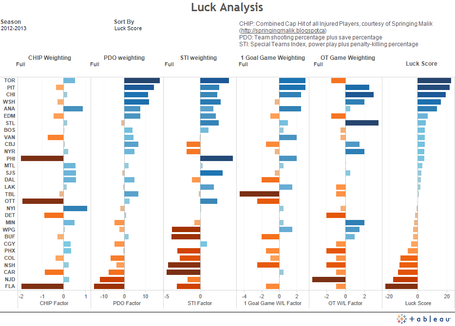 Interestingly, the Predators finished with the 4th-worst luck in the league, lending some credence to the "aw shucks" theory, although Vollman leaves the weighting of this analysis wide open. Did luck cost the Predators 1 win last season, or 10? That critical question is left unanswered.

Before you interpret this analysis as foretelling a quick rebound to the kind of success Nashville enjoyed in the 2011-2012 season, click Vollman's graph over to the previous year and check it out. Due to technical issues I couldn't include the picture here, but instead of the 27th-best "luck" in the league, the Predators were #1 overall.

So... maybe the 2013 Preds weren't as bad as the standings indicated (I think we can agree on that given the number of Milwaukee Admirals who were called up in the final weeks). But that 2011-2012 did indeed have some underlying issues as well, so the core of this team probably ranks right there in the NHL's mushy middle, rather than at either extreme.

What does this portend for the upcoming campaign?

Well, it's never to early to start making offerings to the Hockey Gods...