When I learned the Preds were hosting their first Hockey and Heels event, I was ecstatic. Between this and the team's first craft beer festival last week, it is obvious the organization is making an effort to keep hockey-less August somewhat bearable.

Hockey and Heels on Thursday was a woman's selfie-taking paradise. From on-ice shooting demonstrations to a tour through Bridgestone Arena's locker/training room catacombs, the event encouraged fellow fans to take pictures "riding" a Zamboni or longingly leaning against pictures of their favorite player.

My favorite part of the night was when reporter Dawn Davenport from WKRN News 2 opened up about women in sports journalism. Her optimism about locker room reporting in Nashville conveniently followed the heels (heh) of ESPN's "Let Them Wear Towels," a documentary about female sports journalists' struggles in the 70s.

"Do not look down," Davenport quipped about Titans locker room interviews.

Her favorite Pred to interview? Pekka Rinne, she said, and a wave of woos echoed through the arena.

"He can have a terrible game and be so frustrated," Davenport said. "And he can sit there for 20 minutes and answer every single question there is."

Speaking of women in sports, were any of the Preds dancers/ice girls in attendance? Please excuse my ignorance if any of those ladies were there. I would have loved for them to talk about their game day routines or how they handle catcalls and come-ons during games. I've witnessed it happen, and it's admirable how they can gracefully handle rude people without using pepper spray.

There are some growing pains that can be easily fixed if this event is (hopefully) held next year. For instance, some of the tour groups were larger than others, making activities such as the on-ice shooting demonstrations seem rushed. Also, cramming dozens of ladies in the arena's cozy 501 Club for hors d'oeuvres left some awkwardly eating hummus in the corner while others jockeyed for precious bar space.

Organizers could also consider what the Sabres or Blue Jackets did for their Hockey and Heels events. The Sabres offered different package deals, and the Blue Jackets doled out commemorative wine glasses. As a bonus, this year's attendees would be enticed to come back for a second year knowing the activities wouldn't necessarily be the same. But based on what I witnessed last night, Hockey and Heels in Nashville has the potential to become a well-attended annual event.

In the meantime, I'm satisfied with this year's "free" T-shirt: 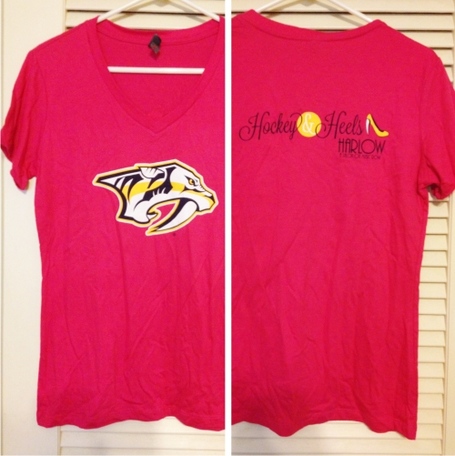 Ladies: Did you enjoy this year's Hockey and Heels event?