There are some very bright people working at Google. Sometimes, however, they're a little too clever for their own good...

Those wacky algorithm-crunchers at Google have done it again, portraying another Nashville Predator with an inappropriate picture on their search results pages. As shared by @rfan_3 on Twitter, Google has come up with another interesting choice for a hockey player, with Jay-Z substituted for Nashville Predators 1st-round draft choice Seth Jones: 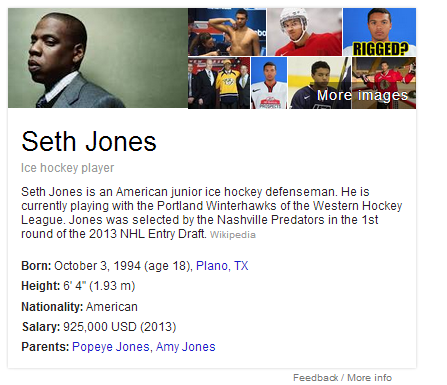 At least Google has some reason for mixing up the two, as there was quite a bit of buzz a few months ago about Jay-Z's Roc Nation Sports wanting to represent Jones as his agent for non-hockey activities. Thus, stories on the web involving Jones that garnered a great deal of attention were likely to feature a picture of Jay-Z:

The next target for Jay-Z's Roc Nation Sports banner is potential No. 1 NHL draft pick Seth Jones, according to sources. The son of Nets assistant coach and former Nuggets player Popeye Jones is already repped by CAA, Roc Nation's partner. But sources said Jay-Z's organization wants to strike a deal to be involved in the star's marketing and branding, reports The Post's Kirsten Fleming. Jones would then benefit from both sides of the CAA and Roc Nation partnership. "When Seth comes to the NHL draft [in Newark, NJ] in June, his family, agents at CAA and Roc Nation are going to have a powwow to see if he'll sign with them," a source said.

On the bright side, Jones got a much hipper replacement than former Pred Martin Erat: