How the Nashville Predators Landed Seth Jones: Fox Sports Debuts "Driven: The South is on the Clock"

Share All sharing options for: How the Nashville Predators Landed Seth Jones: Fox Sports Debuts "Driven: The South is on the Clock"

If you wanted to get a glimpse into the process which led to Seth Jones becoming a Nashville Predator, Fox Sports South is airing "DRIVEN: 2013 NHL Draft, The South is on the Clock" this month, a welcome bit of hockey viewing for fans trying to make it through the dog days of summer.

A producer at Fox Sports was good enough to send me a DVD of the program, which provides a look "behind the scenes" as the Nashville Predators, Carolina Hurricanes, Florida Panthers and Tampa Bay Lightning all prepared for the 2nd-5th picks in the 2013 NHL Draft.

Looking at this process through the rear-view mirror, knowing that Seth Jones fell to the Predators at #4, you can't help but get excited when you hear the top scouts from each of these southern teams rave about Jones as being not only an elite defenseman, but the type of individual whose maturity should help him make the transition into professional hockey.

How Does Seth Jones Impact the Preds' Depth Chart? 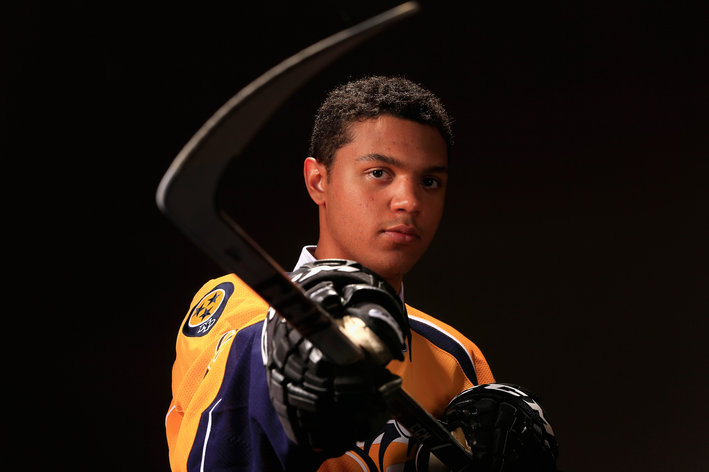 Bringing in a highly coveted defenseman like Seth Jones could lead to a major shuffle on the Nashville blueline.

Of particular interest are the scenes in which we see the Predators staff knock heads together over draft strategy. Chief Amateur Scout Jeff Kealty calls out names to be put on the board to start the conversation - "Jones, MacKinnon, Drouin, Barkov". Was that their internal team ranking to start with? It seems reasonable enough, and later on he emphatically stresses that Jones is the top overall player. General Manager David Poile speaks to the necessity of walking through various scenarios, just in case the opportunity comes along to move up into a higher draft position, or perhaps move back a spot.

When we get to draft time, the excitement builds not only for the players, but for the general managers. David Poile and Steve Yzerman keep an eye on the Colorado Avalanche, while Carolina GM Jimmy Rutherford talks about potentially moving back to #7, or up to #3 for Tampa's pick.

As it turns out, of course, Jones lands in the Predators' lap, and Poile's enthusiasm is palpable as he makes the announcement. Analyst Pierre McGuirre raves about the absolute steal that Nashville is getting away with, and there are beaming smiles and back slaps all around, not the least of which comes from Seth's father Popeye Jones, who proudly notes that he's a Tennessee product himself, and is happy to see his son heading to Nashville.

All in all, this makes for a nice glimpse into how individual teams not only prepare for the draft, but how their interaction can shape events on what is one of the most exciting days on the NHL calendar. If anything, it serves as a teaser for the type of programming that fans would eagerly soak up, much like Edmonton's "Oil Change" series.

If you weren't able to catch the show when it premiered a few days ago (an Atlanta Braves post-game show ran late, pushing it later than expected), it will air again Friday, August 9 at 9:30 p.m. Central on Fox Sports South.