Any team seeking to bounce back from missing the playoffs with so much youth in the lineup will have a number of questions to answer, but here are three major ones which Nashville Predators fans will follow this season.

1. Does Seth Jones make an immediate impact at the NHL level?

It looks like that's going to be the case, based on the results we've seen during pre-season and the amount of ice time Jones is receiving from the coaching staff. This is pretty much unheard of in Nashville, where the last guy to make the leap from junior hockey to the NHL was Scott Hartnell in 2000. Defensemen in particular are usually brought along very slowly by the Predators, but an agreement between the NHL and Canadian junior hockey prevents Nashville from sending Jones to their AHL affiliate (the Milwaukee Admirals), so it's either the big leagues or back to junior for Jones, and he really doesn't have anything left to prove at that level. 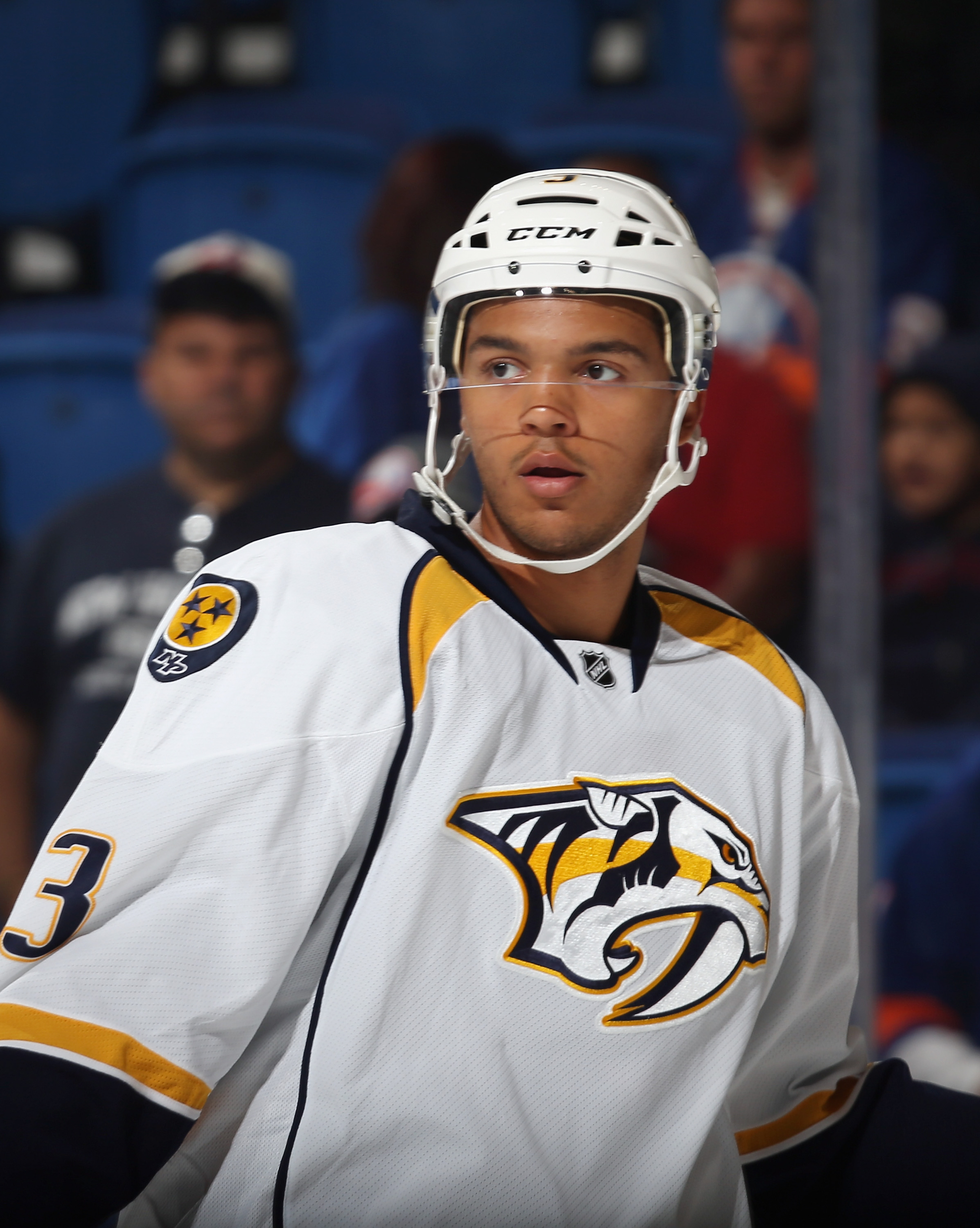 Tim Sullivan's longform feature for SB Nation is the definitive profile of the player who may become hockey's first African-American superstar.

Recently I reviewed the performance of teenaged defensemen playing in the NHL, and while there are a couple examples of rookies who lit up the league in their first year (recall the sensational debut of Tyler Myers), it looks like Jones will make a significant, but more modest contribution to the 2013-14 Predators team. While many highly-drafted prospects step into a lineup desperate for help, Nashville has a bounty of talented defensemen at various stages of their careers, so Jones doesn't have to be pushed into a leading role right away.

At the top of the depth chart you have Shea Weber (a perennial Norris Trophy contender) alongside Roman Josi, whose reputation around the NHL is due to grow as he enters the first season of a 7-year, $28 million contract. Behind them you have the reliable if unsensational Kevin Klein, who plays shutdown defense and is the team's primary penalty killer. Jones will fit in somewhere after those three, along with journeyman Victor Bartley and fellow high-end prospects Ryan Ellis and Mattias Ekholm.

2. Who provides the offense?

What? I thought you were supposed to bring it! Now what are we gonna do?

Shea Weber's slap shot remains among the most lethal in the game, and will be the featured weapon on Nashville's power play.

Seriously, this is a major concern, as the depth chart at forward isn't significantly improved from last season's. Martin Erat was traded away at the deadline last spring, to replaced on the top line by Viktor Stalberg (once he recovers from a shoulder injury, at least), which is basically a wash. Matt Cullen was brought in to bolster the center position, but at age 36, having never accumulated 50 points in a single season, any upgrade there is marginal. While the Predators can hope that they'll get a bit more production out of their 3rd and 4th lines in the upcoming season, the top two are mediocre at best, especially when compared with division rivals like Chicago or St. Louis.

While there is no single goal-scoring standout expected to lead Nashville's attack, many fans expect Colin Wilson to fill that role. The 2008 1st-round draft pick (7th overall) has taken a long time to earn the trust of the Predators' coaching staff, but he was the team's most consistently dangerous forward until a shoulder injury ended his season prematurely in March. He appears to be fully recovered from stabilization surgery on both of his shoulders last spring, but it remains to be seen if he can deliver a dominant performance over a full 82-game season.

Where Nashville will enjoy a competitive benefit is on the blueline, where they will feature the most offensively-talented group of defensemen in the division, if not the entire NHL. While their relative inexperience opens up questions about how they'll perform in their own end of the ice, younger defensemen like Roman Josi, Ryan Ellis and Mattias Ekholm can all get the rush moving and jump into the play as needed. Shea Weber's slap shot remains among the most lethal in the game, and will be the featured weapon on Nashville's power play.

3. With Pekka Rinne's health in question, will the Preds do anything to shore up the backup position?

The plan from the summer is for Carter Hutton to hold down the backup spot, but after underwhelming pre-season results many fans are wondering whether he's really up for the job. Having posted only middling numbers at the AHL level over the last few seasons, and with just one game of NHL experience, Predators fans have nothing to go on with Hutton but faith that David Poile has found a diamond in the rough, and that goaltending coach Mitch Korn can work wonders once again, as he did to coax career-best seasons from Dan Ellis and Chris Mason in the past.

If Hutton stumbles, other options within the organization would include 2011 2nd-round pick Magnus Hellberg, who is slated for the lead goaltending role in Milwaukee, and Marek Mazanec, the 6th-round draft pick from 2012 who enjoyed an extended stay at Training Camp. Of course, neither of those goalies have any NHL experience, so if the Preds decide a veteran might serve better they'll have to go shopping for one. A recent report out of Montreal indicated that Nashville had interest in former league MVP Jose Theodore, but the team has strongly denied anything of the kind, and it looks like old Jose "Three or Four" is heading to the KHL, anyway.