The benchmark player, the franchise's first draft pick and one of a select few to be with the Predators organization since their inception, David Legwand holds all the records and the highest esteem from Nashville fans. Can a team truly move on while holding on to a key member of the past? Is it time for the Nashville Predators to overhaul the face of the franchise and move the "Original Predator?"

Share All sharing options for: Should the Nashville Predators Trade David Legwand?

Today we debut a new writer on the OTF staff, Jeremy Sargent (formerly of the Predatorial), who will zero in on some of the burning questions surrounding the Nashville Predators and the NHL at large. Give him a warm welcome, folks! - Dirk

The name conjures images of a lanky kid from Detroit taken 2nd overall by the Predators in the draft of 1998. A defensive/offensive centerman, David Legwand marked what would be the definition of "Predators hockey" before such a phrase was coined. Legwand has been a staple of consistency that saw some of his best years with the likes of Paul Kariya and Martin Erat. While holding just about every career offensive record for the Predators, he has played the hard minutes on the top two lines while his skating, scoffed by some at being too slow (an optical illusion), allows him to glide easily to defend the opposition and show up in the slot awaiting a feed from the wing for multiple scoring chances.

His play in the post-season has been above-average and of course his penchant for scoring epic empty-net goals is legendary:

But with the glut of forwards, specifically centers, in the lineup and the potential for Filip Forsberg to make the opening night roster, is it time for the Predators and more importantly David Poile to entertain the idea of trading David Legwand. Keep in mind that David Legwand would have to waive his NTC in order for any of these scenarios to come to pass, but as we just saw with Martin Erat a few months ago, if it was to an established team with close proximity to a Cup run, he might not be able to resist and the Predators could in turn benefit from the added cap space and picks/prospects in return.

Martin Erat Traded: Sobering Up After the Marty Party 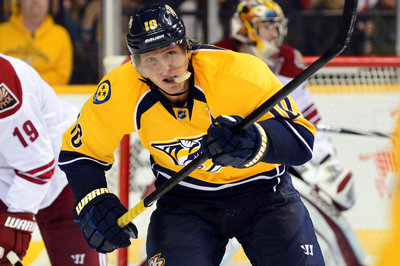 Normally we wouldn't speculate about trading longtime team members with no-trade clauses, but all that changed five months ago with the Martin Erat/Filip Forsberg deal.

Having Mike Fisher and Matt Cullen in the lineup could push Legwand to 3rd line duties. While the acquisition of new talent in Cullen does spread out the effectiveness of the centerman in a trickle-down effect, will Legwand be content with 3rd line minutes after playing on the top two lines for so many years? This is also the last year of his contract which has a salary cap hit of $4.5M. The Predators are less likely to offer him this same kind of contract, especially since his last offer was in a year where the Predators gave outlandish contracts for the sake of hitting the salary cap floor (see: Martin Erat).

Rather than letting Legwand go for nothing and staging another Suter debacle, now would be the best time to trade Legwand and acquire some sort of picks/prospects/player and one of the most intriguing dance partners is the former division rival and most hated team of all Predators fans...the Detroit Red Wings.

After a conversation via email with Graham Hathway of Winging It In Motown, our SBNation Detroit Red Wngs affiliate, both Graham and I have varied views on the future of David Legwand but similar methods of how the trade might go down.

Before you start sharpening your pitchforks, let's look at the details:

The Red Wings would have to shed some cap space to take on Legwand's contract, but could make a move at the trade deadline to get him in the system.

...you never know what could happen, but if this were a move that did come to fruition, I would envision it happening at the trade deadline, not before the season started. -Graham Hathway

This is exactly where Graham and I agree since the Red Wings closeness to the salary cap ceiling makes a move in August/September less likely, a trade at the deadline could move Legwand to the Red Wings if the price is right.

Another possibility would be the shedding of roster positions and cap space by trading two players that the Red Wings would be willing to part ways. Jordin Tootoo, who played the majority of the year for the Red Wings but was once again snubbed from playing much in the post-season could be sent Nashville's way.

Jonathan Ericsson, who is getting paid top dollar ($3.25M) for less-than-stellar production and is in the last year of his contract, could be packaged with Tootoo to get David Legwand and Poile to bite on a trade. In drafting Seth Jones, Nashville needs another left-handed defenseman with some veteran experience to aid in Jones' development. Ericsson would provide the stay-at-home blueline presence for Jones to use his size and speed to fire rockets from the point or sneak down the boards for the back door set-up/shot.

According to CapGeek, the combined salary cap hit for Tootoo and Ericsson is $5.15M and the cap hit for David Legwand totals $4.5M. The logistics of the trade make sense and Detroit becomes an offensive/defensive threat in their forward core and Nashville gets a fan favorite in Jordin Tootoo back along with the defenseman that Nashville should have picked up in free agency.

If Not Detroit, Where?

Although the Detroit angle seems far reaching, there are some other teams that could benefit before the start of the season with the addition of David Legwand which brings us to another rival squad: the Vancouver Canucks.

The Canucks have maybe the best top-two centers in the league with Henrik Sedin and Ryan Kesler. After this, the Canucks have serious questions in pivotmen with Lapierre, Malhotra and Roy no longer on the roster. With Ryan Kesler battling injury the past two seasons, Legwand would easily add huge dividends to the Canucks third line and be able to readily move up to the second line in the case of Kesler succumbing to injury.

Vancouver is about $2.25M away from the cap ceiling and with David Legwand's cap hit they would be pushed over the cap ceiling. To alleviate this, Vancouver could offer up David Booth who has an albatross of a contract ($4.25M for two more years) that hasn't, as of yet, lived up to his full potential with the Canucks. If Booth could stay healthy and recover fully from his ankle surgery and calf setback, he could become a monster as a replacement for Sergei Kostitsyn on the left wing. The only issue here is that he has not been cleared for play as of yet, so Nashville would have to hesitate and maybe have Vancouver add a 3rd/4th round pick to stir the drink and have a stipulation of which round pick (3rd or 4th) Nashville would get depending on how much ice time Booth sees in his first two years: aka the Matthew Lombardi deal.

Although it is highly unlikely that David Legwand would opt out of his NTC for a team that is a longshot at making the playoffs, it needs to be addressed that the Buffalo Sabres could also use the talents of Legwand in the wake of their stand-still negotiations with Cody Hodgson. As trading partners before (Paul Gaustad), Nashville has recent dealings with the Sabres and aside from Ennis and Hodgson, the team is in dire need of a defensive centerman who can put up points. If by some chance an agreement can't be reached with Hodgson, the Sabres are in a pickle with Ennis and Ott being the only viable options. The Sabres also have over $10M in cap space room and could offer up picks and/or prospects to get the deal done without sacrificing any of their roster which currently has only eleven forwards signed for the 2013-2014 season.

In summation, the Predators and their fan base may have to (begrudgingly) get used to not seeing David Legwand in blue & gold after this season. It is possible that the Preds could re-sign Legwand, making all this speculation moot, but if the possibility is there to trade him and at least get some prospect/picks at the trade deadline or the aforementioned scenarios come to fruition before the start of the season, shouldn't David Poile pull the trigger rather than see Legwand walk away for nothing, just like Ryan Suter did last summer?