New at the OTF Store: Get Your "Let's Go Perds" T-Shirt!

Share All sharing options for: New at the OTF Store: Get Your "Let's Go Perds" T-Shirt!

The great thing about working for a professional sports franchise is that you get to bask in that big-league glow, and when the team does well, even the janitor's chest puffs out a little bit.

The downside? Even the most minor of mishaps can go viral in a hurry...

As detailed by J.R. Lind over at NashPost Sports, a typo at the tail end of an email to Nashville Predators season ticket holders exhorted fans with a hearty "Go Perds!"... and things kinda took off from there. The conversation on Twitter has taken up the rallying cry, Keith Olbermann featured the snafu last night on ESPN2, and Deadspin even took rare notice of Nashville hockey.

So why not embrace this new nickname perdmutation permutation by wearing it proudly around town? 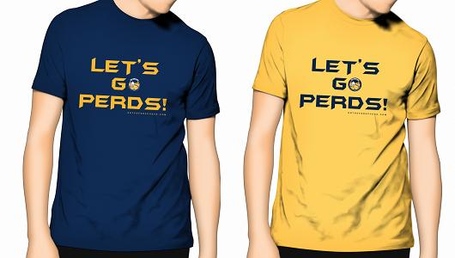 You can order them at our outlet at GameDay Depot right here, where a portion of each sale goes to support OTF.

And you have to admit, they look a whole lot better than those new Buffalo Sabres jerseys, eh?