On Thursday the Predators ventured up to snowy, stormy Boston to take on the Bruins. Despite concerns made very reasonable by the teams' previous meeting (which ended poorly for the Preds), this ended up being a really fantastic game! Both teams played well, both teams worked hard, there were great chances and beautiful goals all around, and the Preds came away with a well-earned point. Let's take a peeksie at one of the goals from Thursday. As Don Cherry once said, "LET'S GO!" 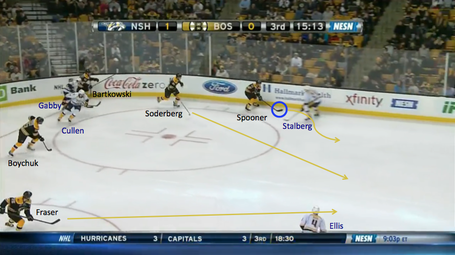 For what it's worth, I've been a fan of Viktor Stalberg this year, but (and "my brother once told me that nothing someone says before the word "but" really counts" - Benjen Stark) his move right here was HORRIBLE. I have no idea what he was thinking. Nothing, I guess. He decided to like... step up? on Ryan Spooner. Spooner is a rookie. He's up from the Bruins' AHL team because of injuries. He walks right around Stalberg. WTF, Viktor? Soderberg and Fraser (a basically-rookie but technically not-rookie and a long-term healthy scratch who's played 12 games) see this and take the hell off down the ice to start off a lovely 3-on-2. 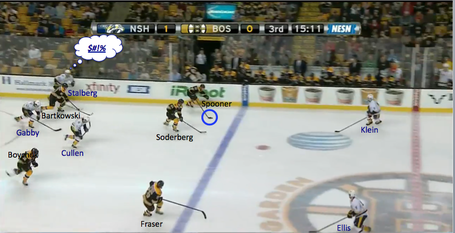 So Stalberg is caught way behind because of a really stupid move, but luckily Gabby and Cullen had JUST gotten on the ice and had fresh legs. Cullen, especially, got on his horse and hoofed it back up ice. He needs to get some serious props for his backchecking here, because he is quick when he needs to be. I hadn't realized. It would have been nice if Stalberg had been able to use some of his speed here, but it was the end of a shift and he was clearly worn out. 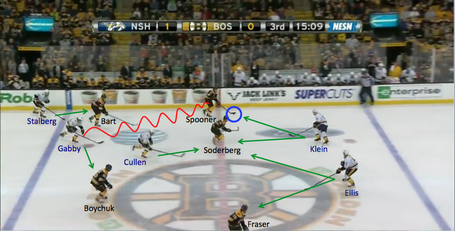 When there's a 3-on-2, the job of the first backchecker is to take the third man high - or basically whoever he is closest too. His job is to break up any potential passes and tie up any available players. Cullen is the first man back, and he's going after Soderberg, as Fraser is just too far away to be a reasonable pick up.

Klein and Ellis are splitting up the oncoming forwards, with Klein focusing on the puck carrier and Ellis focusing on the other two until Cullen gets back and/or they get far enough into the zone that he just has to make a decision (which is what ends up happening).

Now as for Gabby and Stalberg... The moment Gabby picks his head up, he gets Puck Envy. He doesn't take his eyes off Spooner for a second. This is a problem because not only is Klein already worrying about Spooner, but also Cullen is ahead of him and closer to Spooner. This is where the second break down that leads to the goal (the first was obviously Stalberg's atrocious turnover).

Stalberg is behind Gabby, so he should be telling him that he will cover Bartkowski so Gabby can look around and see who else needs cover (hint: it's Boychuk, or just generally the right side of the ice, which is wiiiide open). 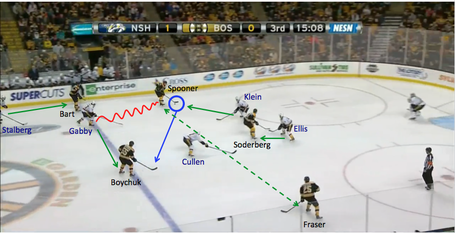 Klein, Ellis, and Cullen all are in perfect position right now. Ellis has made the decision to just take Soderberg, Klein is pressuring Spooner, and Cullen (having realized that he couldn't get to Soderberg) is cutting off the passing lane between Spooner and Fraser. This means that the second man back (Gabby) now needs to cover any open Bruin (...Boychuk. It's Boychuk). But he's still staring at Spooner and the puck, so he has no idea that Boychuk is even there. All he has to do is turn his head and look around. 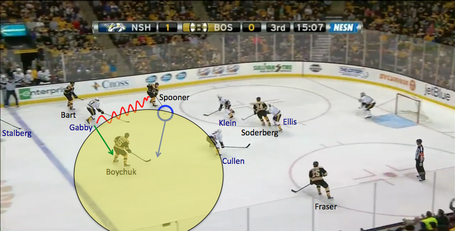 That's a lotta room for Mr. Boychuk. Gabby is still entranced by the puck, which leaves his man very much uncovered. Worth noting, I suppose, is the fact that Stalberg is still wheezing his way through the neutral zone. This is why you don't make stupid turnovers when you're on the tail end of a shift. At least he didn't just go for a change, like Tits. 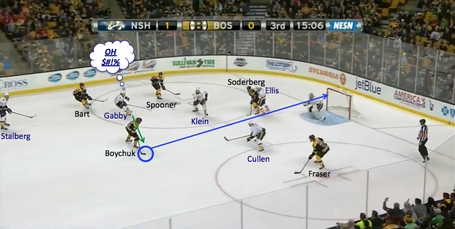 Spooner chooses the smartest of the three options and chuks the puck to Boychuk (yuk yuk yuk). Only then does Gabby even turn his head in that general direction and realize that there's a dude there. All alone. With the puck. Boychuk has a direct shot at the net, as Ellis has harassed Soderberg off to one side and Cullen is occupying the passing lane to Fraser. 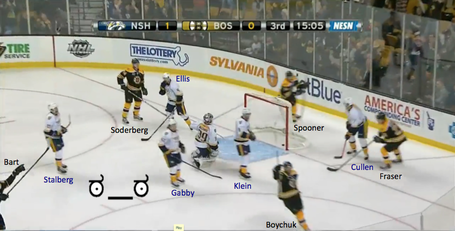 Having watched a lot of Bruins games over the last two seasons (pretty much all of them, thanks to Boyfriend), I'll tell you right now that Johnny Boychuk has quite a decent shot. He might not score often, but his shots frequently allow his teammates to poke the puck around the crease and into the back of the net. He knows what he's doing (and where he's going) with it. This one pinged off two posts on its way into the net.