Before the 2013-2014 campaign got underway, the average price of Preds tickets on ticket reseller VividSeats had jumped over 40% from their market-clearing prices in early 2013. That was good news at the time, but now that we're over halfway through the 2013-2014 campaign, things are looking a bit down. Does this spell trouble for the franchise?

The Nashville Predators recently unveiled a Lids Holiday 6 Pack ticket package that offers, among other things, a free sixth game for a purchase of five, along with:

You may have even seen the Lids Holiday 6 Packs advertised on recent FOX Sports Tennessee broadcasts. Six-game packages of some sort have been popular with the sales team at 501 Broadway in recent years, with a comparable package being offered during the 2007-2008 season, and featuring Sports Seasons as the naming sponsor in another year, just to name a couple of examples.

The promotion gives fans two color-coded options: Gold (of course) and White. The former contains games to present and former division and playoff rivals, while the latter offers tickets to see high-powered Eastern Conference talents like the Boston Bruins, Pittsburgh Penguins, and Washington Capitals. Given all that, the Predators website boasts that packages start at $25 per seat, and offer up to 30% off the standard gate price.

If all that sounds too good to be true, it might be.

If you're not comfortable paying a premium for early access to playoff tickets when the team is hovering below .500, and sits in last place in the Central Division (as of this writing), or you don't really care anything about hats, even with a discount, then, as an enterprising tipster pointed out to us, you might find a better deal on the secondary market right now. That speaks volumes about the franchise's present marketability to die-hards and casual fans alike.

As of right now, fans can purchase tickets to upcoming home games at bargain basement prices. For example, on Ticketmaster's NHL Ticket Exchange, fans can buy tickets to the January 20 game against the Dallas Stars, a division rival, for just $6 per seat. There's even a block of 13 seats priced at $7/each, so you could effectively buy almost an entire row for less than $100. 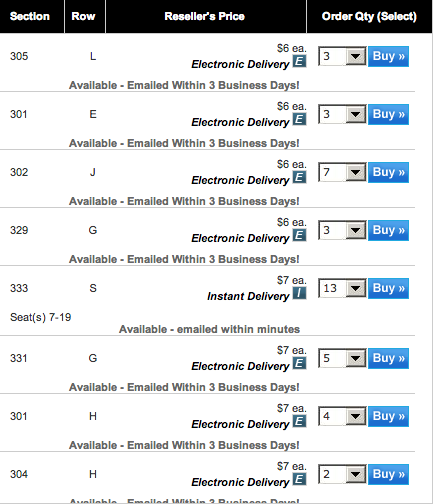 Lest anyone think we're cherry-picking our data, you can buy lower bowl seats to the same game, normally priced in the $90 range, for $39 or $40 each. 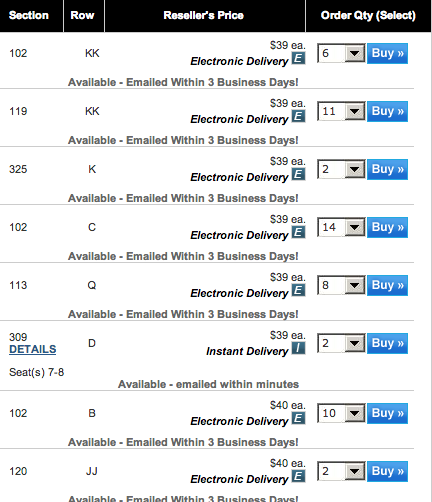 On ticket reseller StubHub, fans can find comparable deals for the same matchup.

In economics, we think of a price as the point at which the marginal benefit to the consumer equals marginal cost to the producer or, more simply, where supply and demand levels intersect. Tickets selling at very low prices when there is very little supply suggest there is very little demand right now for either (a) the specific seats listed as available on the reseller market platforms described above, (b) tickets to watch hockey on January 20, (c) tickets to see the Dallas Stars, or worse, (d) Nashville Predators games in general.

When we asked whether these bargain prices had any impact on sales of the Lids Holiday 6 Packs, the Nashville Predators seemed upbeat.

"While we don't have a package to compare to from last season," the lockout-shortened season that didn't begin until after the holidays, "the Lids Package is selling similarly (on par) with others," said Preds Senior Vice President of Hockey Communications and Public Relations Gerry Helper in an email to OTF. "[W]e have sold out eight games [out of 22] to date, our average ticket price and ticket revenue are projected to be highest in franchise history, and our percentage of capacity is also comparable to recent years," he continued.

It is intuitively true that low prices on the secondary market do not affect the Predators' ticket grosses, or profits on seats. The Predators have already received full price for those tickets from the individuals now selling them online at deep discounts. "I would caution you to not read too much into one game," said Helper. That's a fair caution, as we did not undertake an extensive review of prices for all remaining home games.

Helper also added, "[T]here are other games where the secondary market pricing may well be above the price season ticketholders have paid." That may be especially true of, for example, the April 12 game against the division rival and Stanley Cup champion Chicago Blackhawks, who may flock to the secondary market instead of having to purchase an additional Preds ticket. Indeed, on the NHL Ticket Exchange, seats in the 300s for the last home game of the season begin at $75 per seat, and go as high as $544 per seat, and tickets on the glass in Section 105 are currently going for a whopping $1,200 apiece. 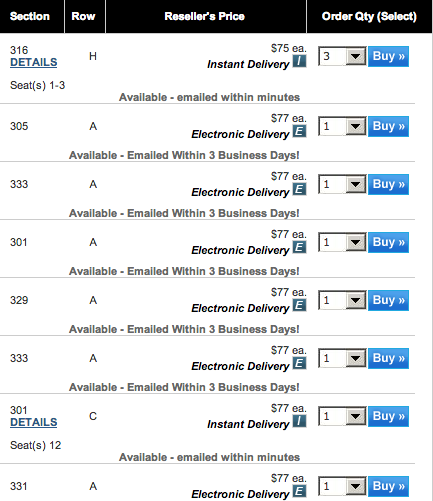 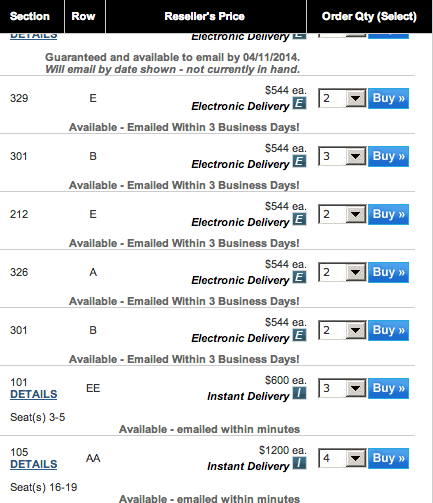 Analysis: Potential Rewards of "Keep the Red Out" Campaign Paper Over Core Issues 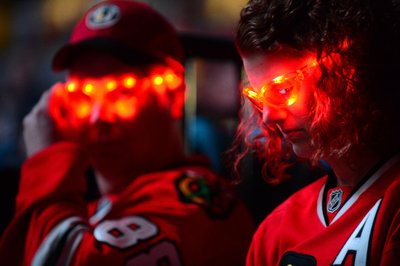 But we all know Blackhawks fans travel very well, and we should expect demand (and therefore secondary market prices) to be high. Concentrated demand for those games was the basis for Nashville's "Keep the Red Out" campaign in the first place. What then can we say about the division rival games, like the January 20 Dallas game, that should draw well, but for which demand is still very low? Does weak demand in secondary markets cause concern for the Predators, whose real revenue streams come from sponsors?

"[W]e have been fortunate in the last couple years to secure long-term partnerships with . . . Bridgestone, Nissan, Fifth Third Bank, AT&T, Vanderbilt University Medical Center, etc.," wrote Helper, "as well as long-term broadcast partnership with FOX Sports Tennessee that is bringing more games to viewers than ever before." Helper also noted a number of other types of Preds partners, as evidenced by the Twice Daily's and DEX All-Inclusive Zones at Bridgestone Arena, four-goul Frostys from Wendy's, and McDonald's Family Four packs of tickets in addition to the Lids Holiday 6 Pack.

In other words, they have enough money coming in the door right now to not worry too terribly much.

We do not have a comprehensive data-based picture of the median Preds fan, but here are a couple of factors to consider that might, either by themselves or in some sort of combination, explain the weak demand and low prices in secondary markets:

That's a segue into perhaps the most troubling aspect of this story: even in a year that saw the Tennessee Titans perform so poorly that they fired head coach Mike Munchak and all his colleagues, and the Predators shouldn't have had to compete too hard for Nashvillians' limited entertainment dollars, Nashvillians (we assume, since we know that Stars fans don't travel well) still don't seem to view the Nashville Predators game experience as a value, even at $6.

One possible problem is "Predator hockey." It's boring to watch a team not score goals. The Trap might have helped the New Jersey Devils to the Stanley Cup championship in the 1990s, but no amount of bacon-on-a-stick or Vince Gill performing Pure Prairie League's "Amie" at intermission will make it exciting hockey to watch.

To the Nashville Predators' credit, they've built a franchise in the black that has been a near-perennial playoff contender. But you're not going to get many casual fans to become season ticket holders by lulling them to sleep with one-goal games. What's worse, for all the playoff runs the Preds have managed under head coach Barry Trotz, defense has yet to win Nashville a championship, much less a semifinal or final appearance.

To hear Dirk tell it, as a coach's voice can sometimes lose his players' ears, the Predators management, with General Manager David Poile at the helm, has lost the attention of fans. Perhaps the most egregious blunder of David Poile's tenure in Nashville was letting current Minnesota Wild defenseman Ryan Suter walk to free agency without locking him up to a long-term deal, or without getting anything in exchange. That's not to say he didn't try as hard as he could to retain an elite talent, but in the business of hockey, fans and owners expect results -- not excuses. There is only one Stanley Cup, and the NHL does not give an "A" for effort to GMs, even ones that work hard.

If season ticket holders are taking massive hits on tickets they've already paid for, while people around Nashville aren't seeming to buy those tickets, even at rock-bottom prices, one must wonder: is there a deeper, systemic problem with the marketability of "Predator hockey?" This story will continue to write itself in the coming weeks and months, and onlookers should continue to keep an eye on the secondary market. For an organization that has advanced past the first round of the playoffs just twice in its history to suggest they aren't too worried about weak demand because of long-term sponsorship deals seems a bit cavalier. The Nashville Predators may be financially sound right now, but prospects for a return to double-digit consecutive sellouts are dim. Not winning a championship (again) won't do much to attract top-flight talent when the salary cap rises this summer.

Welcome to the Hockeynomics Death Spiral...