Hockey Abstract and the Nashville Predators: A Book Report

The 2014 Hockey Abstract is the perfect source to catch up with advanced stats before the season starts. There is no shortage of content with several key insights into how the Predators may perform this year.

Share All sharing options for: Hockey Abstract and the Nashville Predators: A Book Report

As many of you know, Rob Vollman released his first annual (second year straight) Hockey Abstract in August. This incredible resource contains over 300 pages of content and is great for analytics veterans and rookies alike. Authors Rob Vollman, Iain Fyffe, and Tom Awad, along with illustrator Josh Smith, have made an intuitive and informative piece that I highly recommend for any fan who wants to learn more about hockey analytics and hockey in general. I'm going to highlight some of the key points of this year's report with a focus on Nashville.

Included in the depth of content are essays for each team in the league. The authors correctly avoid making predictions about standings and instead show major trends. A checklist after each essay and a rough estimate of where the team might finish the season is a perfect way to learn about the top-level stats of each team.

Nashville's section is much more promising than I thought it would be. They predict Nashville "could compete for one of the final playoff spots". This is a conclusion that many of us agree with, but how did they get to that point?

I don't want to get too into this section as it is worth checking out all the teams, but, for the most part, Nashville looks to be in good shape. With young players on offense and defense (hopefully) improving each season, I suspect the Predators may surprise a few people. If anything, the forward depth on this team is a blessing and a curse. Calle Jarnkrok and Filip Forsberg are quite possibly both ready to be full-time NHLers but the number of veterans on this team make that a complicated situation.

Isolating individual talent and contribution is a near impossible task in a sport like hockey, and segmenting those contributions into situations like 5on5 and power play time is even more daunting. Hockey Abstract attempts to do just this. By using stats such as individual point percentage (IPP%), offensive zone start percentage (ZS%), and modified points per 60 (MP/60, assists only worth 0.64 points) among others, they were able to compile a list of top power play performers. This list is far from perfect, and the authors acknowledge this, but it is the best attempt I've seen at ranking power play contributions.

While no Predators forward made the consideration as top power play specialist, James Neal, Craig Smith, Mike Ribeiro, Derek Roy, and Colin Wilson all cracked the top 100. Neal ranked in the top 10 and figures to add a big boost to an already underrated powerplay that finished in the top half of the league (12th overall).

While Nashville is no slouch when it comes to forward depth on the power play, their defensive corps is the real pillar to their success. Shea Weber is the obvious leader of a talented group of offensive defenseman as he is tied for top power play defensemen with Erik Karlsson. The difference is basically in how the two players work on the power play. Karlsson is the roaming playmaker while Weber is the venomous shot from the point, which makes each player perfect for their respective teams. Weber doesn't need to be a playmaker with the other defensemen on the roster.

Nashville may have the most balanced group of power play defenseman. Included in the top 100 are playmakers Roman Josi, newly re-signed Ryan Ellis, and Seth Jones. It's special to have a group of defenseman this balanced and skilled on the power play.

Nashville is in a good spot to improve their power play efficiency this season as the young players, both forwards and defenseman, improve their game. 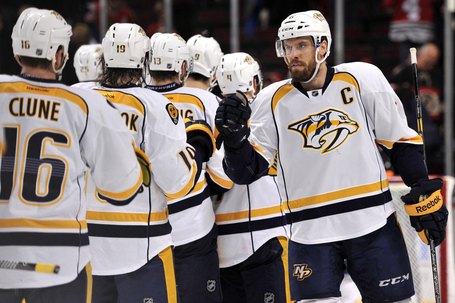 Hockey analytics have been improving at a rapid pace the last few years with regards to skater evaluation. Conversely, goalie analytics have moved at a glacial pace (until recently) with major sources and organizations still relying on the archaic measurement of goals against average. That all looks to be changing however with more and more quality analysis coming from places like Goalie Guild, "The Shot Quality Project" from Chris Boyle at Sportsnet, and bloggers like Clare Austin.

You can now add Hockey Abstract to that list. This year's edition reviews several ways to evaluate goalie performance through using measurements including quality starts, home plate save percentage, and difficulty of assignment. These tools represent the tip of the iceberg when it comes to goalie analysis, but are a good introduction into goaltender analytics aside from using 5on5 save percentage; currently the most accepted tool for goalie evaluation. So what do these stats measure?

Quality starts is a way to review goalies without relying on win/loss totals. A goalie who has 35 saves on 37 shots and loses still had a great game. A goalie who stops 16 of 20 shots but wins in a shootout still had a terrible game. As stated in the book, a quality start "requires a .917 save percentage, while playing at least as well as an emergency AHL call-up (88.5%) if he only faces 20 shots or fewer." This is something fellow OTF staff writer Nick Rockwell and I are going to include in our game tracking stats this season.

Quality starts give us a good top-level view of goalie performance, but we need more to actually analyze talent level. Home plate save percentage is a way to do this. The home plate area, created by Vollman, is "...from the goal post to the two defensive zone faceoff dots, and then straight up to the top of the faceoff circles." While shot quality is most likely not a system driven or repeatable aspect from a team standpoint, it most certainly affects the difficulty of a shot. Home plate save percentage is a way to measure shots without assuming they are all equal. It is obvious that this segmentation of shots is along the correct thought process as goalies save percentages in the home plate area average .855 compared to .958 from outside it.

We can use these three new measurements to attempt to understand Rinne's true talent level. Unfortunately, the results are pretty inconclusive as often happens with analytics.

Hockey Abstract is a tremendous source to learn about existing statistics like Corsi and Fenwick as well as potential new ones like difficulty of assignment. I've only covered a miniscule portion of what it has to offer, and some notable sections to check out that weren't covered here are "shot quality", "what makes good players good?", and "what are score effects?". You can purchase the PDF version or a hard copy here.