Share All sharing options for: Vince Gill to Join Select Predators Broadcasts in 2014-15

Towards the bottom of a press release regarding the Nashville Predators Foundation was this little nugget...Vince Gill has been added to select (and as yet unannounced) broadcasts for the 2014-15 season to bring a "fan perspective" to the official coverage. Vince's status as a fan and as someone who supports hockey in this community is unquestioned, but will he add something to the broadcasts? Time will tell, but from what I've seen, I think he's certainly capable... 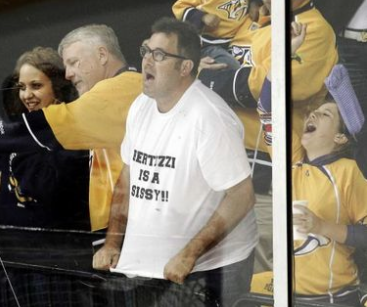 At the inception of the Nashville Predators franchise in 1997, the team made a commitment to not only develop a successful team on the ice, but also recognized the importance of playing a large role in its home community of Nashville. A 501 (c)(3) charity, the Predators Foundation strives to meet the educational, social, health and cultural needs of the community by offering unique resources and financial support to local youth-oriented organizations. Between grants and other charitable donations, the Foundation donated nearly $900,000 in cash to community organizations during the 2013-14 season.

"Regardless of where she is residing, Kristen Laviolette is well-known for her dedication and commitment to the people of that city," Nashville Predators Foundation President Sean Henry said. "Her spirit and passion for making a positive impact on her city is just one of many great things to be happening to the Foundation."

At the Ford Ice Center ribbon-cutting ceremony on Sept. 12, Nashville Predators CEO Jeff Cogen formally announced a partnership between Vince Gill and the Nashville Predators that will work to provide scholarship opportunities for kids to participate in hockey and skating programs at the new facility. One of many philanthropic endeavors Gill is involved in, the new scholarship program is just the latest example of Gill’s dedication to serving his community.

"Vince Gill is a Nashville treasure and is at the forefront of virtually any initiative that puts kids in the position to make good choices," Henry said. "Vince’s generosity has been a true example of how to make an impact in one’s home community, and by leveraging Vince’s spirit and popularity with the Predators fan base, the Nashville Predators Foundation will be able to continue their mission of making a difference in kids’ lives."

In addition to his appointment to the Nashville Predators Foundation Board of Directors, Gill will also join the Preds broadcast team for a select number of games this season. Gill, who has been a hockey fan since his early days growing up watching the Central Hockey League’s Oklahoma City Barons, will bring a unique fan perspective to the Preds broadcast booth.

"I’ve been involved with the Nashville Predators since I first heard that an NHL franchise was on its way to Nashville," Gill said. "I’ve seen the incredible work that the Nashville Predators Foundation does in the community, and while we’ve worked together in the past, I’m looking forward to continuing to build and strengthen that relationship in the weeks and months ahead. Along with that involvement, I’m excited to join the Preds broadcast group to talk hockey and interact with some of the Predators’ great fans."

During the 2014-15 season, the Nashville Predators Foundation will raise money through annual events like Preds & Pins, the Gnashvegas Casino Night and Auction and the Wine Festival and Tasting, special game night fundraising programs, auctions, the Dex Score and Win program, grant program and more. For more information on any of these events or initiatives and the Nashville Predators Foundation, visit www.nashvillepredators.com/foundation.