Looking Behind, Forging Ahead Week 4: Prep the Passports

Share All sharing options for: Looking Behind, Forging Ahead Week 4: Prep the Passports

The first regulation loss of the season finally happened, and it was one heck of a stinker. Oh well, the Predators still picked up four points, including a monstrous effort against Chicago. If they play like they did on Thursday most nights, that's going to result in a ton of wins.

We can finally start comparing how the Preds have been doing week to week. Have a look. (Scroll to the side to see full table)

Preds took a little bit of a step back this week. It's not the most concerning thing in the world, but they are getting some favorable save and shot percentages. Keep an eye on this.

As for the players, slide to see week vs. season: 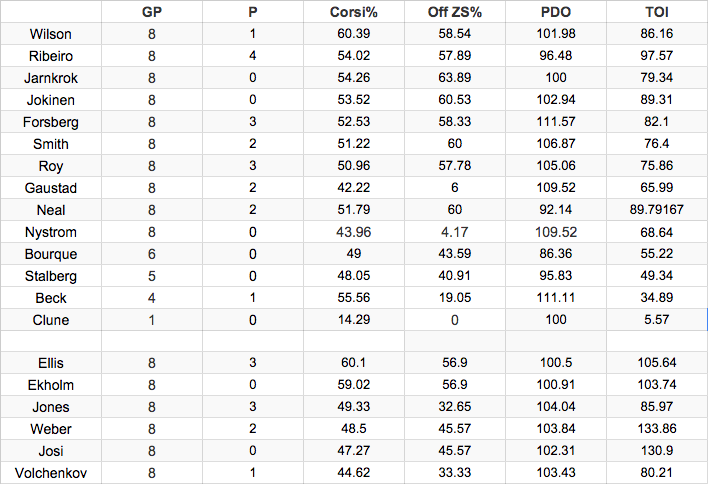 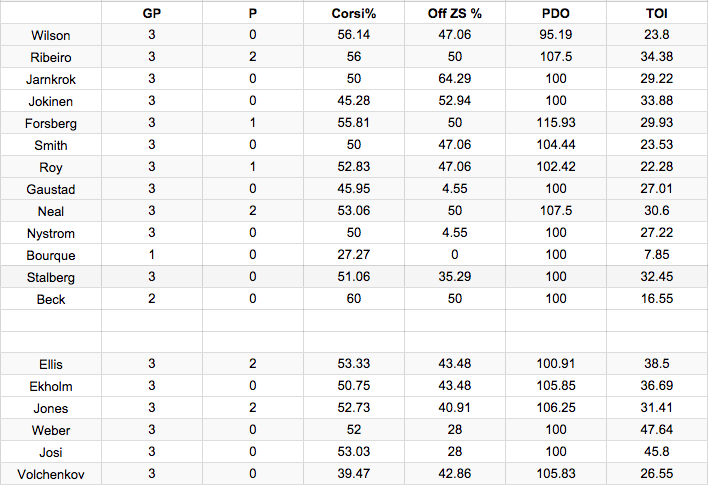 Olli Jokinen did not have a good week, and Gabriel Bourque is struggling on the fourth line. That could be a factor of having Colin Wilson leaving his line. Wilson continues to thrive, leading me to believe it's just going to be a matter of time before the points start coming. (Where have I heard that before?)

James Neal's super high PDO evens out when you look at the overall numbers, and realize it was crater deep last week. Expect him to be somewhere between what we saw this past week, and what we saw earlier this season.

Rich Clune may not be on this chart next week.

Golden Players of the Week

Not-So-Golden Players of the Week

Preds are out on the road until November 11th (thanks, Country Music Industry!), but there's only 2 games this week.

Welp. For whatever reason, the Preds were AWFUL against the Oilers last season, with 13 goals against and only 2 goals for. In case you missed it, Edmonton was one of the worst teams in the league, finishing dead-last in the Western Conference, 10 points behind the Flames. They're off to another rough start, with a record of 3-4-1 after their first 8 games, so this is definitely a game the Preds need to win. If this team is gonna make the playoffs, they simply can't afford another 0-3-0. As if the losses weren't bad enough, the Oilers also ruined Thanksgiving.

Reasons to Boo the Oilers

The Flames are currently in 4th place in the Western Conference, although the shine comes off that start a bit when you notice they've played 2 or 3 more games than the other top teams in the standings. They did beat Chicago despite giving up 50 shots, which was hilarious, but they also beat the Preds in a shootout...which wasn't. Calgary hasn't been great at home this year (1-2-1 so far) so perhaps the Preds can continue that trend.

Reasons to Boo the Flames

Jason: 2-0-0. Gotta be. Losing to the Pens, while frustrating, is understandable. Not so much for either of these teams.

Jon: 1-1-0. The loss is going to be one where they should win the game, but don't for some reason. Edmonton gives the Preds fits, and they've been playing much better as of late.