Prepare to be bombarded by foes from the Atlantic division, with games against the Leafs, Senators and Panthers.

Share All sharing options for: Looking Behind, Forging Ahead Week 7: Atlantic Assault

Sorry for missing last week everyone. Stuck in a car and all that. Let's just get to it, shall we? 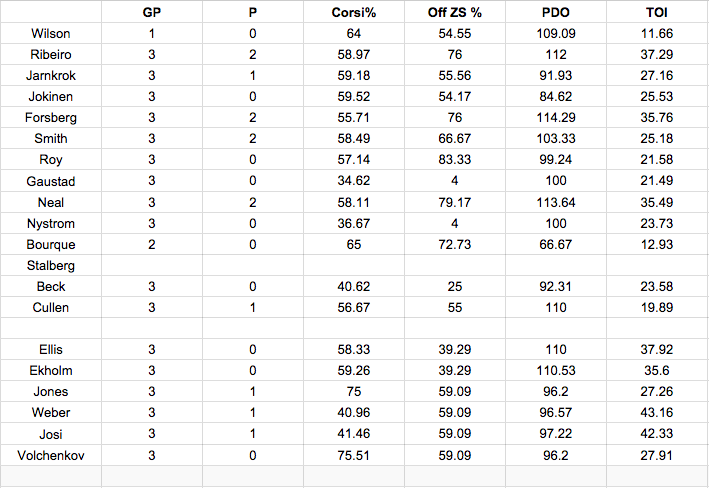 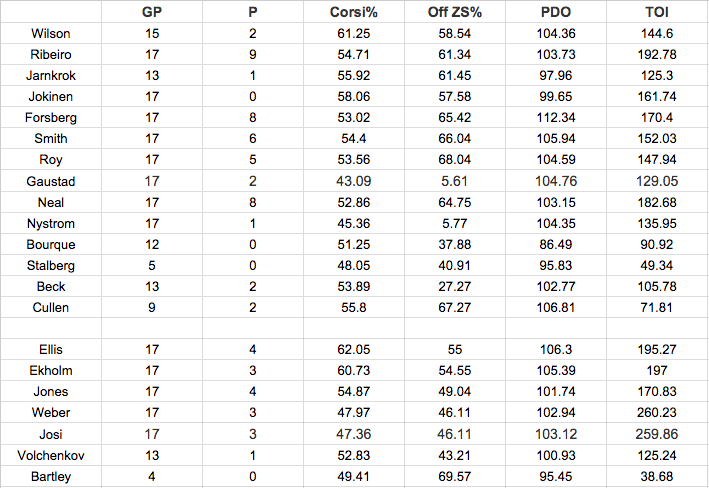 Hoo boy. Filip Forsberg has been playing out of his mind, and most of that is due to just his pure talent. However, almost everything he is shooting is going in, and that will have to change sooner or later. Don't be surprised to see him cool off for a few games, or even longer. It's part of growing as a player, and totally natural
It's nice to see the defense's zone starts evened out a bit more. Earlier in the season, Sethchenkov was starting seemingly every shift in the defensive zone. They're still relied on for that, but not quite as heavily, and their numbers are looking much better for it.
Since we missed last week, I would be remiss to point out that Victor Barley did below average, despite very sheltered minutes.
I'm very curious to see if the Matt Cullen, Derek Roy, Olli Jokinen trio sticks together for a while, and if they do, how they perform. All three guys have been around since the Roosevelt Administration, (Teddy, not Franklin), which could cause some problems. Yet, none of them are playing particularly bad, though Jokinen and Roy haven't been doing much good either.

Not-So-Golden Player of the Week

Not much to see here. Some of you may have enjoyed the 4-2 win in November that featured a 4 point night from Matt Cullen and a 3 point night from Craig Smith. That's fine, but for my money the highlight has to be the 4-0 shutout by the Leafs here in Nashville in October, or as I like to call it, the "Reverse Everything Game". Loss instead of a win, reverse free donut shutout, reverse 4 goals and a Frosty, even a reverse Goo-Goo Goal (or 1 day gym membership, whatever). Bizarre.

Reasons to Boo the Leafs

Wrapping our first season series in mid-November. As you may recall, the Senators were kind enough to give us a win on opening night, for which we are forever grateful. We also got to see David Legwand head to the wrong box on a penalty, which was all kinds of awesome.

Reasons to Boo the Senators

Yay! Another no TV game! As if you needed a reason to get to the arena on a Saturday night anyway. The Preds got 3 of 4 points against the Panthers last year, including a 4-3 win here in Nashville in October. I remember that game because it was the first time in a while I'd actually had fun at the arena...bit of a back and forth game, 7 goals scored, a win and a free Frosty. The feeling wouldn't last.

Reasons to Boo the Panthers

Jon: 2-1-0. The Panthers are actually playing really decent hockey, but are just on the unlucky end of the final score. I have a feeling that Preds handle both Canadian teams, but somehow fall to the Kitties.
Jason: 3-0-0. Because why not? All these games are winnable, so let's start expecting excellence.