A short week with only one win out of a possible two. Harumph.

Share All sharing options for: Looking Behind, Forging Ahead Week 5: Busy Times

Only two games appeared on the calendar this week, because we decided not to count the game against the Canucks. *shrugs* Not a whole lot to look at, but let's see what we can find.

Face-offs are slowly starting to trend up. Erm, at least we hope so. Kind of hard to tell after only two games. That PDO scares the crap out of me, by the way. 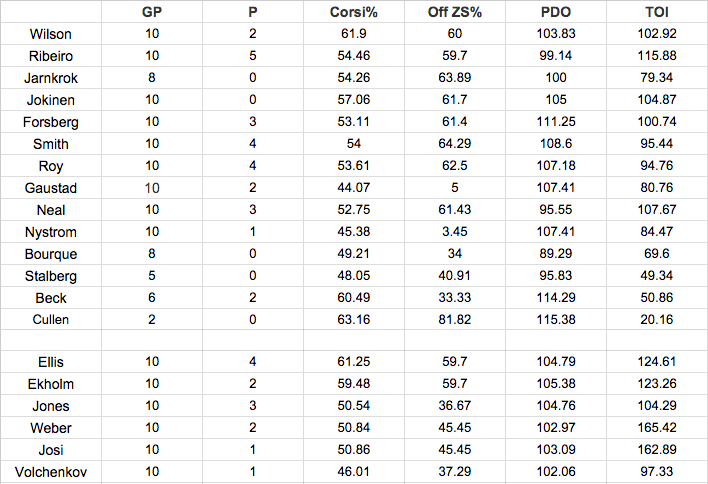 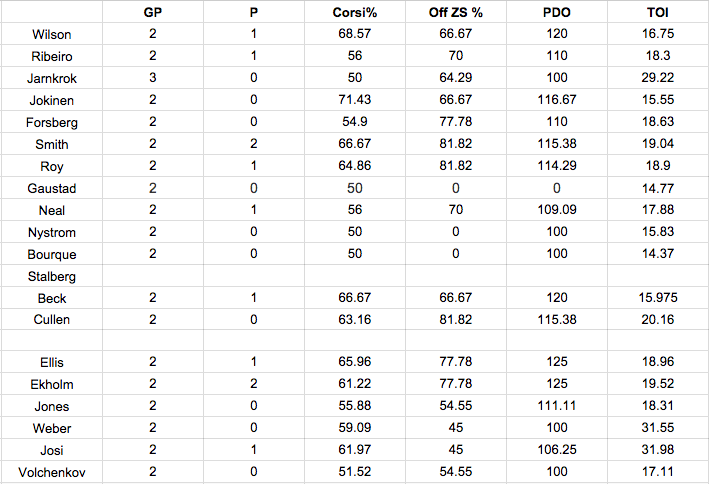 Look at that, Seth Jones and Anton Volchenkov were given some better zone starts, and it resulted in better number. Whoodathunk?

Matt Cullen certainly did provide a boost to the second line, and that was evident just by watching the game. Their numbers weren't terrible, but something did seem a little off. Hopefully that can continue through this next week. (Foreshadowing alert.)

Not So Golden Players of the Week

The annual CMA trip concludes with four games this week, including three in the division. Losing that Calgary game on Friday was certainly disappointing, but a winning trip is still within reach. Let's get it started with...

One day, maybe we'll get an explanation for why the Preds hammered teams like Chicago and San Jose last year but struggled against the Vancouvers and Edmontons of the world. But that day is not today. The Preds did manage to eke out one victory against the Canucks last season and (I promise I read this like 4 times so I know it's true), it was their first win of the season when trailing after 2 periods. Snapped an 0-21-2 streak. The recap also says Nick Spaling scored a goal, so I guess the whole thing could be suspect...EVERYBODY knows he scored the first of his career just the other day.

Reasons to Boo the Canucks

Last time out was pretty successful, right? A 2-0 win, Pekka got the shutout, and James Neal scored his first goal of the season. If the Preds could just go ahead and run that one back again, that would be great.

Reasons to Boo the Jets

The first meeting was the Paul Gaustad Show, as #28 racked up a goal, an assist and a fight. Good times. Seguin and Co. were totally invisible, but Antoine "punchable face" Roussel did have a goal and FOURTEEN penalty minutes. So I guess that's something. As of Sunday, the Stars are a pretty weak 1-0-4 at home, so hopefully the Preds help them continue that trend.

Reasons to Boo the Stars

So...not many good times to be had here. The Blues finished with 111 points last year, and the Preds contributed more than their fair share. I guess the shootout loss will have to be the highlight, as it's as close as the Preds got to beating St. Louis all season.

Reasons to Boo the Blues

Jon: 2-2-0. They are going to outplay each and every opponent, but only get rewarded twice. I blame the special teams.