Looking Behind, Forging Ahead Week 9: Toughening Up

The schedule from here on out starts to get a little more difficult than what the Preds have been used to.

Share All sharing options for: Looking Behind, Forging Ahead Week 9: Toughening Up

Now, no one is saying the Nashville Predators have gotten to where they are in the standings because of an easy schedule. That'd just be silly. They done it because they've worked hard, gotten great goaltending, timely scoring, and have a defense that is lightyears beyond anyone else's. Now they just have to do all that while feasting on a steady diet of Cup contenders and playoff hopefuls.
Just this month, they two meetings with the Blues, Bruins and Blackhawks, see Minnesota and San Jose for the first time, and have to acknowledge that the Philadelphia Flyers exist. Who's up for some good hockey this month?

War on Ice has done away with 5v5 "Close" measurements. You can read about it more in depth here, but now we'll be looking at the Predators' play in all 5v5 situations, regardless of the score.
Not a whole lot of change on the team level. Even though some of the numbers were inflated because of the Maple Leafs game, the Predators are still consistently outshooting their opponents, scoring more goals than they allow, and are still not that great at faceoffs. Carry on. 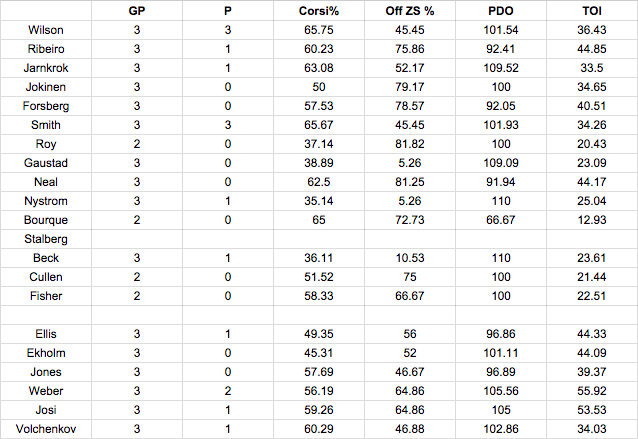 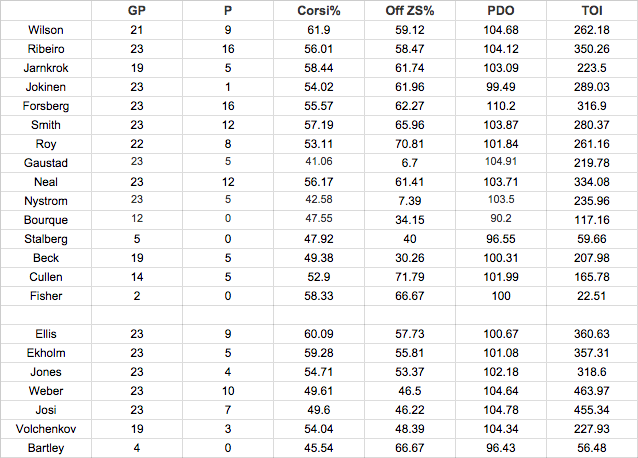 "Regression" is a hot-button topic around these parts, but take a look at this week's PDO of the guys on the top line. Barely above 90%. That's basically what we mean. See? No falling skies or prophecies of doom here.

Welcome Mike Fisher to the chart! Viktor Stalberg is still there for right now, since he's technically with the team still. Also, if you're trying to rack your brain trying to figure out which two games Gabby Bourque got in this week, your instinct that he didn't play is correct. Oversight on my spreadsheet charting. My bad.

Beyond that, not a whole lot has changed. Colin Wilson and Ryan Ellis are still Nashville's possession darlings. I do find it interesting how the defenses assignments/zone starts seem to vary from week to week. Sethchenkov use to take majority of the defensive zone starts, but now that's been falling on Weber and Josi. However, this past week those two started a ton in the offensive zone, and Seth and Anton were back to eating up defensive minutes.

Not-So-Golden Player of the Week

Play to Keep an Eye On

What's this, now? Another drubbing by one of the worst teams in the league? Good times. Not much to highlight here, so let's go with the 5-2 loss at home on December 5th. This game had everything...a Jeff Skinner hat trick, a Viktor Stalberg goal, 9 saves in relief for Carter Hutton, babies in Mozart wigs...

Reasons to Boo the Hurricanes

Game 3 in the Battle for the Central! Both games have been decided by just one goal, and I wouldn't be surprised if we see another one. Unless Martin Brodeur starts, in which case the Preds win 11-0. Because he's 100 years old. My favorite game was the first one in STL this year...the Preds won, and we were there to see it!

Reasons to Boo the Blues

Oh no...not these bozos again. Thankfully, this is the final trip to Nashville for the Hawks and their alcoholic idiot fans. Things didn't turn out so well for all the folks in Griswold jerseys last time out, as James Neal singlehandedly outscored the Hawks 3-2.

Reasons to Boo the Blackhawks

Jon- 1-1-1. The lone win is going to come against Chicago on Saturday. Chalk up an overtime loss to Carolina, and a regulation one to St. Louis. Damn Blues.

Jason- 2-1-0. I'm finding it hard to not vote 3-0-0, but I'm trying to be realistic. Really hoping one of the wins is against Chicago...I love sending those dummies home disappointed.