Share All sharing options for: Winter Wonderland: Preds aim to connect with fans during Olympic Break, gearing up for Season Ticket renewals

The Nashville Predators invited a variety of media members down to Bridgestone Arena Thursday afternoon, to take a trip through the Winter Wonderland they're hosting this weekend and next, as well as check out the new Tavern '96 and get a business update from team COO Sean Henry (which held some interesting tidbits for you season ticket holders).

This is a family-oriented fun event that primarily features a huge setup in the arena rehearsal space, including nets to fire pucks at, a giant inflatable slide, air hockey tables, a gigantic video screen and seating for Olympics-watching, giant banners celebrating Nashville representatives on the various teams, and plenty of Cornhole - both the conventional kind, and the Canadian version: 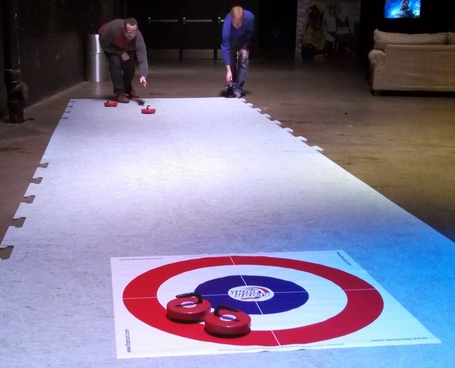 The event is free, and there is food & drink available for purchase (cash only, though).

After trying our hands at curling for a bit (done on a synthetic surface with "rocks" that roll rather than glide, but still highly addictive and fun), we repaired upstairs to the new Tavern '96, which just recently opened for business on a regular basis. Intended to be an everyday extension of the arena, available for people who want to grab lunch, or a bite before a concert, etc., it features a tasty menu (the Meatloaf Burger is phenomenal, and I hate meatloaf) and a wide selection of beers on tap.

Word has it that there's a major branding opportunity for the tavern with a prominent Tennessee company which may be announced soon, but I wouldn't know Jack about who that might be... (hint: the tavern's liquor license isn't quite in yet, but they're working on it).

Team COO Sean Henry then held forth on a variety of points, but the overall theme is that the team is trying to maintain its connection with fans during the Olympic Break, and is gearing up for the Season Ticket Renewal Period along with the final quarter of the NHL season. I'm sure I'm missing one or more items here, but I'll summarize the major fan-related highlights:

The team is also using the first home game after the Olympics, February 27th against Tampa Bay (get your discounted tickets here and use the offer code PREDS) to hold a "Second Opening Night", celebrating the return of hockey with specials like a pre-game hour of free food for season ticket holders, a Gold-Out t-shirt giveaway, a "special guest" on the intermission band stage, and more.

Henry went on to talk further about how the newly redesigned SoBro entrance to the arena, with giant video board and the new Tavern '96, has become part of a larger "campus" with the Music City Center and the new Omni Hotel. The possibilities are pretty exciting in that regard when you think about big events down the road. Still no word on when we'll get the NHL All-Star Game here, though.

As we've seen over the last few years, the business side of the team continues to move forward on just about every front imaginable to maximize the usefulness of Bridgestone Arena, as well as their engagement with both fans and local business partners.

Now if only we can get Goo Goo Clusters back at the concession stands...