The Best of the Season Tournament Round 1: Rinne vs. The Rookie

Share All sharing options for: The Best of the Season Tournament Round 1: Rinne vs. The Rookie

We're almost ready to completely focus our attention to next year, but not quite yet. Even though the downs may have outweighed the ups this season, there were still plenty of plays, saves, goals and moments worth remembering.

To make the offseason go by a little faster, we've compiled a list of the best moments throughout the year. Each day we'll unveil a new matchup to duke it out for your votes. The winner moves on to the next round until a grand champion is crowned.

Though the stud netminder didn't have a ton of opportunity to strut his stuff this year, one save in particular stood out.

Rinne was playing his first NHL game since being sidelined by that nasty hip infection. All of us were curious how he would perform against one of the Eastern Conference's best teams, and how much rust he had to shake off. It didn't take very long to get that answer:

Let's slow that down:

Just over two minutes into the game, Rinne bailed his team out of having the dreaded "Kunitz from Crosby" line up on the score sheet. Making up for his teams mistakes? Just like old times! Unfortunately, the Penguins went on to win the game, with Kunitz making it 3-1, with a goal assisted by Sidney Crosby. So it goes.

Still, after almost a full season spent dreaming of Pekka, it was great to see him back in action.

The save that made it on every highlight show ever, and will follow Hutton for the rest of his life. Some people debated the merits of the save, since Hutton was the one who set Raffl up in the first place, and David Legwand did his best to get in the way. Those people are enormous rainclouds and probably aren't any fun at parties.

Hearing the massive "OOOHHH" from Flyers fans as they see the replay, as well as all the faces on the Preds' bench makes up for any faults. Plus, nine times out of ten that puck is buried along with the goaltender's dignity. Props to you, Carter, and your incredible fortune.

Two saves, two netminders, but only one winner. What do you think? 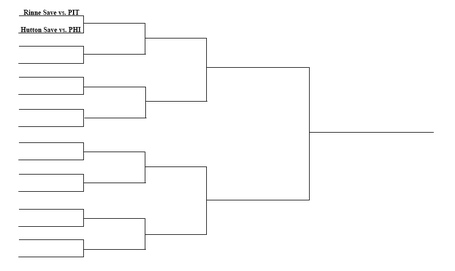