The Best of the Season Tournament Round 1: The Most Improbable

Share All sharing options for: The Best of the Season Tournament Round 1: The Most Improbable

We're continuing our journey through the season's best moments.

If you would have told us at the beginning of the season that either of these things were going to happen, we'd have called you a big fat liar. Though they both still seem incredibly improbable, they happened and were glorious.

Hutton is moving up in the world, making the tournament twice in two posts.

A back-to-back through Anaheim and San Jose during the thick of the Pacific division title race could have been two certain losses for the Preds. But not only did they take the first game against the Ducks, Carter Hutton stopped all 35 shots the Sharks sent his way.

Being only one point behind the Ducks for first place, the San Jose still had plenty to play for. It wasn't as if it they were resting their guys for the playoffs. Also, the Shark Tank isn't an easy arena for a road team. San Jose lost all of seven times in regulation last season.

For Hutton, it was a stamp of confidence to his team, organization, and himself, at the end of an up-and-down year. He made one more start after this one (a win against the Wild) which game finished his season on a five-game win streak.

Let's get this out of the way first: when ERIC NYSTROM scores four goals in one game, you better win the freaking game. The only damper on this otherwise incredible night was the fact the Predators were so inept as a hockey club they couldn't even give him the satisfaction of winning. And against the Flames no less.

Still, Nybrows scored over 25% season goal output in one night. He was shooting, grinding, deflecting and just about anything else a guy like him has to do to put  the puck in the net. You know exactly what you're going to get with him, so when he breaks his programming and goes SkyNet all over the opposition,  you can't help but enjoy yourself. 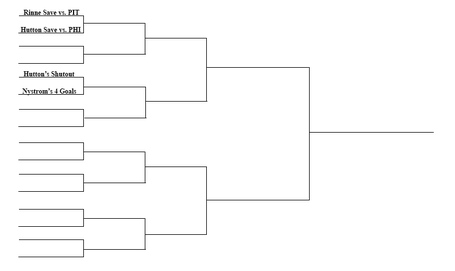