Even with the Mike Fisher news, the Preds are better off without Lecavalier

The current Flyer could actually hurt the team more than help them.

Share All sharing options for: Even with the Mike Fisher news, the Preds are better off without Lecavalier

(Editor's Note: Majority of this article was written prior to the news that Mike Fisher exploded. It's been updated to reflect that debacle, but the general point remains the same.)

The poor dead horse that is "Vincent Lecavalier to Nashville" is again being beaten mercilessly. It started up over the weekend when David Legwand signed in Ottawa, taking them out of the running for being a trade partner. Then the gears were put into overdrive yesterday thanks to Mr. Fisher's feeble foot.

It seems like a good fit, given that he hasn't gelled in Philadelphia and Peter Laviolette was a big reason he signed there in the first place. Nashville also needs an elite servicable center (now more than ever) to really maximize the threat of James Neal's shot and, you know, round out the line up. Reports are saying that Philly will to have to retain half of the salary remaining on the $22.5 million contact he signed last year. He has four years left on that deal, though, so is it worth making a play to get the aging center?

The Idea of the Trade

If the season started today, the Predators would most likely be starting with Mike Fisher, Olli Jokinen, Calle Jarnkrok, Matt Cullen, and Paul Gaustad down the middle. Originally, Jarnkrok wasn't in the discussion, but now it seems a given regardless of whether or not he has a good training camp. Adding Lecavalier to the top line would seemingly give the team decent (but not spectacular) center depth. Lecavalier and Jokinen would be one and two, with Jarnkork and Cullen able to slot into the 3C spot as needed.

Lecavalier is a former captain and a Stanley Cup winner. Being a former 50-goal scorer and elite producer, his name carries a lot of weight. He'd also be able to help fill the void the locker room that Patric Hornqvist vacated when he was traded. Now, since he didn't fit with Philly, he could be had at a very cheap price. On the surface, the trade seems like a no brainer that can only help Nashville. That is, until you start looking at what he would actually bring...

Lecavalier does not make the players around him better. In fact, in recent memory he actually makes the players on the ice worse. Sometimes the results are negligible, sometimes they are staggering. Back in February, Collin Mehalick from Broad Street Hockey dove into Vinny's struggles with the team, and looked at how he performed with his fellow players. The results are not good:

Vinny's WOWY from the first 59 games of the season shows that every single player that has shared over 83 5-on-5 minutes with Lecavalier gets a higher percentage of shot attempts when he's not on the ice with them. Every single player. Luke Schenn and Mark Streit, chastised for their own bad play at one point or another this season, look pretty dang respectable away from Lecavalier.

Yeesh. The last thing Neal needs to is to have someone dragging down his already strong possession numbers, although Fisher isn't much better with the guys he plays with. Craig Smith is also trending in the right direction, and having a black hole centering him could be dismal for his ongoing development.

Though his stats have steadily been declining the last three seasons, Lecavalier has still scored close to two 5v5 points per 60 minutes over that time. That's just ahead of Joe Pavelski, Derek Stepan and Matt Moulson, but right behind Jarome Iginla, Justin Williams and Patrik Elias. However, if we delve deeper into the numbers, things look a little concerning: 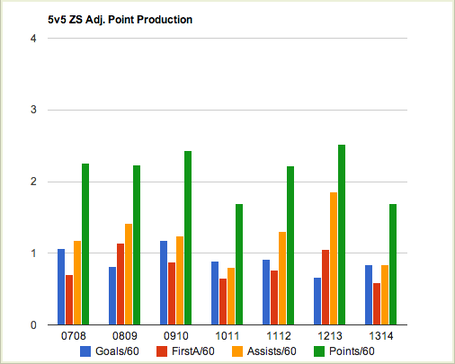 Collin also covered this deftly in his article, but since then we have all of the most recent season's data we can analyze a bit further. Basically, he points out that though the production increased in the above chart, his shot rates have been steadily declining in for years, as seen below. 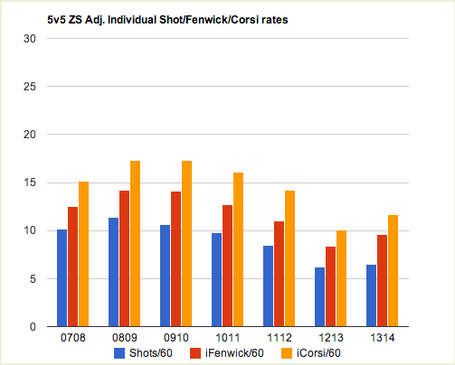 It was only a matter of time until it started catching up with him, and taking him away from Tampa certainly didn't help.

Now, there is a slight increase in his shot rates last year. Yet, given the stark decline over the last several years, it wouldn't be wise to expect anything higher next season. Moreover, although he scored at almost the exact same rate last year as in '10-'11, (despite lower shot metrics) his shooting percentage was vastly different. 8% that year vs. 15% in '13-'14. Should his shooting rates go down next year, (which they most likely will) and he scores at his career 12%, his overall production will again take a dip. It wont get any better for the following three years.

There might be some possibility that Vinny puts up better numbers than last season, but the evidence overwhelmingly suggests otherwise. Not only would he drag his teammates down and under produce, but Nashville would be stuck with him until 2018. Regardless of how little the organization has to give up for him, it's not worth the hassle of trying to slot him in, just to buy him out in a year. The Flyers are looking to get rid of him for a reason.

Lecavalier isn't some magic fix that will cure all that ails the Predators. They are better off biding their time (regardless of the screaming and yelling from the fan base) and making a bigger deal for a center in his prime, rather than looking for a quick, short term fix. Meanwhile, Jarnkrok can get a fair shot, and maybe Austin Watson finally gets called up for longer than a cup of coffee. In the long run, the team will be better off because of it.