The Best of the Season Tournament Round 1: Home Hysteria

Share All sharing options for: The Best of the Season Tournament Round 1: Home Hysteria

It wasn't so long ago that teams dreaded coming to Nashville, specifically because it was so hard to walk out of Bridgestone with a win. Between the exuberance of the fans and the general atmosphere of Broadway on a game night, home ice advantage was as real as hot chicken and sweet tea.

Well, victory wasn't a guarantee last season at The Bridge. The Predators were only 19-17-5 in their own barn, which sent scores of fans home disappointed more often than not. However, if you were one of the lucky 17,000 in attendance on either of these nights, chances are your throat was raw and your hands stinging red from the amount of high fives delivered.

The first meeting of the season between Nashville's most hated rival, as well as the first invasion of the traveling horde of souses. The Hawkblocking campaign didn't work so well, so Preds we were all just tickled pink at the gigantic shellacking the Blackhawks took at the hands of a marginal team.

Almost just as good? This directly followed probably the worst road trip of the season, where Nashville lost four in a row and was outscored 17-2 during that time. Everyone expected the worst, but the team seemed to be saving all of their goals and heroics for this one game.

Another win that was sorely needed. The Preds had lost five straight, and looked to be on their way to finally snapping that streak. But with less than a minute left in the game, Jeff Carter tied the game. "Here we go again," you thought. "This is why we can't have nice things," you thought. "Welp," you thought.

But before you even had a chance to reach for the remote to turn off the game, Fisher scored the go-ahead goal that sent the barn into a frenzy. The lede of NHL's game recap says it all:

The 17,113 fans who packed Bridgestone Arena on Saturday night went from sadness to euphoria in a span of 10 seconds.

Those with a heart condition recovered with a smile on their face. The rest of us developed one after this game. Hockey, ladies and germs. 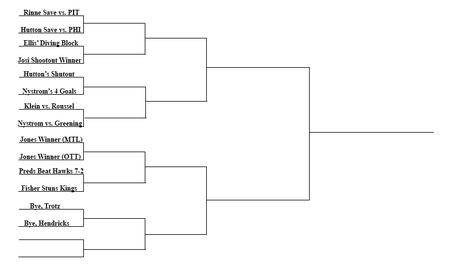