On Ryan Ellis: Deploying the Rocketship

INSIDE: References to "The Wire", Charts, and a Formula For Success. All pertain to Ryan Ellis.

Share All sharing options for: On Ryan Ellis: Deploying the Rocketship

Word has came out of the Predators' camp that the team and Ryan Ellis are "far apart" on his contract extension. This isn't terribly surprising; the young defenseman had himself a mighty good year and took a giant leap forward (Yes, Ellis took a giant leap FIGURATIVELY) in his development. It's not hard to see why he's wanting a little more money.

In today's game he's a valued commodity. Teams like the Blackhawks, Bruins, and Kings play a heavy possession style and play 4 lines and 3 pairs of defensemen. The Kings third pair of Alec Martinez and Matt Greene had a great playoffs, with Martinez scoring the series clinching goal in the finals.

What do those teams also have? Depth; it keeps your players fresher, and creates the key word of this here article:

For teams on a tight budget, it's a bit easier to have a superior third line against your opponent than to have a superior 1st line. The same holds true with defensemen, but the Predators already have a Shea Weber, Roman Josi, and a Seth Jones. Adding a pair like Mattias Ekholm and Ryan Ellis to the bottom of the rotation (assuming Anton Volchenkov gets paired with Jones) allows Ekholm and the Human Rocketship to play some possession-heavy minutes. 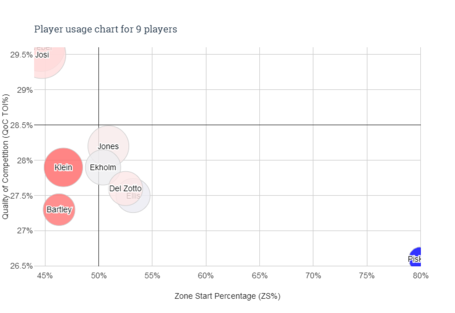 Both Ekholm and Ellis accomplished the rare feat of being a Preds defenseman with positive possession numbers during an entire season. (I see you, Joe Piskula.)

[I was going to compare this against the Kings chart, but that's a hard comparison seeing how they like possession and shooting and are winning stuff. It was a dumb idea.]

If you were to look up the top scoring defensemen last year, you will notice that Boston's Torey Krug slotted home 14 goals, good enough to tie him at 6th in the league. Pretty impressive for a guy playing 17:30 a night on a team that crowds the net. Why and how did he do this? Exploitation could be the answer. Krug played some relatively soft minutes, thanks to the Bruins' wealth that features Zdeno Chara, Dennis Seidenberg, and good two-way hockey in their forward corps as well. Somehow, there are people who think Patrice Bergeron doesn't belong in the conversation among the top 6 or 7 centers in the NHL.

If you want to see a spiffy graph to put this into context, here are the top 50 NHL Defensemen in terms of goals scored: 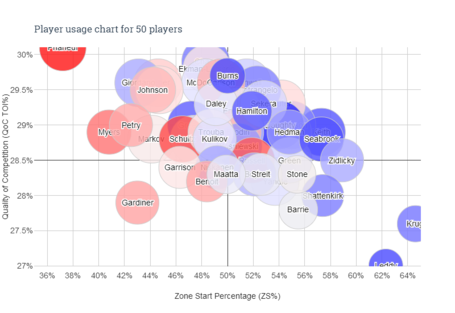 The Bruins' defensemen corps is similar to Nashville's; one all-world rockstar defenseman (Chara/Weber), Robin (Seidenberg/Josi), a prodigy (Hamilton/Jones), a crafty veteran (Boychuk/Volchenkov), and some kids. Here's how the B's used their defensemen. 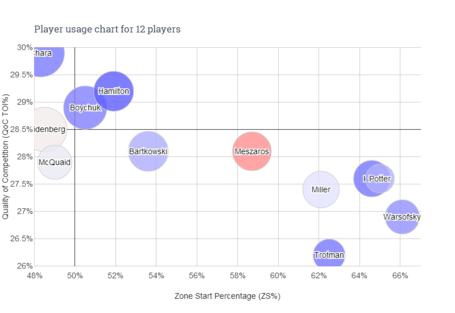 It's not hard to figure out what Claude Julien's plan was for the defense. Chara and Chara's friend play the real tough minutes, trust Boychuk's pair to play against the second line, and let Krug's pair play some exploitation minutes against the other team's grinders, and plenty of power play time. That sounds right up Ryan's alley, doesn't it? Krug had 6 even strength goals, one less than Chara.

We can only assume the Predators are moving to a more possession based system, which depends on the forwards not giving the puck up. If the Preds want to use their depth to their advantage, ditching the ol' dump and chase system should help them in their quest. It might also help that the guy tagged as the top line center isn't a "defensive specialist", and their second line center this year is a real second line center in the NHL. As Lester Freamon of "The Wire" would say: All the pieces matter.

If Ellis is back in Nashville for this next season, he might have another career year. If he's packaged up in a trade to consolidate the forward depth into a better forward, that's cool too. The goal of a team's coach should not be having all 18 skaters playing the same style, it should be making unique weapons out of each set of skills. Depth deployed wisely equals exploitation. If Ellis was to re-sign in Nashville, it may be the wiser choice for him.

All charts were created by ExtraSkater.com