The Best of the Season Tournament: Quarter Finals Part 1

The weak have been separated from the pack as the tournament rolls on.

Share All sharing options for: The Best of the Season Tournament: Quarter Finals Part 1

There were a couple of close match ups during the first round of our Best of the Season tournament, but most of the time the winners were pretty clear cut. Now that the lower seeds have been sent home in shame, it's time to see how winners stack up against winners.

An all "Nashville vs. Philadelphia circa January 16, 2014" bracket. Roman Josi may have been the one to officially end the Predators' night with a win, but Carter Hutton did the most inhuman thing he'll possibly ever do to get them to that point.

So at last, they meet for the first time for the last time.

The OTF comment section is filled with adoration for the once-Predator Kevin Klein. If we were in Westeros, songs would be sung about his glorious Klein-hawk, and his timely goals that seemed to make life worth living. He might even be able to lend his talents at composing, what, with the way he can play an opponent's chin and all.

Though I think the world is still having difficulty process just exactly what happened in Calgary on the night of January 24th. Eric Nystrom. Four goals. Preds lose. Nope, still doesn't compute.

If anything, these two contests have brought up an important question. Who'd win a dust up between Klein and Nystrom?

Cast your votes below to send two of these highlights on to the semi finals! We'll have the next batch up this weekend. 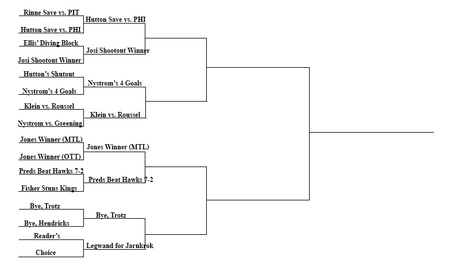