The Best of the Season Tournament Round 1: Canadian Nightmare

Share All sharing options for: The Best of the Season Tournament Round 1: Canadian Nightmare

It wouldn't quite be the offseason without milking two highlights that we've used ad nauseam on this blog. I'll just say that's the case because they are both really, really, really freaking good. You can decide which one is better...

No matter what defensive lapses he had in his rookie year, Seth Jones can be forgiven with this laser beam of freedom that stole a point away from the Canadiens. Eight games into the season, this spectacular play made even the most cynical of Jones doubters think, "Okay, maybe drafting him was a good idea."

I want to frame this and put it above my mantel. I also want to get a mantle.

Everything about this is glorious. Colin Wilson being a tough guy. Ryan Ellis embodying his nickname. Seth Jones cashing in on the hard work of someone else. So American.

Granted, this game shouldn't have even gone to overtime, but you can't argue with results.

One of these highlights causes eagles to weep tears of joy. Which one is it? 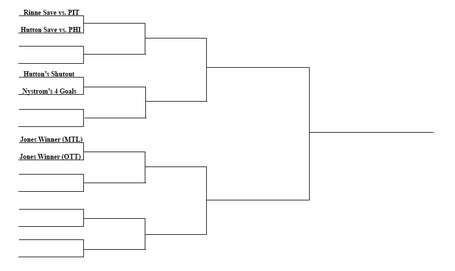