Pekka Rinne had his worst season in 2013-14. He needs to vastly improve from last season if the Predators want to even think about making the playoffs.

Share All sharing options for: Pekka Rinne Season Preview: A Return to Form

Rinne has been a top goalie in the NHL virtually since he entered the league, and we shouldn't expect anything worse moving forward. Last season was a brutal one, but a sample size of only 24 games played and 645 shots against is much too small to draw any conclusions, especially for a goalie whose career numbers show he is much better than what we witnessed last year. @BehindTheNet found that we need a sample size of about 3,000-5,000 even strength shots (even more for all-situations) to know a goalie's true talent level. Others, like @garik16 over at Hockey-Graphs, have used sample sizes around 4,000 shots for their analyses. Once a goalie reaches about 5,000 shots or more, we have a decent opinion about how good he is. In all, Rinne has faced over 8,000 shots in his career so we can be fairly confident that Rinne's career numbers are the better indicator to future performance than his lackluster numbers last season.

Let's take a look at Rinne's even strength save percentages by season since 2008-09. 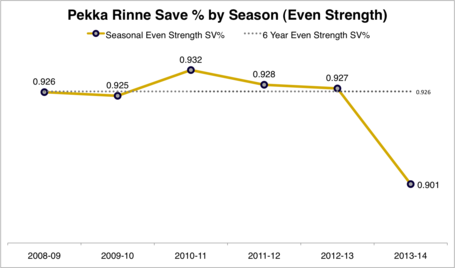 As I stated earlier, his 6 year even strength save percentage is .926. We can see from the graph that every season aside from last year was fairly impressive and consistent. Again, I am inclined to believe that his poor numbers resulted from coming back from injury and playing in only 24 games behind a struggling team.

What difference would Pekka Rinne make?

Would a healthy Pekka Rinne have put the Nashville Predators in playoff contention?

Offseason surgery, a lengthy recovery, then an even longer recovery from the recovery pretty much torched the season for the Preds most important player.

What difference would Pekka Rinne make? Pekka Rinne 2013-14 Review: A Season in the Abyss

Rinne being healthy is not be the only reason to expect improved numbers however. Adding in Peter Laviolette should help give the Predators an improved offensive game. While an improved offense doesn't correlate with less shots faced, it should help provide much needed goal support for Rinne. Now, there may be concern bringing in a coach not praised for defense like Trotz was, but the numbers suggest this may not be a valid concern. Since Rinne became the full-time starter in 2008-09, Nashville ranks 15th in 5 on 5 shots against per 60; a good rate but nothing incredible. In the last three seasons, they rank 14th in 5 on 5 shots against. It appears the Nashville Predators had relative defensive success over the years because of Trotz' system, but it also appears Rinne may have factored into the team's overall success just as much as Trotz did. Without an elite goalie in net, Nashville would have found it tough to make the playoffs with decent defensive numbers and mediocre goal scoring. Just look to last season to see how that worked out.

In all, I expect Rinne will have a much improved season compared to last year. According to CapGeek, Rinne is tied for the second highest cap hit among goalies with Tuuka Rask, both at $7 million per year trailing only Henrik Lundqvist with a cap hit of $8.5 million. For better or worse, Nashville has built their team from the net out. If they want to even think about making the playoffs, Rinne will have to be the one to get them there, and there's nothing indicating he can't do that again.

Rinne returns to form and posts an even strength save percentage close to his 6 year average of .926 and, once again, is a top goalie in the league.

Last year was not due to injury issues and a small sample. He is depreciating in talent and will post an even strength save percentage of .915 or below. His contract then becomes a huge issue.

Rinne posts an even strength save percentage of .935, people realize GAA is an archaic stat, Jonathan Quick is finally labeled "average", and Rinne wins the Vezina.

Mongoose (no specific species...yet). The mongoose has some of the best reflexes of any mammal. I may even start calling Rinne "The Mongoose" because 1) it's a perfect fit 2) hockey nicknames are easily the least creative nicknames.