Best of the Season Tournament Round 1: Exit Strategy

Share All sharing options for: Best of the Season Tournament Round 1: Exit Strategy

Some may not consider a jettison of personnel to be noteworthy for a bracket brawl, but the shuffling off of Matt Hendricks' contract and the inevitable letting go of Nashville's only bench boss is the type of maneuver that has the Predators looking to be contenders for a playoff spot and quite possibly the most exciting off-season since Paul Kariya.

David Poile made some questionable decisions over the last few years. An abundance of overpaid contracts for lss than stellar players had Hendricks brought in for $1.85M for four years. *Slaps forehead* Another decision to keep head coach Barry Trotz after the Phoenix collapse two years ago might fall under the head-scratcher category. Thankfully, both these decisions were availed.

Poile was able to shed the unbelievably bad contract of Matt Hendricks for the sometimes-starter Devan Dubnyk. On top of that, Poile got Edmonton to eat half of Dubnyk's salary in the deal. Hendricks had four points...yes four points...in the 44 games he played for the Predators in 2013-14, and abysmal metrics to boot.

Dubnyk may have been used as the quintessential chess piece to light a fire under Hutton and Mazanec but as the games unfolded, Dubnyk was an even bigger liability in net. No worries. Poile comes through again by trading Dubnyk to the Canadiens for future considerations. So here's the skinny version:

The Nashville Predators had one man in charge since their inception in 1997: Barry Trotz. The diminutive figure was a staple behind the bench and a master at getting the most out of the player pool that a cash-strapped new franchise could muster. Nominated twice for the Jack Adams award for top coaching honors, Trotz was lauded and applauded through much of his NHL career barring the last two seasons.

Never quite able to take Nashville to the next level, Trotz coached the team to two consecutive second round appearances. The first resulted in the overwhelming play of the Vancouver Canucks to outright take Nashville to the woodshed. The next year, a stacked Nashville squad succumbed to the Arizona Coyotes by being thoroughly out-coached at every instant by Dave Tippett. The season after was lackluster and predictable as the playing style of the Predators became solidified in the defense first model that Trotz has employed for years.

The stagnant playbook cost the Predators two seasons of not making the playoffs and sealed the envelope on Coach Trotz's status in Nashville over the summer with his non-renewal. On the flip side, the new direction under Peter Laviolette could make for exciting offensive hockey the likes Nashville fans have yet to see since the acquisition of a pure offensive talent in Paul Kariya.

Wizardry versus a poignant moment of relief, but each made the Predators a better team in the long run. What gets your vote? 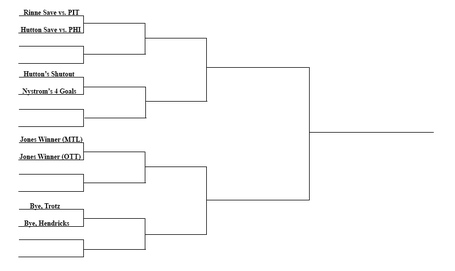