The Best of the Season Tournament Round 1: The D Steps Up

Share All sharing options for: The Best of the Season Tournament Round 1: The D Steps Up

This is the most Nashville Predators video clip ever. Ser Stalberg of Stonehands misses a primo scoring chance (on Ondrej Pavelec of all people) then Carter Hutton fumbles a shot seconds later. The defense getting down and dirty is the only reason the red light didn't go on.

Michael Del Zotto and Ellis may have been caught napping, but post awakening grogginess didn't stop the Rocket from making up for his lapse with an amazing diving save. In hindsight, it's really disappointing that Andrew Ladd and Devin Setoguchi scored after this, negating a win.

Good lord were the Predators terrible in the gimmick this season. Like, super not okay. New Jersey, winners of zero shootouts all season, were the only team worse.

Josi is responsible for exactly 50% of the Predators #skillz wins in the 2013-2014 season. It was actually a pretty dramatic one, given that Hutton went into save the president mode earlier in the game, and Nashville's shooters were so ineffectual in the extra frame, Barry Trotz threw waves of defenseman at Steve Mason. (You can watch the full shootout here.)

The Swiss Olympian ripped a page right out of Matt Hendricks' book and deked Mason right into the dressing room. In all seriousness, the move itself was sick and deserved to be the final shot of the game.

And as if that weren't awesome enough, the ensuing scrum of celebration was just adorable:

Which defenseman defensed with more style? 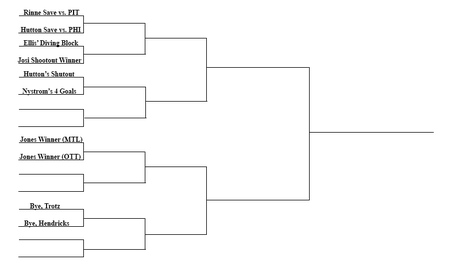