The Best of the Season Tournament Round 1: Pugilism Edition

Share All sharing options for: The Best of the Season Tournament Round 1: Pugilism Edition

Lesson learned: You don't want to open that door with Kevin Klein.

This year Klein had a nice bout with Antoine Roussel, a player nicknamed "Big Rig" by the Dallas folks. With a face only his mom loves and a haircut that scream "BUSCH LIGHT", Klein dispatched the youngster with relative ease.

(Ed. note: The fight against the Rangers (pictured above) was an honorable mention, but the Stars one takes the cake.)

NO KIDDING. WAR DAMN KLEIN. Klein may look like a guy who is selling firewood somewhere between Clarksville and Joelton, but he doesn't fight like a redneck at all. His punches land, and land squarely.

Hey, Nystrom tries. And you get the feeling that he' s not just "LIKES TO FIGHT" guy, like a Brian McGrattan. Eric Nystrom can actually play hockey, and he's only fighting to make sure other guys on the team do not receive chipped teeth or separated shoulders. He's going for the whole "LOCKER ROOM" guy role, which is great because the Preds are likely married to this guy for another three seasons.

True, Nystrom did get his bell rung at least once earlier this year. It's part of this role he's trying to earn.

You'll notice there isn't a Clune fight on here. Well, which one do you want us to use? The one where he KO'd a kid, or the one where he got KO'd by a kid? Nah, we're rolling with DJ BobbyNy. 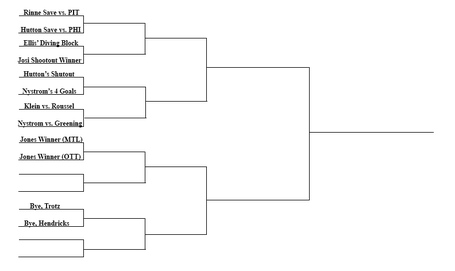