Inside the Rivalry: Minnesota Wild

As our coverage of Predators rivals continues, we take a look at our expansion team brethren, the Minnesota Wild.

Share All sharing options for: Inside the Rivalry: Minnesota Wild

Nashville has been in the same division with Minnesota for only one season, but a rivalry has been simmering for several years. The Predators and the Wild already compete against historically successful teams in their division in Chicago, Dallas, and Colorado. The recent success of St. Louis makes the Central division even more crowded (sorry, Winnipeg). So as cohorts of the expansion era, how has the Predators and Wild rivalry grown?

Neither team has built a consistent, winning, championship level brand of hockey since expansion. Sure, the Wild made it to the Western Conference finals in 2003 and the Predators came within 4 points of a Presidents' Trophy in 2007. But both teams have empty trophy cases and now find themselves in a division with each other. The immediacy and similarity of the two teams creates a natural rivalry and there has been evidence of that on the ice. There have been some memorable fights (Tootoo vs. Stoner was my favorite) some heartbreaking comebacks (Mike. Freaking. Fisher), and, oh yeah, some notable front office moves.

For what it's worth, it doesn't appear that Minnesota fans really have any beef with Nashville. And I am not convinced that Nashville fans have one with Minnesota fans either. The rivalry has only recently been sparked, but the flames grow higher each year.

In 2012, Ryan Suter moved from a thriving, hip, southern locale with four different seasons and a dynamic culture to a barren, white-bread, wasteland with a superfluous mall. Instead of being paired with the league's best overall defenseman, he is paired with some other guy. He could have been part of a dominant top 4 defense crew in Suter, Weber, Josi, and Jones. He could have helped us reach the playoffs the last two seasons. He could have led us to a deep playoff run. He could have learned to play guitar from one of the thousands of guitar teachers in Nashville and played on the Ford Band Stage at intermission. He could have been friends with Carrie Underwood.

But instead, during hockey season, he lives here:

The best game against the Wild last year also happens to be the last game the Predators played: the season finale.

The Preds poured in 7 goals (just 24 hours after having done the same thing vs. Chicago) as the Preds finished their season on a 3 game win streak. Smith and Jarnkrok combined for 7 points, the Preds scored 4 goals in the 2nd after going down 3-1, and even Rich Clune scored.

The Moment This Became a Rivalry:

First, in 2008, Craig Leipold bought the Minnesota Wild after having "sold" the Nashville Predators in 2007, claiming some of the worst business losses of his career. It was a necessary and shrewd business decision, we were told. Since this guy made BlackBerrys, and both are terrible, the sale defaulted. A group of local executives, Predators Holdings, LLC, saved the Predators at the last minute. End of story, right? No.

Leipold's actions challenged the belief that hockey can thrive in Smashville.  It seemed to say, "You didn't actually think this would work, did you?" and the numbers seemed to agree with him. We had to watch, helpless, as our beloved team was weighed, measured, and bartered by fiscally unrepentant CEOs and their juries of the almighty dollar. It wasn't a slight, it wasn't an insult; it was a divorce. Our town wasn't the right fit. Our team couldn't work here. Our franchise had failed.

I Turn My Back For Just A Few Days... 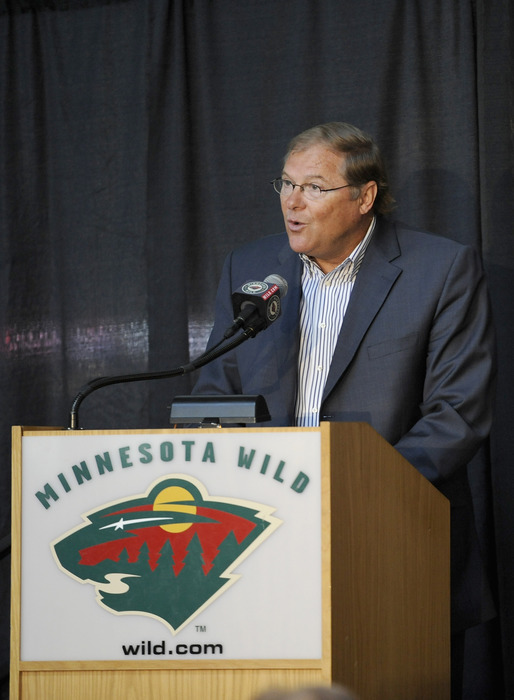 I Turn My Back For Just A Few Days...

Then Leipold bought the Minnesota Wild. It didn't take long before dad started showing off his new girlfriend and buying her nice things. In Nashville, we were left an uncertain future. How would the new CBA affect our small market? How do we create winning, value-based hockey? How do we sell tickets to a football frenzied community? How do we make this team and this franchise happen?

Well, we did it, Craig. We made it happen. We've increased attendance roughly 10% since you left us, while your team's attendance had its lowest attendance marks ever in '09, '10, and '11. Our team value has increased 20% since you left us, breaching the $200 million mark for the first time in history. Your new team's value is an attractive $330 million, but you are only 5 teams ahead of us on the NHL team valuations list. Did you really need to own the 19th most valued team in the NHL, Craig? Was 24th not good enough?

You've made your $70 million back it would appear, BUT ARE YOU TRULY HAPPY?

Yes, Craig Leipold gave us an NHL franchise. But then he nearly gave it to Canada. You don't buy your kids a Christmas gift and then pawn it later because you need to pay rent.

The second moment was when Suter signed with the Wild, obviously. For that we should "kick their butts," according to the current head coach of the Washington Capitals.

Minnesota has absolutely no excuse for allowing this song to be written: