Coming to a living room near you.

The Predators released their schedule for the 2014-2015 season, and there aren't a whole lot of surprises.

Fox Sports Tennessee will be covering the bulk of the games, with SportsSouth picking up two games. The Predators get their national exposure only once this year, with a game on NBCSN in February against Minnesota. Make sure to be extra loud for that one, Bridgestone Arena.

Of course, it wouldn't be a Preds season without several games of no coverage at all. There are six games this year that won't be broadcast in Tennessee. You'll either have to have a subscription to NHL Game Center Live or Center Ice to be able to view it. First world problems, eh?

Also of note, Buffalo Wild Wings is going to be the official watch partner of the Nashville Predators. See ya later, O'Charley's.

Below is the full press release from the Predators, along with the schedule.

"The Nashville Predators relationship with FOX Sports Tennessee continues to strengthen, doing more each year to provide our fans with unprecedented access to watch the team," Predators President/COO Sean Henry said. "With 75 regular-season games, Predators Snapshot and the addition of the new Predators LIVE! pregame show and improved postgame show, FOX Sports Tennessee continues to remain the premier place for Preds fans to receive the most comprehensive coverage before, during and after games."

Coverage begins with the Predators’ regular-season opener on Oct. 9 against the Ottawa Senators (7 p.m. CT), which will also be the first time fans can get a look at the new Predators LIVE! pregame show. Other highlights from the 2014-15 telecast schedule include four games against Central Division rival Chicago Blackhawks and five games against Central Division rival St. Louis Blues. Additionally, the final 27 regular-season games (Feb. 28- April 11) will be televised on FOX Sports Tennessee and SportSouth (26) and NBC Sports Network (1).

The play-by-play voice of the Predators on FOX Sports Tennessee since the dawn of the franchise in 1998, Pete Weber, returns for his 17th season on Preds telecasts. This year, Weber will be joined by analyst Stu Grimson, who fans may know from his previous role as a rink-side reporter for home games during the 2013-14 season. In addition to his past rink-side reporting role, Grimson has worked for the past six seasons as color commentator on the Predators Radio Network and played 30 games for the Predators during the 2001-02 season.

Joining Weber, Grimson, Crisp and Howard as part of the FOX Sports Tennessee team will be Lyndsay Rowley, who is taking over the reigns as the Predators rink-side reporter during all televised home games. In this position, Rowley will help bring Predators fans closer to the action with in-depth interviews, special features and more. Throughout the season, the entire broadcast team will join Crisp and Howard at Predators LIVE! and be featured alongside Predators players and personnel in FOX Sports Tennessee original programming such as Predators Snapshot.

Fans should also take note that Buffalo Wild Wings will enter their first year serving as the official away game viewing-party headquarters for the 2014-15 season. All televised Nashville Predators road games will be available for viewing at all Middle Tennessee Buffalo Wild Wings locations. 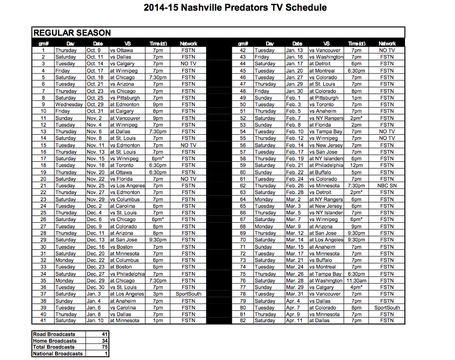