Gnash goes on injured reserve, gets mocked by Ken Campbell

Chill, this is all a joke anyway, people.

Share All sharing options for: Gnash goes on injured reserve, gets mocked by Ken Campbell

The Nashville Predators announced some disturbing news to coincide with the wave of crazy injuries happenings all over the preseason landscape right now: Gnash is heading to injured reserve.

"Predators mascot Gnash suffered a broken fibula in his left leg and is being treated by a team of physicians and trainers from Vanderbilt University Medical Center and the Nashville Predators," Predators Senior Vice President of Communications Gerry Helper said. "We expect him to make a full recovery in six-to-eight weeks and look forward to his return."

While their specialty is not veterinary medicine, the team of physicians treating Gnash at Vanderbilt University Medical Center were surprised to find, upon examination, that the bone structure of this saber-toothed tiger is quite similar to that of a human being. A special case and a special patient, the team from Vanderbilt University Medical Center is giving Gnash the best care available and are working in conjunction with the Nashville Predators training staff to ensure Gnash is back on his feet and swinging from the rafters again in the near future.

The release included a video of our beloved mascot getting into what would probably be considered as "the best shape of his life":

It can't be easy to workout when you have a much smaller human being writhing around inside of you, so major props to you, old friend

Yet, we found we had a snake in our midst. Not content with being an ancient and fun-destroying curmudgeon who hates rainbows and happy children The Hockey Enquirer New's Ken Campbell decided to add insult to fluffy injury.

@kevin_mcgran @Gnash00 Anytime a mascot goes on the injured list, it's a good day.

"@THNKenCampbell: @kevin_mcgran Anytime a mascot goes on the injured list, it's a good day." Sleep with one eye open Ken.

@Gnash00 @kevin_mcgran What are you going to do, hug me to death?

But Gnash is a fighter. We all know that whatever the obstacle, whatever the adversity, our favorite feline will overcome it. There is no quit in his game, because of grit and stuff.

"@THNKenCampbell: What are you going to do, hug me to death?" You do know silly string is flammable.

GET READY, KEN! Your hand will find its way into warm bowls of water whilst you slumber. Your doorbell is going to go berserk, but when you answer the door there won't be a soul in sight. Inquiries about the operation of your refrigerator will be incessant. This is your life now, Mr. Campbell, and you have no one to blame but yourself. When the entire city of Nashville gets wind of this, we'll just want to... it makes us so...

DOES THIS LOOK LIKE THE FACE OF MERCY TO YOU??? 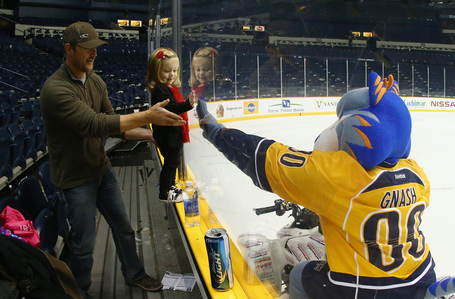