His first season was a surprise, and his second season was the unfortunate sophomore slump. But his third season, the breakout season, happened as planned and Craig Smith became a contender for top line duty as well as another great talent from the Team USA system.

Share All sharing options for: Craig Smith Season Preview: The Other Captain America

Craig Smith may very well fill the void left by the trading of Patric Hornqvist.

Smith is a deceptive player that lurks around the high-scoring areas, ready to pounce on a loose puck or straight roof a laser to the top corners. With 24 goals and 28 assists last season, he ranked third on the Predators in scoring and second among forwards behind the departed Hornqvist. His +16 led all Predators and his stinginess with the puck translated to a Corsi On of 1.76 and a Corsi Relative of 7.5. It is also of note that Smith had 50 takeaways on the year, good for second on the team behind Hornqvist yet again.

A Leap in the Right Direction

Craig Smith had his best season so far by a large margin. It's now up to him to keep those good times rolling.

A Leap in the Right Direction

He is agile, has a great shot and is motivated now with the absence of Hornqvist to excel on the top two lines of Nashville. With Laviolette in charge and a puck-possession style of play forthcoming, look for Smith to be on the rise and hit the 60-70 point mark with Neal and Ribeiro on the top line.

Craig Smith continues his fevered pace from last year ending on a four-point note and continues with even better linemates to become a legit top forward under Laviolette. Quick fan stat from last season, Craig Smith had twelve multi-point games out of the 79 games played...that's 15.19%. Imagine how the offense would look if he improved that by even a few percentage points.

Craig Smith regresses to his 2012-2013 lockout shortened season where he was as snake-bitten as when he shot the puck over the empty net against Toronto in his first year. It's hard to believe this could happen with the talent brought in through off-season moves, so the real worst case scenario would be injury of any kind.

Craig Smith gets his first NHL hat trick on the third game of the year against the Flames. Heck, even Nystrom dropped four goals on them last year and Smith had five games last season with two goals. He's due. 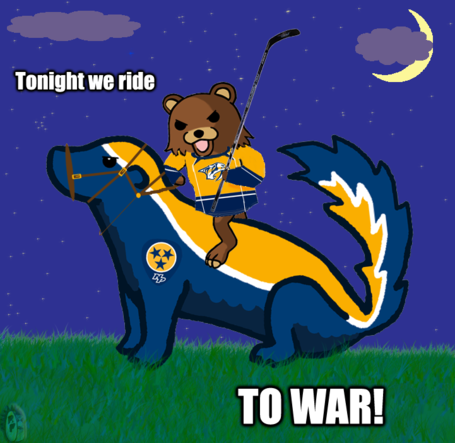